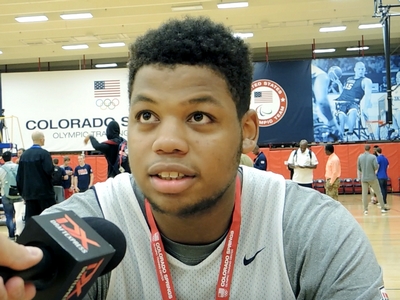 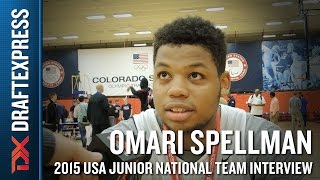 Strengths
-6' 9' with a 7' 2 wingspan
-Can really offensive rebound. Uses his strength and mobility to overpower opponents or beat them to the spot.
-Fairly light on his feet despite being 287 pounds
-Impressive touch on his jumper for a player that size. Can stretch it out to three. Comfortable facing up, jab stepping and stroking mid-range jumpers.
-Soft hands
-Nice touch out of the post.
-Doesn't shy away from contact at all
-Very good basketball instincts

Weaknesses
-Way overweight at 287 pounds. Coming off of an injury, which may have contributed to the high weight (was only 269 pounds at the Nike Academy)
-Struggles with pace of play. Gets tired easily.
-Has issues finishing over length. Surprisingly fleet of foot but still isn't an explosive leaper, especially from a standstill.
-Doesn't get great extension on his jump hook
-Better offensive rebounder than defensive rebounder at this stage
-Motor runs hot and cold, in large due to his conditioning
-Lateral quickness is average. Is he quick enough to guard power forwards?

Outlook: Spellman has an impressive skill set for a player at his size, showing an ability to make shots consistently with range and crash the offensive glass aggressively. He has nice overall basketball instincts and most definitely doesn't shy away from contact on either end of the floor. The biggest question for Spellman, however, revolves around his weight. He's very skilled for his size and has good length for his position, but Spellman will most likely always be limited by his weight if he continues to play up in the 280-pound range. Assuming Spellman is able to get back to the high 260s like he was at Nike Academy, he's certainly poised to turn in a very impressive career at Villanova as a skilled big who can mix it up on the interior and also step outside at times as well. From an NBA standpoint, he will have to find a position he can guard before he can be seriously considered, which will likely come down to how his conditioning evolves.
Read full article