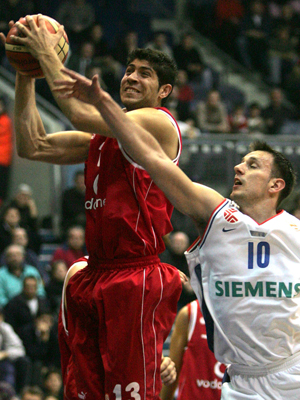 An American Perspective on Europe: The Wings

Jonathan Givony
@DraftExpress
The third age eligible 1984-born player on this list, Vasilopolous plays at the highest level of competition of anyone mentioned here so farfor Greek powerhouse and Euroleague participants Olympiakos. Vasilopolous has been through all the various national team levels over the past four years and should be a very familiar name for NBA scouts. He was on the roster, but barely played, for the Greek senior national team that won the Gold medal in last summers European Championships in Belgrade, and was one of the stars of the Junior Greek team that competed and won medals at the various European and World competitons. His team Olympiakos made the Top-8 stage of the Euroleague this past year where they lost to eventual Finals participants Maccabi Tel Aviv, and Vasilopolous was a key contributor on that team and averaged 20 minutes per game in 21 contests.

Beyond his high-level experience, there are a number of things to like about Vasilopolous. First would be his physical attributes, featuring good size and length for an NBA small forward, solid strength and an excellent frame. He is a good athlete with a very nice first step, and is quick off his feet with surprisingly good leaping ability.

Vasilopolous is a versatile player who does almost everything pretty well, whether its slashing with either hand, shooting 3s with his feet set, passing, rebounding, blocking shots or just running the floor hard. He is a tough player who does not back down and is willing to get into a player's grill if needed, even getting a little dirty if the situation calls for it.

Being a 22 year old who gets plenty of burn for one of the top teams in Europe, he is a smart and reliable player, as you would expect, with a good feel for the game. He doesn't make many mistakes and generally plays for the team. His passing skills are particularly impressive, especially passing into the post. Vasilopolous likes to move the ball around unselfishly and regularly finds the open man with crisp passes.

Playing both forward spots in Greece and the Euroleague, he is a very solid rebounder who knows how to box out and goes hard after every ball. His hands are very good and his athleticism and instincts help him do the rest. Spotting up from the perimeter, he shows good shooting mechanics on the catch and shoot and hits his shots at an excellent clip46% from the field and 51% from behind the arc.

In terms of weaknesses, there are questions about his NBA position, as he plays the power forward spot in Europe, but is only about 6-8. He is first and foremost not an incredible athlete, but hes also not a bad one either. He might be missing that slight extra gear needed to create enough space to get his shot off in the NBA, and already isnt an incredibly prolific scorer at the European level, averaging only 8 points per game. He could stand to slim down to small forward proportions for his body to truly reach its full potential as a wing.

Vasilopolous perimeter skills in general need to be polished. He is not a dangerous enough threat to attack matchups off the dribble, and can be a bit mechanical and predictable in his movements. As a shooter he is limited mostly to the catch and shoot, featuring a fairly slow release and not much elevation on his jump-shot.

On the other end of the floor there are questions about whether he can defend his own position in the NBA. Playing mostly power forward, he lacks real experience guarding the perimeter. He regardless does not his move feet well enough, and his lateral quickness might not be up to par.

More than anything, it sometimes appears that Vasilopolous is not 100% comfortable in his own skin. As much as he limits mistakes, he also rarely tries to do anything incredibly creative, looking like he is playing on a fairly short leash at times.

As far as NBA comparisons go, Luke Walton might be the best one. Possessing a fairly unique skill-set and plenty of high level experience, he still has upside to continue to improve. If a team drafting in the mid to late 2nd round doesnt see anyone that they think can make their roster available, he could be an intriguing guy to draft and stash for a few seasons until his contract is up in 2008.
Read full article

Dimitris Ritsonis
@DraftExpress
The talented all-around Greek wing has been exactly what most people expected so far, showing glimpses of his skills, but also the typical instability which was caused partially by his team's continual rotation difficulties, as well as from the minimum experience that he had in a competition level like the Euroleague.

Playing for Olympiakos, a young and newly built team, without many big men in its frontline, Vasilopoulos spends most of his minutes at power forward. This is not an ideal situation in this type of league considering his size, as hes had to face some of the most talented and experienced opponents to be found. He has indeed been outplayed every time he couldnt keep them outside of the post. It is clear that this terrific perimeter defender is far from becoming a great inside player, standing barely at 6-8 and with so many small forward skills and finesse that are going completely to waste.

Moreover, Vasilopoulos has been unstable offensively too. Being inexperienced, he leads Olympiakos in turnovers, proving his coach wrong at times for giving him extended playing time. His decision making, which is so obviously superior both in making plays and scoring in the youth competitions, was often poor and questionable, typical of a player his age, even if it is obvious that there are not many players around with Vasilopoulos' mental potential.

However, a nice set of athletic skills, a fine shooting touch, an ability to play as somewhat of a point forward and some moments when he seemed to be Olympiakos' MVP on both sides of the court have also been an important part of the story for Vasilopoulos. Some excellent games over the past two weeks over strong opponents both in the Euroleague and the Greek A1 show that the 21-year Vasilopoulos can very soon overcome any typical rookie challeneges and boost his game from being a role-player to a leader in Olympiakos' attempt to reach the top-16 round.
Read full article

Strengths
Panagiotis Vasilopoulos is a player with very specific strengths to his game, which is based around his mental strength and defensive play. Looking more experienced than his age, he understands well the need of a player to work for his team and attempt fewer shots than expected in order to make sure that all baskets will be a product of team work and that the best shot possible is found to maximize the possession. When he is needed, he can take over on the offensive end; he is a fine shooter, confident, fairly athletic, versatile, has a nice vertical leap and his passing abilities are above average. Defensively, he uses his strong and well-built body in order to stop his opponents, either in the post or more successfully on the perimeter. He can control his body well and is able to commit smart fouls when needed, while it is no problem for him to chase smaller players, as his feet are strong enough for him to simply do it. He is a really good rebounder and despite his small size, he is a steady blocker. In general, although he has very good offensive characteristics, his role on his team is more defense-oriented.

Weaknesses
Vasilopoulos' skill level just isn't that high. One cannot find any specific field that he excels in and that's something that hurts NBA potential. The same way that he doesn't have many flaws to his game, it becomes clear that he is not extremely gifted in any field.
Moreover, he is not selfish enough offensively. This is a similar case to Sergei Monia, but Vasilopoulos does not play for Europe's best team. He plays for more than 20 mpg and only attempts 2-3 shots per game. This is pathetic for a player who does not lack offensive skills. His athleticism is fine, but he is still raw and he will struggle for a couple of years, if he ever joins the pros. Players like him with potential, but with small size and limited penetration skills usually need to work more in Europe in order to be contributors for an NBA team.

Comments
I cannot see any way that this player will not improve. It is very rare to see mentally strong players not making their goal. The issue is what is his goal. Because if he wants to play in the NBA, he has to take over his team as soon as possible. If a team wants to make him a draft pick may see him improve instantly, but someone has to explain him that he has to have some initiative too.

Facts
He was the 4th best scorer for the Greek Junior National Team in the Junior World Championships of 2003, for a team that finished third. He was the top rebounder and 2nd best scorer for the U-20 National Team in last year's European U-20 European Championships, where Greece finished 4th. He is considered as one of the best defensive players in Greece. Statistically, he ranks in the top-10 for blocks per game in A1. It is quite likely that he will be called up for the 18-man squad of the National Team of Greece for this year's Eurobasket, but has limited possibilities to make it in the final-12 squad.
Read full article