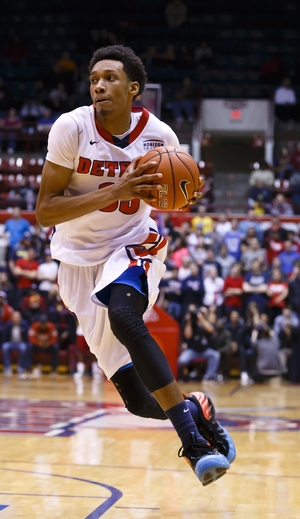 Arriving at Detroit at age 17, Paris Bass was forced to redshirt his first year on campus because of issues with his transcripts and the NCAA Clearinghouse. Viewed as somewhat of a tweener who didn't frequently face elite competition in high school or AAU play, Bass wasn't heavily recruited, selecting Detroit over Kent State, Rhode Island, Louisiana Tech, Eastern Michigan, and Rhode Island out of Seaholm HS (MI).

Despite his humble beginnings, Bass made a splash as a redshirt freshman, during which he averaged 12.3 points and 5.6 rebounds per game, and received an invitation to participate at the 2015 Nike Academy. Making the most of his opportunity to shine in front of the scouts in attendance, Bass earned some buzz in NBA circles with his performance. With the Titans' only other double-figure scorer, Juwan Howard Jr., graduating last spring, Bass figures to have every opportunity to plant himself firmly on the NBA radar with a productive sophomore year.

Measured at 6'8 in shoes with a 6'11.5 wingspan, Bass has impressive size for a small forward and the athleticism to match. More fluid than explosive, Bass shows the ability to play above the rim in space, dunk tip-in opportunities, and finish lobs, but lacks blow by quickness and freakish leaping ability. He's very skinny at this stage, tipping the scales at a little under 200 pounds, and will need to continue adding muscle to his frame in the coming seasons.

Spending much of the season sliding over to the power forward spot to make room for Howard at the three, Bass was granted tremendous freedom offensively and did a little bit of everything for Ray McCallum Sr.'s squad. Emerging as a starter just before Christmas after providing a valuable spark off the bench for the Titans throughout the early part of the season, Bass was ultimately named the Horizon League Newcomer of the Year, thanks in large part to his versatility.

Bass saw 20.1% of his possessions in transition, handling the ball on almost half of those opportunities, where he given the green light to push and create for himself in the open floor. A capable ball handler for his size with terrific speed and fluidity, Bass plays a little too fast for his own good at times, but thrived when the Titans went up-tempo a year ago, shooting 70% on the break.

In the half court, Bass was not quite as effective, shooting just 41%. Seeing considerable opportunities to create off the bounce for a freshman forward, Bass saw a steady diet of pick and roll and isolation possessions to go along with a significant number of spot ups and put backs as well. Playing a fairly unique role, Bass's ability to use herky-jerky hesitation moves and changes of pace to turn the corner is one the most impressive elements of his game at this stage. He settles for some low percentage floaters and midrange attempts attacking the rim in the half court, and lacks the strength to score through contact consistently, but makes some impressive plays using his long strides to weave through traffic, draws fouls at a decent rate, and still manages to shoot a solid 57% at the rim in the half court overall.

Away from the basket, Bass has a lot of room to grow. Taking just as many shots from the perimeter as he does around the rim, Bass wasn't shy about trying to exploit slower forwards who didn't want to guard him away from the rim. Making just 29% of his pull ups and 36% of his catch and shoot jump shots, Bass shoots the ball with a long, slow release, and gets very little elevation. Shooting 36% from beyond the arc a year ago, Bass is a threat from deep, but has yet to reach his potential as a perimeter threat and must improve on his 65% shooting from the line.

Outside of his ability to score, Bass is a decent passer, but not a natural facilitator, appearing most comfortable looking for his own offense. A bit turnover prone at times, he isn't particularly selfish either, though it will be interesting to see how he handles what figures to be a much larger role as a sophomore. A solid rebounder as well, Bass does a nice job crashing the glass on the offensive end especially, and pulls down a very respectable 8.3 rebounds per-40 minutes pace adjusted overall.

Defensively, Bass's length and quickness made him a fairly productive player on paper. Averaging over 1 block and 1 steal per game for the Titans, Bass played a role in Detroit's success forcing turnovers, but nonetheless has plenty of work to do to develop as a defender. Moving his feet well defending the ball one-on-one some possessions, Bass struggles at times on this end of the floor too, as his fundamentals leave a bit to be desired. Not always finishing possessions by getting a hand up and losing his man defending off the ball, Bass nonetheless has some impressive flashes contesting shots and keeping guards out of the paint, and could grow into a very good defender in time.

Playing for a 15-18 Detroit team, Paris Bass received little national attention a year ago. A candidate to play a huge role this season, there's a good chance that the Titans' fortunes will rest heavily on Bass's shoulders. If he can show improvement as a defender and shooter and shows well in early season matchups with Vanderbilt and Pittsburgh, Bass could begin building his resume and emerge as a legitimate prospect down the road.
Read full article

One of the lesser known prospects in the college group, Bass' combination of physical tools, defensive potential and playmaking ability make him a very intriguing prospect to follow as his body, decision making and jump shot continue to develop.

Sporting a 6' 8 frame that has room to fill out with an impressive 6' 11.5 wingspan, Bass has ideal physical tools for an NBA wing. His body is a bit hunched and he's very thin at this stage, but Bass has wide shoulders, long arms and a solid base.

Aside from his physical tools, Bass has a versatile offensive skill set for a player his size. Although he's a bit turnover prone, he's very comfortable handling the ball, distributing in the half court and transition, and he's a capable spot up shooter despite his low release and slight forward lean. The do-it-all forward from Detroit can play with or without the ball, as he does a nice job moving off the ball and crashing the offensive glass when he's not involved in the play.

Bass is more fluid than he is explosive, as he struggles finishing around the rim in traffic at times (also a product of his thin frame), but his ball handling and passing ability are very advanced for his age. Detroit uses him as a point-forward type, which wasn't on display in full effect at Nike Academy, but you could see the potential as a playmaker.

Bass also has a lot of potential on the defensive end as he moves well and has the length to make plays on and off the ball. Bass turned in an impressive freshman season at Detroit  per 40 pace adjusted numbers: 18.4 points, 8.4 rebounds, 2.8 assists, 1.6 steals, 1.6 blocks, 2.5 offensive rebounds, and a 20.4 PER on 48% from two and 36.8% from three  and is slowly but surely working his way onto the NBA radar. Bass needs to improve his strength and as a shooter and decision maker, but he's without question an NBA prospect with strong potential after a couple more years of seasoning at Detroit.
Read full article