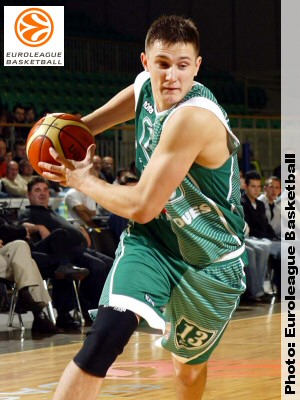 Carlo Sandrinelli
@DraftExpress
As we mentioned in our recap of the first half of the Regular Season, Jankunas had extra duties due to the injury sustained by starting center Tanoka Beard, which left Zalgiris frontline depleted. Having more space around the basket, Jankunas united with fellow Lithuanian Darjus Lavrinovic to become a dynamic homegrown duo that was very hard for opposing teams to stop. Their passing on offense and tacit understanding of each other on defense allowed the pair to be very effective down low.

However with Beard back days before the New Year and striving for the leadership role again, Jankunas had to resort back to coming of the bench as the 6th man, but with just as much importance for his team. Pauliuss minutes went down from 29.4 to 21.5 with Beard in the lineup, but his production didnt decline relative to his playing time. Averaging 13.3 points and 7.1 rebounds in the first seven games, the 21 year old power forward settled for 10.1 and 6.6 respectively after that. What didnt lessen on the court despite the smaller minutes was Jankunass attitude and hard work on both ends. Setting screens and fighting for offensive rebounds, Paulius also at times found himself scoring points in stretches when it was needed the most, though it was obvious that he received fewer touches than in the first half of the season. Defensively Jankunas is capable of staying with his man and doesnt suffer from the lack of an inch or two playing in the Euroleague.

A successful and solid season at the highest level of play in Europe might improve Jankunas chances of hearing his name called at the end of the second round, but the same reasons (lacking a few inches combined with being fairly limited athletically) we mentioned in the first recap of the season can be an obstacle that is hard to bypass for him if he considers the NBA strongly. At this time it doesnt seem like the NBA is his early goal, but the track of having a great European career looks promising for Jankunas.
Read full article

Carlo Sandrinelli
@DraftExpress
Jankunas had a busy summer winning the U-21 World Championship in Argentina and then playing a significant role with the mens national team in the Eurobasket. So it should come as no surprise that this talented power forward is already starting his 3rd season in the Euroleague, his most successful one to date.

Being no rookie at this level, Jankunas was expected to become a more important part of Zalgiris this season. He surpassed all expectations very quickly. Tanoka Beard, the main pivot of Zalgiris frontcourt, got injured at the start of the Euroleague season, so it was Jankunas and Darjus Lavrinovic who had to hold down the fort by themselves underneath the basket. But even with Beard back, Jankunas role hasnt diminished as he has proved to be a player who can be trusted even in the most decisive situations.

Carrying not only the great shape from the national teams this past summer, but some nagging little injuries as well, Jankunas confirmed that at 21 hes already a proven player for this level. Hes a lefty that uses his body perfectly in the low post to find opportunities to score even versus taller opponents. Not being athletic enough doesnt stop Jankunas in the Euroleague as he uses his head in every situation and is hardly called a youngster by anyone. Hes young just looking at his birthdate, while on the court he shows veteran skills and maturity. His work ethic is one of the main reasons for this. The newest product of it is extending his range as now Jankunas (even if his midrange release is quite slow) is terrorizing even from beyond the arc, which combined with his decent slashing skills make him hard to contain. On defense, Jankunas doesnt lose a step playing in the Euroleague. For example Tiago Splitter couldnt do anything vs. Jankunas, despite being 4 inches shorter.

Unfortunately, lacking a few inches combined with being fairly limited athletically makes Jankunas not very interesting for NBA scouts. With such a season in the making Paulius might hear his name called at the end of the 2nd round, but his future seems to be set as a Euroleague star.
Read full article

Strengths
Paulius Jankunas is quite a solid power forward who at his young age is already starting on a regular basis for a fairly strong team in Europe in Zalgiris Kaunas. This left-handed player is a pretty mobile guy, with some athleticism, rather strong considering his age and the fact that he's European, a fighting attitude and a nice set of skills.

Jankunas can look for his points in the low post. He enjoys nice footwork, being smart using his body, and even his elbows, combined with spin moves performed with accurate footspeed to take advantage of his rival. He likes to look for a left-handed semi-hook shot to finish his actions there, although he can use his right hand too. Even if in Zalgiris he has little chances to use his post-up game, it can be a go-to skill for him, as he showed playing in Lithuanian second division.

If he's not working in the post, the jumper is his biggest scoring threat. He's pretty solid from mid-range distances, but is also able to fire with range up until the international three-point line. He's not a shooter, being that his jumper is basically static, and his mechanics a little strange (placing the guiding hand with a very open angle from the hand that releases the ball), but he's usually effective.

He can also put the ball on the floor if needed, preferably with his left hand, although it's not the most common thing to see him do. He's also a decent passer from both the low or high posts.

Jankunas is a player whose visual impact tends to fool the viewer. He usually looks worse than he really is in certain areas of the game. It happens with his strength, athleticism, but also with his defense. The guy doesn't seem to have the best tools, but he usually gets the job done. He's smart in positioning and doesn't fear contact at all, indeed displaying fight whenever necessary. These characteristics, as well as a great instinct (particularly in the offensive end), make him a pretty good rebounder as well.

All in all, he's a player that makes few mistakes and who shows a great attitude; one of those guys whose game style and reactions on the court seem to belong to an older player.

Weaknesses
Jankunas' flaws can be summarized in just one word: potential.

Yes, he's a solid player, with his brains being in the right place, a great attitude and some serious skills. But at 6-8, he's undersized to play PF in the NBA (and he's no SF by any means), while his athleticism just doesn't make up for it. He's not particularly quick and neither is his vertical leap anything to write home about. At this point of his career, his limitations NBA-wise are painfully obvious every minute you see him on court.

Besides, he's not incredibly skilled to compensate for that. Particularly, he barely shows any skills playing off the dribble: rarely any shot or slashing moves to take advantage of his mobility, although it's true that he has little freedom in Zalgiris, currently being the fifth offensive option of his team every time he's on the court.

On defense, he currently survives because of his intelligence and solid fundamentals. But against quicker and more athletic forwards, he would likely suffer significantly more. His lateral quickness is just average, and he's not an intimidating factor inside the paint.

Finally, he still needs to bulk up a little even if he's rather strong for his age. It will help him to easier display his post-up game against higher level competition such as the Euroleague.

Competition
One of the most remarkable highlights in Jankunas' young career is the way he led the second team of Zalgiris (a squad full of youngsters who had clinched the eight berth in the playoffs in the regular season) to win the Lithuanian second division in the 2002/03 season, being the absolute go-to guy while earning MVP honors. He averaged then 21.6 points, 12.9 rebounds, 1.6 assists, 1.2 steals and 1.5 blocks per game, getting huge performances in the finals and going undefeated in the playoffs.

In the 2003/04 season, he joined Zalgiris' first team and took his first steps in the Lithuanian first division (where he averaged 8.9 points, 5.1 rebounds and 1 assist) and in the Euroleague (having 4.6 points and 2.8 rebounds per game).

In the recently completed 2004/05 season, he has steadily increased his contribution for Zalgiris. In the Lithuanian league he averaged 10.5 points and 5.5 rebounds, while in the Euroleague he had 6.2 points and 4.2 rebounds in almost 19 minutes of action per game. He also played in the Baltic League this season, averaging 11.3 points and 5.7 rebounds. It's interesting to note that both the Lithuanian and Baltic leagues are weak competitions (both won by Zalgiris), absolutely no comparison with the Euroleague, where Zalgiris couldn't go past the top-16 stage.

Jankunas has also played with the youth squads of the Lithuanian National Team. His first big event was the European Junior Championships of 2002, where he contributed to his team's fourth place with 11.8 points, 8.3 rebounds, 1 assist and 1.1 steal per game. The following summer, Lithuania advanced to the final of the World Junior Championships, just to lose against Bogut's Australia. Paulius contribution grew to 12.3 points, 9.3 rebounds and 1.3 assists per game. In the summer of 2004, he took part in the U-20 European Championships, averaging 12.5 points, 12.1 rebounds (leader of the tournament) and 1.1 steals, this time to help Lithuania to achieve the bronze medal.

Outlook
Jankunas has declared for the 2005 draft, probably to get some exposure. He will likely pull out considering there's no way that he can get himself into the first round, and even the second seems close to an impossible goal right now (some Lithuania media is reporting that he has already pulled out).

Next year he might have a shot at the second round, providing he manages to increase his importance in Zalgiris while developing his game.

Comments
Jankunas is the type of player that you can see easily becoming a valuable piece in Europe, but whose game seems difficult to translate to a league as dependant on the physical and athletic gifts as the NBA.