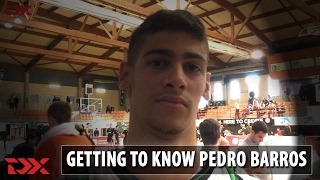 Strengths
-Excellent size for a two guard at 6' 6 with a solid 195-pound frame.
-Fluid athlete. Not overly explosive but can play above the rim in space.
-Competitive on both ends of the floor. Will scrap for loose balls or chase down rebounds. Gets deep in a stance defensively. Digs in and doesn't mind physicality. Active off the ball  2.8 steals per 40.
-Can really pass, especially in transition. Averaged 5.6 assists per 40 minutes (2.3 turnovers) playing both on and off the ball. Loves to grab and go in transition, moving it ahead to teammates or going coast to coast before kicking to shooters. Comfortable playing out of ball screens. Can hit the big over the top thanks to his size. Strong feel for the game overall.
-Active cutter. Finds gaps in the defense off the ball.
-Capable slasher attacking closets or out of pick and roll. Solid stride length. Comfortable ball handler who makes an effort to change speeds and directions.
-Shooting stroke is his biggest weakness, but it's not broken. Gets good rise on mid-range pull ups. Long release but has some touch. Not dead in the water there.
-Very well spoken. Good teammate. High intangibles.

Weaknesses
-Average length. Good not great frame.
-Fluid, not overly explosive. Not going to create high percentage shots for himself versus long, athletic wings. Average finisher versus length.
-Limited shooter at this stage  2-for-11 from three, 5-for-12 from the line. Long release on his jumper. Takes him too long to get into it. Sprays it left and right. Main area of improvement for him. Lack of a perimeter jumper limits his scoring potential in the half court.
-Much better playmaker in transition than the half court. Struggles when teams shrink the floor.
-Good in a handful of areas but what's his elite skill? Not quite special enough physically to not have many

Outlook
Since moving to Spain from Brazil, Nunes has developed his skill set considerably and turned himself into arguably the best prospect on the ANGT-L'Hospitalet Badalona squad. He needs to make considerable strides as a shooter to be considered a legitimate NBA prospect, but at 16 years old Nunes' competitiveness and passing ability are a nice start. Whether it's in the ACB or elsewhere, Nunes is worth tracking as a versatile guard who plays with toughness.

At only 15 years old, Brazilian guard Pedro Barros Nunes was one of the most impressive young prospects in Mexico City. At 6'7, 192 bounds Nunes has advanced size and mobility for a kid his age, and has guard skills to compliment it. He spent a fair amount of the camp playing the point guard position, and while he has the ball handling ability and vision to do it, he projects more as a shooting guard or wing down the line. Nunes has a versatile skill set and looked comfortable playing in the pick and roll, but also can operate off the ball. He is not the most athletic player, but he is strong and quick, and has the handle to get by defenders in one on one situations. He has a good looking balanced stroke that keeps defenses honest on the catch and shoot, however he did not look as comfortable in dribble jumper scenarios. Nunes' versatility was apparent on the defensive end of the floor as well, guarding multiple positions, rebounding the ball, and getting on the floor for loose balls. He looked competitive and seemed to be the leader of his team, impressive for only being 15 years old. Nunes is already a part of the Joventut Badalona junior program in Spain where he will get a chance to develop against some high level competition outside of his home country of Brazil.
Read full article