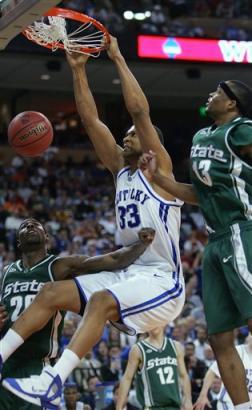 Joey Whelan
@DraftExpress
Randolph Morris put up very solid numbers in the Wildcats loss to Kansas, but did the majority of his scoring at the foul line. The junior had quite a tough assignment down low offensively dealing with the Jayhawks front court of Sasha Kaun and Julian Wright. Despite this, Morris still had a few nice moves down low and hit a couple of short jumpers. His physical play and strong moves towards the basket picked up multiple fouls on his defenders. Morris had a great day at the line, going 14-16 despite being only a 66.7% shooter on the season.

Defensively Morris didnt play poorly, but he didnt play well either. He fought hard on the glass, and finished right around his average with 8 rebounds. The Jayhawks only managed 7 offensive rebounds, thanks in large part to Morris blocking out very well against his opponents. Kansas did however shoot a great percentage in the paint. Morris needed to get out and contest more shots with his large frame and long reach.

A game like this wont have much of an effect on Morriss stock, although lets remember that he is a free agent and not a draft prospect after having gone undrafted back in 2005. He played aggressively and worked hard on the interior. Its certainly a positive to see Morris drawing so many fouls and going strong to the basket, however it was hard to gauge his offensive post play since he was making so many trips to the line. Morris has an NBA body, and has shown real improvement towards the end of this season. With a strong showing in his senior year, Morris could be a very interesting target in free agency as a backup center.
Read full article

Landry Fields
@DraftExpress
Morris' situation is unique in college basketball. In utilizing a loophole in NCAA regulations, Morris has simultaneously crushed his draft hopes and opened a new -- and potentially much more lucrative -- avenue as an NBA free agent. Kentucky's emerging center foolishly listened to the wrong elements last summer and declared for the draft. After going undrafted, Morris petitioned for and eventually received a reprieve from the NCAA. After an initial penalty of a lost season of eligibility, Morris was given leniency and returned after sitting out the Wildcats' non-conference slate (13 games). The caveat is that because of the loophole, Morris is effectively eligible for NBA free agency at any point, meaning he can sign with the highest bidder.

Upon his return, the Georgia native indicated he was going to stick around; having felt his second chance was too kind an opportunity to burn his coach and teammates for. As recently as Friday, Morris indicated that he was enjoying the college experience, despite Kentucky's struggles this season.

After a slow start, a leaner, more focused Morris has shown NBA-caliber offensive ability against the SEC. He still finds himself on the blunt end of many foul calls, limiting his minutes and exposure. When he's in the game, Morris is smooth and strong on the offensive end. He is, unfortunately, at the mercy of getting passes from his sometimes flaky teammates, but when he gets the ball in the post, he can be lethal. Morris is the centerpiece of any Kentucky success, as he is the Wildcats' only low-post threat. Staying out of foul trouble will be absolutely imperative if Kentucky wants to advance in the NCAA tournament.

If Morris has a big tournament (20-10 type numbers), he could hear his name bandied about again since NBA teams are eternally looking for offensively gifted big men. But he has expressed -- and most observers would agree -- that he has much to work on. Defensively, Morris is not yet strong enough or consistent enough to stay on the floor, much less dominate. And his rebounding for a big man is spotty at best. Morris' gifts are a deft shooting touch from mid-range, good footwork and fluid athleticism for a player his size. If he can address his weaknesses, he can be an NBA starter in the frontcourt. A blowout tournament could change the timing of his going pro, and mean everything to a Kentucky team looking for an identity.
Read full article

Strengths
Morris is a big kid, a bit lumbering, but has quick feet and good instincts. Even though he's not a legit seven feet, he looks comfortable in his body and possesses great natural awareness of where to be in proximity to the basket. This comes in most handy when catching the post feed and setting up for what has become a signature move -- the turn-around 10-15 foot jumper.

The big Georgian has enormous hands and uses them well, handling tough passes from either wing effectively. If Morris catches the ball near the basket, he will dunk it. A few feet away and he has more trouble.

As a full-court player, he is above-average athletically for his size, but is nowhere near the leaper former AAU teammate Dwight Howard is. Morris is more agile than he is athletic, using good timing in lieu of overwhelming jumping ability.

His frame is certainly NBA caliber, and once he starts working out full-time in an NBA weight room he should be one of the bigger and stronger players on the floor at any given time.

As intelligent a young man as he is off the court, Morris' freshman year at UK showed that he can utilize this prowess on the court, too. He plays the angles well, using space provided him when he needs to rather than always bulling his way to the hoop.

Probably the most intriguing number in Morris' stat-line this year are his 143 free throw attempts in only 672 minutes. Compared with other centers around the country, that is an extremely impressive ratio. He accomplished that despite the fact that Kentucky's offense was in no way built around feeding him the ball.

Simply seeing more of Morris on the court, rather than sitting on the bench in foul trouble, would no doubt extend his list of positives. He showed some sparks of being able to do more at times, especially in terms of his post moves and footwork, but nothing consistent.

Weaknesses
As noted, Morris is relatively quick afoot for a player his size, but is not a dynamic jumper. He makes up for it by gaining good position. Too often, however, the position was wasted when Morris wasn't aggressive enough in pursuing the ball. He got better towards the end of his frosh campaign, but needs to show more fire in his belly about rebounding.

Morris is big for college, but will not find NBA centers so easily moved off the block. Morris needs to improve on his footwork, anticipating his next move rather than planting and waiting for the ball to reach him.

While he has shown good, if raw, low post moves, Morris is more comfortable facing and shooting than using an effective drop-step. He'll dunk if he is alone and unguarded near the basket, but can be forced out of the lane if he's planted a few feet from the goal. Has not shown the ability to consistently create space between himself and his defender, but has shown the ability to hit the jumper over his defender when the space isn't there and create his own shot. Whether that shot goes in consistently remains to be seen.

Morris' shot blocking instincts are decent, but he's no jumping jack. He could use his college coach's instruction on attention to defense and positioning for another year since he can't make up for his mistakes athletically the way a Howard or a Stromile Swift might.

Competition
Morris looked his best in big games at the end of year, notching 20 points in the season finale, a thrilling double-OT loss to Michigan State (matching up with Paul Davis).

Morris' best offensive games were showcases for his mid-range jumper and raw power, while his worst outputs showed his immaturity and his penchant for foul trouble. Morris held his own against Lawrence Roberts and Mississippi State (17 points), but looked outmatched against quicker centers like Brandon Bass (4 points, fouled out).

It's worth noting that Morris showed improvement as the year progressed, the flameout against Utah notwithstanding.

Outlook
Morris shocked more than a few Kentucky fans with a late announcement about his NBA draft intentions, but as a big kid with skill, it's not surprising he's thinking about going pro for real.

There's little doubt Morris isn't ready for the daily grind of being a professional basketball player, but in a day and age of drafting potential over performance, Morris fits the bill to a tee.

Morris would still be better served by sticking around another year or two and learning better defense, improved aggressiveness on the glass and honing his offensive game. He'll get more touches as a sophomore and should improve on what are fairly paltry numbers for a big time prospect.

But Morris has the goods, whether he can parlay them into consistently dominant play remains to be seen.

Comments
Morris is a lot like some other high school and college freshmen centers in that his skills are not yet defined. It's hard to imagine Morris stepping on the court right now against even a passable NBA center like Aaron Williams or Adonal Foyle and having much of an impact. Obviously, given hours, days and weeks to hone his game, he'd certainly improve tremendously. However, given that he's not the athlete Howard is or the playmaker Josh Smith is, he's little more than a project at this point.

That said, he's a fantastic prospect, given the natural maturing process. Defensively, Morris still needs major improvement to be a regular NBA player, and it says here that another year of instruction from a top-flight college coach like Tubby Smith at Kentucky would make a borderline first-round Morris this year into a monster in a year or two. It certainly worked for Andrew Bogut.

Morris would benefit from a second year at Kentucky, getting good college press as one of the nation's best centers, and working on polishing his offensive game. Languishing at the end of an NBA bench seems like a waste for a kid with skill but not consistency. After all, its not like you can read Les Miserables sitting there while the rest of the team battles the Lakers.

But strong play from similar players like Al Jefferson with the Celtics makes guys like Morris feel they are ready, despite evidence to the contrary.

Facts
Was named a Parade and McDonald's All-American after his senior year.

While his game is all power, he is soft-spoken off the court and is a very good student. A member of the Beta club in high school, Morris is prone to reading Dostoevsky and Victor Hugo novels in in his spare time.

According to ESPN Insider's Chad Ford, sources in Kentucky have indicated that he is a legit 6-11 in shoes. He was listed all year at 6-10 by the Wildcats. That inch makes a pretty big difference considering that he is projected as a center in the NBA.
Read full article