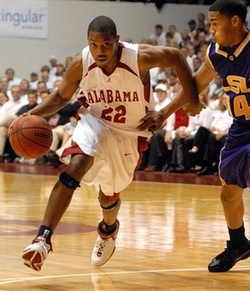 Mike Schmidt
@DraftExpress
After a strong sophomore campaign in which he proved to be a clutch leader, Steele opted to return to Alabama for his junior season rather than claim a likely spot in the first round of the 2006 NBA draft. He has struggled to get into any kind of flow this season, and appears to be clearly bothered by ankle and knee injuries he suffered early in the season. Despite clearly looking like a shadow of his former self, he managed to again step it up with clutch plays for a big home win against Georgia on Saturday, where Alabama had to dig itself out of an early 18-2 hole right off the bat and was behind for almost the entire game.

Steele struggled to find his shot early, settling for far too many jumpers and displaying uncharacteristically bad shot-selection. He clearly lacks the explosiveness he possessed last season, and he never was going to blow you away with his quickness to begin with. This has negatively affected Alabamas entire rhythm, as theyve counted on him to be their sole offensive catalyst ever since Chuck Davis went down with a season ending ACL tear mid-way through last season. He still did a good job of controlling the tempo the best he could against the Dawgs, and created some nice looks for his teammates, even if his team never really got into any kind of real offensive flow.

Late in the game, Steele displayed the clutch ability he has been noted for throughout his college career. He hit 3 shots in the final couple minutes of the game, and made an off-balance buzzer-beater from 15 feet to give 8th ranked Alabama their 15th win of the season. The ability to lead a team has been one of the positives for Steele throughout his college career, and he proved that his leadership qualities were still there despite his struggles this year.

Steeles jump shot looks worse than it was last year at this point, and this can probably be attributed to his injury. He barely elevates off the floor, but is regardless relying on his jumper as a main scoring tool for the time being, despite not being able to create any separation from his defender. He is hitting over 44% of his three point attempts regardless, though, so the Georgia game could probably be considered just an off game as far as his 3-point stroke goes. Off the dribble, he struggles to get by anybody, and has to pass the ball off early in the offense on many occasions. This hurts his ability to create in the halfcourt, and score inside. Steele also lacks the energy he played with the past two seasons, and often struggles to stick with his man on defense.

Though he has clearly struggled this season, Steele still does a good job of involving everyone the best he can on the offensive end. He sees the court very well, and is actually averaging comparable assist numbers to last season. His assist to turnover ratio is almost at 2 to 1 on the season. Much like a savvy veteran NBA point guard would, Steele is using his head to get the job done effectively for his team, rather than his legs. Its not quite clear if this is exactly what NBA teams are looking for in terms of drafting a point guard in the 1st round, though.

Steeles numbers are still comparable to where they were last season, but the way he is playing has taken a step back when it comes to the NBA. It is clear that the injuries have taken a toll on him this season, but at this point he would have been better off declaring last season. If he can get his legs back for the conference season, and lead Alabama in the NCAA tournament, it could do wonders for raising his draft stock back to where it was. If not, look for Ron Steele to return for his senior campaign. Much will depend on the severity of his injury and the potential long-lasting effects he might be causing by playing over 32 minutes a game on it. If he can eventually be expected to return to his old self, he will surely be evaluated in a different light by NBA teams with strong scouting departments.
Read full article

Jonathan Watters
@DraftExpress
After leading Alabama to victory in the first round against Marquette, Ron Steele had a good game against UCLA, but came short of advancing to the Sweet 16. Unlike in the opening round, Steele didnt get as many assists against UCLA, but he did score efficiently and attacked the paint enough to get 10 free throw attempts for the game. A few times late in the game, Steele committed to his decision too soon, which lead to a couple of turnovers when he didnt have anywhere to go with the ball. He made a few clutch shots down the stretch, including three free throws after being fouled in the act of shooting, but in the end it wasnt enough. Steele did show off his awesome handle, and his ability to kick the ball out from the lane.

Despite the loss in the second round, Ron Steele proved on the national stage that he should be mentioned when talking about the best point guards in the nation. He is showing much better scoring ability than he did his freshman season, and has rock solid point guard skills as well. Over the past month of the season, Steele proved that he can lead a team and be productive in the clutch while vastly elevating his draft stock. Though it is doubtful that he declares this season, watch out for Ron Steele next season when he has a chance to be the man on Alabama next to some more polished players and solidify himself as one of the best point guard prospects in the country.
Read full article

Joseph Treutlein
@DraftExpress
For the second year in a row, Steele had a good game in the NCAA tournament, and this time it led to a victory for the Crimson Tide. Before the tournament, we said that Steele must score efficiently and run his team effectively if they were going to win some games. Thats exactly what he did, taking only 9 attempts from the field to get his points, and making 4 of 6 three point attempts while getting to the line 11 times. During the times when Marquette would claw there way back into the game, Steele was right there hitting key three point shots to extend the lead on key possessions. He played very unselfishly, looking first into the post, and then looking for his own shot once other options were exhausted. Steele is quietly becoming a big time player who can handle the ball like a wizard, score from outside, near the hoop, and from mid-range, and his playmaking skills remain very impressive. With another performance or two like this, Ron Steele might start to get some of the attention nationally that he deserves.
Read full article

Landry Fields
@DraftExpress
Playing on a team lacking depth and scoring options, Ron Steele has done a terrific job carrying his team down the stretch, displaying more promise as a scorer and still doing a solid job running his team. In the NCAA tournament, Steele will need to show that he can carry his team despite his youth to best improve his draft stock. He is shooting better this year, and still showing masterful ball-handling skills and court vision. If he can score from the field efficiently, and run Alabamas offense with poise, Steele could solidify his spot in the first round in the future.
Read full article

Jonathan Givony
@DraftExpress
A quiet, role-playing type PG that really knows how to run an offense, but will never be flashy enough to attract too much attention to himself. Steele plays steady, smart, and under control, first looking to create for his teammates and only taking shots that come to him within the context of the offense, therefore shooting a very high percentage and possessing an excellent assist to turnover ratio as a freshman. He is not blindingly explosive or really a prolific scorer, but he gets the job done and has some room to grow as a player thanks to a seemingly good attitude. The stage is set for him to have a huge coming out party as a sophomore at the national level, but Alabamas alarming lack of depth at the guard positions might put a little more pressure on him to score than this unselfish playmaker might be used to. The Crimson Tide will need him to transform his game from one of a steady role player to a go-to scorer on the perimeter. How he deals with that will be anyones guess.
Read full article