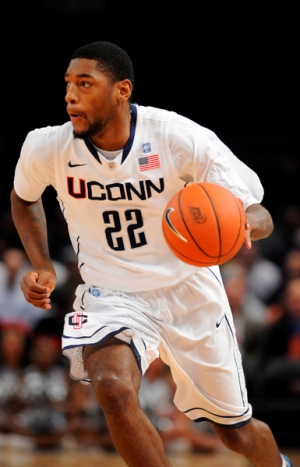 Mike Schmitz
@Mike_Schmitz
Roscoe Smith, 14 points, 3 rebounds, 1 turnover, 6-for-8 FGs, 0-for-1 3FGs
Known mostly for his athleticism and energy, Smith had an impact in the scoring department on Thursday as he knocked down at least three mid-range jumpers (one of the And 1 variety) and showed an ability to finish around the rim with a nice reverse layup in traffic. Despite grabbing only three rebounds, Smith worked tirelessly to keep plays alive on the offensive glass and battled on the defensive glass despite his 6-7 stature and thin framenot a surprise considering he was one of the best rebounders in college basketball this season.

Smith is most certainly an undersized four because of his lack of perimeter skills and deep shooting range. His face-up four style of play on offense puts him a bit behind the eight-ball on defense, where he struggled defending the post with consistency because of his size. All in all, Smith is an energy guy who has a nose for the ball and makes a conscious effort to talk on defense and rebound the basketball. He's not going to be much of an offensive threat at the professional level, but showing an ability to make a face-up jumper with some consistency certainly helped his stock.
Read full article

Despite struggling with his consistency offensively, Roscoe Smith found a starting spot and consistent minutes as a freshman during Connecticut's championship run, primarily due to his versatility on the defensive end. Standing at 6'8 with long arms, Smith had the length and quickness to effectively defend multiple positions for Jim Calhoun, and was often times tasked with defending the oppositions best offensive player.

Smith moves his feet well laterally, which when combined with his length and high effort level made him an effective defender off the bounce. He would be underdeveloped physically and would need to become stronger to defend the post at the next level, but he used his length to disturb post players when seeing minutes at the power forward spot for the Huskies.

He still tends to bite on pump fakes, and struggles at times fighting through pick and rolls, but both should be correctable with his physical tools and effort level.

On the offensive side of the ball, Smith struggled to find a comfort level. Taking a back seat to the dynamic scoring combination of Kemba Walker and Jeremy Lamb, Smith's primary role in the half-court offense came as a spot-up shooter, which isn't his forte. Smith struggled with consistency -- both in results and his form, as he often times appeared off balance on his jump shot attempts -- a problem made worse by questionable shot selection, as he settled for some contested jump shots early in the shot clock. According to Synergy Sports Technology, the 0.667 points per shot Smith scored on jump shots, and 0.755 points per shot he scored on catch and shoot jumpers, both ranked in the bottom 25% in college basketball.

To this point, Smith has not shown the ability to create much off the dribble, although he does have some physical tools that suggest he could down the line. He has a quick first step and takes long strides, and once he gets in the lane has good elevation and solid touch. At this point, his lack of a refined handle and ability to change direction are holding this part of his game back.

Most of the remainder of Smith's offense comes from getting out in transition, offensive rebounds, and cuts, where his athleticism and touch around the rim shine, and his lack of ball handling becomes less of a detriment.

With Andre Drummond joining Alex Oriakhi in UConn's front court, Smith is likely to be pushed further out to the perimeter for the bulk of his minutes. This may be good for his development as a prospect, as this is the role he's likely to see if he gets to the next level, but it's going to become even more paramount for Smith to further develop as a consistent set shooter and as a ball handler, particularly with highly touted recruit DeAndre Daniels joining Jeremy Lamb in a suddenly crowded UConn backcourt.

Smith's oustanding effort level and defensive versatility should continue to earn him minutes with Jim Calhoun. However, with the loss of Kemba Walker, the UConn offense is going to need somebody beyond Jeremy Lamb to step up and take on a bigger role. In order for Roscoe Smith to be that player, he's going to have to make significant strides in his skill-level on the perimeter.
Read full article

Smith has a very narrow frame, but brings tremendous energy and solid athleticism to the table, being the type of player who fills up the stat-sheet with blocks, steals and offensive rebounds, while picking up plenty of baskets in transition in the process. He has excellent lateral quickness, allowing him to switch onto perimeter players with ease guarding the pick and roll, while also attacking the passing lanes and getting his hands on pretty much everything in his area. Clearly hes the type of player who has a nose for the ball.

Offensively, Smith likes to play primarily facing the basket, where he can attack his matchup with a very quick first step from the perimeter, getting to the rim with some very long strides, often to finish with a dunk. He fancies himself as being more of a small forward than a power forward at this point, and shows some questionable shot-selection forcing things somewhat from the perimeter, mainly in the form of hurried shots off the dribble. He does have decent form on his jumper, though, and should be able to develop his range in time.

Smith needs to continue to improve his ball-handling skills as well, as he at times looks a bit out of control with his dribble. His lack of strength also makes it difficult for him to finish around the basket on occasion. At times youll see Smith post up his man on the block somewhat , mostly to shoot turnaround jumpers or turn and get by his man thanks to his quickness.

On the other end of the floor, while Smith clearly fills up the stat-sheet, he often does it at the expense of his teams defense, as he tends to bite on pump-fakes and gambles excessively in the passing lanes. His fundamentals on this end could clearly stand to improve. He plays with a frenetic energy, though, which clearly rubs off on his teammates, and was about as vocal as youll find in the games we saw him playpounding his chest after every big play. No one is going to need to tell him to play hard once he gets to college, which is definitely a big plus.

A couple of the recruiting analysts we spoke with pointed out some concerns about potential red flags surrounding Smiths character, which may not be that much of a concern considering his age, but could be something to look out for moving forward.
Read full article