Jonathan Givony
@DraftExpress
The Spanish shooting guard finished the camp with another solid outing, this time being more aggressive in terms of scoring points. Blanco is a naturally unselfish guy who usually prefers to feed a teammate, as he had been doing these days, but at some point he should try to take advantage of his strength and athleticism to finish himself, as he enjoys the tools to be effective here. In this last day he went all the way to the hole on three different occasions, particularly shining with a right-handed floater over an opponent using the glass and with a nice dunk where he showed some of his athleticism. Even if his first step is nothing much more than decent, his strength and long strides help him to get the job done, while he's usually under control in order to take decisions while slashing.

Saul has shown maturity and intelligence during the camp (actually he's studying Telecommunications Engineering, pretty impressive since it's one of the very most difficult degrees in Spain), very good decision making, an increasingly better shooting stroke, and very good defensive and rebounding activity. Although not extremely intriguing, he's a player with nice potential who understands the game and seems to enjoy the attitude and mental strength to keep improving for many years (indeed, we have seen him working on his own on his perimeter shot during the past summer). The fact that many NBA teams weve spoken to have admitted to not having done their homework scouting him in the ACB league probably hurts his stock in the draft, but still it wouldn't be that surprising if someone bet on him with a very late second round pick, even if it seems a bit unlikely.
Read full article

Jonathan Givony
@DraftExpress
After a fairly underwhelming performance in the camp so far, Saul Blanco came out and had an excellent showing in day three. He showed very nice quickness putting the ball on the floor and getting to the basket, attacking the basket aggressively and either finishing the play himself craftily or finding the open man on the perimeter. He had a number of very athletic rebounds, particularly on the offensive end, showing off his excellent toughness as well as his knack for being in the right place at the right time.

Its not hard to tell that Blanco is coming off an excellent season playing in the best league in Europe, as he looks like a consummate professional who knows how to play the game. He even left a good impression with the part of his game that is considered weaker than othershis perimeter shootinggoing 2/4 from behind the arc, even if his inconsistent release point and the quickness in which he gets his shot off still leaves something to be desired.

He may have also been a little too unselfish on some of his drives (something that plagued him even before in the previous day), getting to the rim nicely with his excellent first step, but preferring to dish off to the perimeter rather than use his solid leaping ability to finish strong at the hoop. All in all, though, this was a very strong showing from the Spanish shooting guard, one that made us ponder hard whether he might be a guy who is worth an NBA team investing a late 2nd round pick in, just to see how he continues to develop down the road. There are a few things to his game that remind you of a slightly taller Jose Calderon.
Read full article

Luis Fernández
@DraftExpress
Saúl Blanco, an emerging youngster in the Spanish front who has managed to establish himself in Alta Gestión Fuenlabradas rotation in the last couple of months. Blanco is an athletic 6-5 shooting guard born in 1985, already a useful player in a very strong league as the ACB, but who also enjoys nice long-term potential. 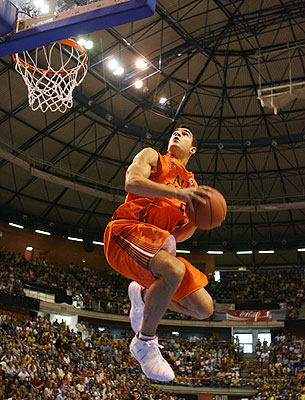 These are not spectacular numbers, and to be selected in the draft doesnt look a realistic option at this point. Saúl needs to become more of an offensive force, showing more aggressiveness while attacking the rim and improving his versatility and accuracy while shooting the ball. Still he would be a very interesting player to showcase in a setting like the Treviso EuroCamp, where he might be able to turn some heads.
Read full article