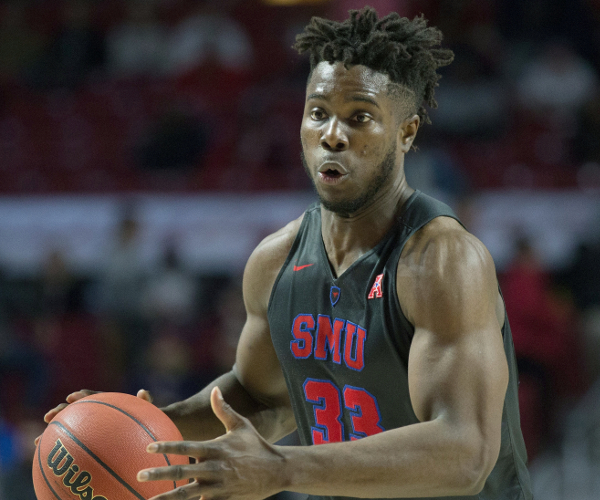 Julian Applebome
@jlapplebome
Semi Ojeleye of SMU posted an impressive 40.5 Max Vertical Leap (tied for fifth best), but perhaps the more significant numbers for him were the 10.58 seconds he posted in the lane agility testing and 3.16 seconds he posted in the three-quarter court sprint which rank third and eighth best overall respectively.  Ojeleye weighed in at strong 241 pounds yesterday which he has proved is not too high of a number to compromise his athletic ability.  He's a highly unique physical specimen, ranking in the 95th percentile or better in those three categories in our extensive database.
Read full article

Jonathan Givony
@DraftExpress
SMU is a dark-horse Final Four pick, and has more NBA prospects on their roster than anyone in the East region besides Duke. The Mustangs are a well-oiled machine on both ends of the floor, boasting impressive size in their backcourt, shooting at every position, and tremendous versatility defensively.

The key to their offense is Duke transfer Semi Ojeleye, a physically gifted power forward who can handle the ball in the open floor, make spot-up or off the dribble 3-pointers, create his own shot in the half-court, and get to the free throw line prolifically thanks to his unique combination of quickness, strength and aggressiveness. A matchup with USC face-up 4-man Bennie Boatwright (if they defeat Providence) would give NBA scouts an opportunity to get a better feel for his perimeter defense, which has been somewhat inconsistent in the weak AAC, where he isnt always required to operate at maximum intensity.

Ojeleye may be somewhat of a sleeper in this draft, as almost every team in the league is looking for a combo forward in his mold who can stretch the floor, create his own shot and hold his own defensively. Hes been flying below the radar due to the poor level of competition of the American conference this season, but has an opportunity to have a coming out party in the NCAA Tournament.
Read full article

Mike Schmitz
@Mike_Schmitz
After a season and a half as a rarely-used energy big man on loaded Duke teams  playing 143 total minutes and scoring 46 total points  6' 7 235-pound Semi Ojeleye has found a home in Dallas at SMU. The versatile forward, who had to sit out the 2015-16 season as a redshirt transfer, ranks third in the AAC in scoring at 18.2 points per game and has been a key cog in SMU's tremendous season, while working his way into NBA Draft conversations.

Ojeleye, whose parents hail from Nigeria (father a doctor, mother a nurse) has turned himself into a legitimate stretch option as a mismatch four. He's shooting 42% from three on a healthy 138 attempts (five per game), a product of his strong work ethic and focus, after shooting just one 3-pointer per game on average in his time at Duke. A well-spoken, intelligent 22-year-old, Ojeleye doesn't lack in confidence and has an extremely professional approach to the game, and his strong mentality has really showed through 27 games.

Used strictly at the four in SMU's offense, Ojeleye has time and space to get to his jumper off the catch, can shoot off the dribble if run off the line, is nimble enough to attack opposing fours off the bounce with a tough combination of power and quickness, and is dangerous operating in mid-post spots while flashing crisp footwork for a 235-pounder. Ojeleye is scoring 23.5 points per 40 minutes shooting 50% from two and 42% from three and has an NBA translatable skill set as a mismatch four who may be able to play a pinch of small forward for stretches. Here's a full breakdown of how Ojeleye is able to impact the game for the Mustangs:

Ojeleye has some weaknesses, however, as he's a bit undersized for a power forward even in today's NBA at 6' 7, and he doesn't make up for it with a freakish reach (6' 10 wingspan) although his jacked 235-pound frame definitely helps. He's somewhat caught between positions on the defensive end as he's not quite big enough to check traditional fours, and while demonstrating solid lateral quickness when fully engaged, doesn't have a ton of experience chasing around NBA-level wings. His instincts on that end have room to improve as well, evident by his very low block and steal rates (partially a product of SMU playing a fair amount of zone). Ojeleye can also add more value on the defensive glass  5.5 per 40 minutes , another area where he'll need to bump up his production to play long stretches at the four in the NBA.

Ojeleye's lack of elite size and average standstill leaping hurts him as an interior scorer at the NBA level, and his overall perimeter skill set could use some polish if he wants to play more minutes on the perimeter. Here's a full breakdown of the main areas where Ojeleye has room to improve:

All in all, despite some shortcomings, Ojeleye's mature approach, strength, agility and offensive versatility make him a very intriguing NBA Draft prospect as a small-ball four that can play some three in bigger lineups.

Strengths:
-Good size for a wing at 6-6 ½ in shoes with a 6-9 ½ wingspan
-Chiseled frame looks NBA ready already. 217 pounds
-Very good athlete
-Can make an open 3-pointer
-Finishes very well around the basket
-Rebounds extremely well for his position
-Rarely turns ball over
-Puts great effort in on defense
-Highly unselfish. Finds the open man
-Moves intelligently off the ball
-Sets solid screens
-Appears to be an excellent teammate
-Smart and physical
-Doesn't try to do things he isn't good at

Weaknesses:
-Needs to improve his skill-level offensively
-Average ball-handler. No left hand. Struggles to create high-percentage shots for himself in the half-court
-Strictly a catch and shoot jump-shooter. Not incredibly consistent yet from the perimeter

Outlook: Consummate role-player who will be an asset at the college level. May not project as a go-to scorer, but is a team player who does all the little things needed to win games. Has terrific size and strength for his position. Must continue to improve his skill-level, but looks like someone who will be more effective when surrounded by better players.