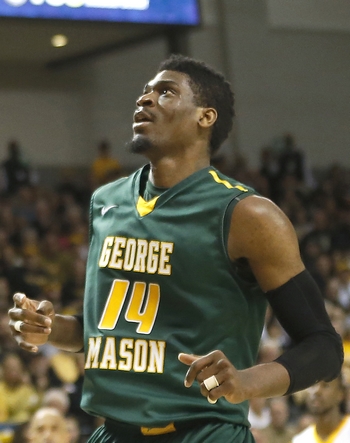 DraftExpress
@DraftExpress
-Jamaican big man Shevon Thompson, like Ibeh, struggled to finish inside at times this week (37% 2P%), but posted terrific measurements standing 6'11 in shoes with a 7'5 wingspan while tipping the scales at 241 pounds.
Read full article

Picking up the game of basketball at age 16 as a junior at Vere Tech HS (Jamaica), Shevon Thompson is one of the more unique prospects in this year's NCAA senior class. Ranking among the top rebounders at the Junior College level before making the jump to Division I, Thompson landed at George Mason last season. Earning All-Conference Third Team honors in the A10, averaging 12 points and 11.4 rebounds per game, Thompson, despite his inexperience, flashed a clear-cut NBA caliber skill with his rebounding ability, and figures to be a player NBA teams keep a close eye on as the year goes on.

Standing 6'11 with a 245-pound frame, Thompson has terrific size for a center at any level. Moving well for a near-7-footer, Thompson could stand to continue getting stronger, but has a nice combination of physical tools and athleticism.

Thompson's value proposition starts with his tremendous rebounding ability. Ranking among the top per-minute and per-game rebounders in all of college basketball, Thompson does an excellent job tracking the ball off the rim, showing the ability to rebound inside and outside of his area in the process.

Offensively, aside from his ability to rebound the ball, Thompson's skill level leaves a lot to be desired at the moment, even if he shows the occasional flash of ability. He doesn't have a strong feel for the game on the offensive end, but nonetheless sees most of his opportunities operating one-on-one in the post creating for himself, often magnifying how raw he is at this point. Appearing very mechanical and turning the ball over frequently, Thompson struggles at times as his lack of finesse and still developing physical strength limits him at times, even when he does create an opportunity for himself with his basic post repertoire.

Thompson appears far more comfortable in catch and finish situations, doing a nice job converting put backs and making himself available for dump passes in the half court and transition. Though his hands appear a bit shaky at times, his ability to finish above the rim resulted in his 77% shooting in transition and 60% shooting as a finisher in the half court. Lacking any perimeter game to speak of, and looking quite uncomfortable putting the ball on the floor at times, the left handed center make 63% of his free throws, and does appear to have some potential away from the paint, albeit in the distant future.

It isn't difficult to see that Thompson has only been playing basketball for a short time watching him operate on the offensive end. He is robotic at times, not always reading the game instinctively, which is reflected in the fact that he dished out only 6 assists over 911 minutes last season, an incredibly poor rate. It will be absolutely fascinating to see how his skill level develops in his senior season and beyond, as he's still clearly early in his learning curve.

Defensively, Thompson is a surprisingly inept shot blocker. Despite his size and athleticism, he averaged only 1.4 blocks per 40 minutes, seeming to lack the instincts to utilize his size as a rim protector, not attempting to contest shots in his area, and often getting in position to rebound the ball instead of helping over to the weak side. Looking uncomfortable and hunched over venturing away from the rim for much more than a soft show and recover, Thompson is a fairly capable interior defender where his physical tools allow him to how his own in one-on-one situations. He falls victim to stronger, craftier post scorers at times, but makes a positive impact and appears to have the quickness to be effective away from the rim too as he gains experience and receives better coaching down the road.

The challenge for NBA scouts in evaluating Thompson isn't what he brings to the table at this stage, but rather just how much more room he has to grow given how raw he is and his lack of high level experience. Players his size with athleticism who like to rebound the ball aren't easy to find, and if Thompson can follow in the footsteps of the late blooming center prospects that have gone before him and smooth over the rough edges of his game as a scorer and defender, he could emerge as a legitimate NBA prospect as a senior. Even if he doesn't make it to the NBA right away, he is someone teams will likely track closely as he moves on to the pro ranks.
Read full article