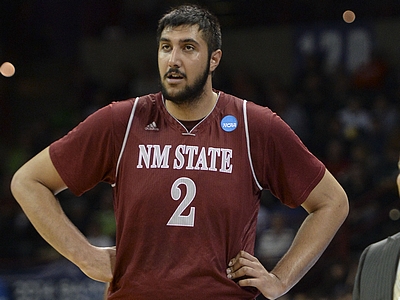 At 7'5, New Mexico State's Sim Bhullar was the tallest player in the NCAA this season along with UC Irvine's Mamadou Ndiaye. Bhullar helped New Mexico State win the WAC tournament before they bowed out in the NCAA Tournament Round of 64 to San Diego State. Turning 22 in December, Bhullar decided to forego his last two years of eligibility to enter the NBA draft. His height will make him a prospect teams won't simply gloss over, but he will need to prove he can provide consistent value in today's NBA to earn a roster spot. 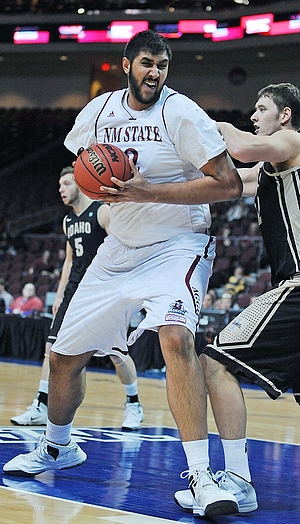 Bhullar would become the tallest current NBA player by two inches, ahead of Oklahoma City's Hasheem Thabeet (measured 7-2 1/2). He has a wide frame at 360 pounds (New Mexico State listing), huge hands, and a gigantic wingspan, but hasn't maximized his strength yet, as he's often pushed around inside by smaller players. Bhullar's conditioning-level is a work in progress, as he has a difficult time operating at the same intensity-level in his 26 minutes per game, tending to tire rather easily as you'd expect from a person his size. Bhullar has been able to remain healthy though, missing just six games in his collegiate career due to a foot injury , which is very important considering how much of a concern injuries can be for players his size.

Bhullar's biggest strength offensively is his excellent offensive rebounding prowess, pulling in 4.1 offensive boards per 40 minutes pace adjusted, one of the highest rates among players in our Top-100 prospect rankings. His incredibly long arms, soft hands and solid instincts for pursuing loose balls help him quite a bit here, and he is difficult to move away from the basket once he sets up shop inside, giving him a significant advantage. He was usually able to convert these putbacks rather easily, not bringing the ball down so that it could be stolen.

Bhullar is also an excellent target as a cutter or pick and roll finisher thanks to his length, reliable hands, and extremely soft touch, even if New Mexico State's lackluster spacing and guard play didn't always allow him to take advantage of this. He ranked as the #1 finisher in the country in non-post up situations this season among prospects in our Top-100, converting an outrageous 78% of his attempts according to Synergy Sports Technology. While he's not a very explosive athlete from a vertical standpoint, he's just so big and long that he barely needs to jump to finish plays emphatically around the basket.

Bhullar sees the biggest share of his offense in post-up situations (45% of his offensive possessions according to Synergy Sports Technology) where he scored with relatively mediocre efficiency (.78 points per possession) even against much-smaller WAC players. The second tallest WAC player was 6'9, so Bhullar had a considerable advantage on a regular basis, but hasn't figured out how to consistently take advantage of that at this stage of his career. When he was able to get deep position, he was able to turn and shoot over the smaller defenders without needing any advanced footwork. Bhullar only demonstrated an average drop stop and a quick turn to the middle to get off shots and had little ability to score if he didn't gain deep initial post-position.

When matched up against other seven footers in Gonzaga's Przemek Karnowski and Arizona's Kaleb Tarczewski, Bhullar struggled to gain position as he kept getting pushed off the block and was then unable to get a look at the rim over the length of the seven footers. When he is pushed off the block, he is unable to back his defender down or get around them to get to the rim. He won't have a major size advantage most nights in the NBA, so he will need a more developed post game to help him contribute offensively. 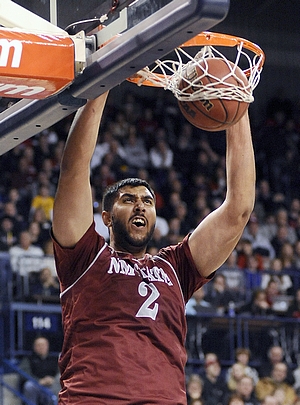 Defensively, Bhullar was able to sit in the paint, protect the rim and rebound very effectively at the collegiate level. Bhullar blocked five shots per 40 minutes pace adjusted , most among players in our Top-100 rankings. He has good instincts and solid footwork, to go along with a ridiculously long wingspan, and is a little more mobile than you'd expect considering his size.

With that said, NBA rules won't give him quite the same advantage he had in the college game, as the defensive three-second violation and 24-second shot clock significantly change the way big men in his mold can operate. Bhullar rarely stepped outside the paint at the college level and was a major liability when doing so, as he's extremely slow-footed and has a very difficult time reacting quick enough to contain penetration on pick and rolls, being somewhat lethargic in the way he approaches his work on this end of the floor.

Perimeter oriented big man were able to get countless open looks with Bhullar on the floor, as it simply didn't make sense for him to expend the energy to run out to the 3-point line and then try and recover. Conditioning was again a factor here late in games, as Bhullar's effectiveness drops off dramatically when he's winded.

NBA coaches will likely be skeptical about whether can defend at the pro level until he improves his quickness and conditioning-level, as many teams will attempt to move him away from the rim to neutralize his shot blocking ability.

Bhullar was only an average defensive rebounder despite his size, posting 7.5 rebounds per 40 minutes pace adjusted. This is because he is only able to rebound balls directly in his area and is not quick or vertical enough to fight for loose balls that bounce away from him. While he will continue to be able to be the first to get to rebounds that drop near him, his inability to track down rebounds outside his area will likely prevent him from becoming an elite rebounder until he improves his conditioning level.

Bhullar's height advantage makes him an intriguing prospect and a project a team might want to invest in during the second round, but his weaknesses are very glaring and could prevent him from becoming a NBA contributor until he figures out a way to address them. Teams will be able to exploit his weaknesses on defense by making him move outside the paint, and he does not have a polished post game to allow him to provide enough value on the offensive end to counter that. His height, length, hands and shot-blocking instincts will always be a valuable commodity, but he may need some time learning the pro game in Europe or in the D-League before he can provide value to a NBA team.
Read full article