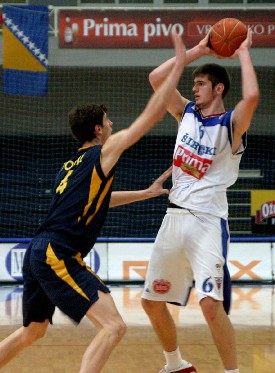 Jonathan Givony
@DraftExpress
Stanko Barac (#25 on rights held ranking) saw little to no playing time in the three Tau Vitoria games we got to take in at the Copa del Rey. His minutes are down from last year (12 per game in the ACB) and his FG% is very low at just 41%, as his jump-shot doesn't seem to be falling for him quite as well this season and he lacks the strength to operate effectively with his back to the basket. He is rebounding at a good rate, but his extremely high rate of fouls might make it difficult for him to stay on the floor even if he weren't stuck behind the likes of Tiago Splitter, Will McDonald, Mirza Teletovic and at times Pete Mickael when he moves to the PF position. He's playing slightly better in the Euroleague. Barac is likely a more skilled player than he's able to show at the moment, but considering his lack of athleticism and production in high-level Europe he'd have to show something special in summer league to earn a roster spot with the team that drafted him, the Indiana Pacers.
Read full article

Jonathan Givony
@DraftExpress
Not being very healthy, Barac could only play a couple of minutes that went completely unnoticed. It's a pity, because he had been delivering quite a consistent season, which actually comes as a bit of a surprise. Brought to Spain from the Balkans by Tau Vitoria, the Basque team always had the intention to loan him ever since signing him. The surprise came when Pamesa Valencia emerged as the final destination for the Croatian, as they are an upper-class team in the ACB League, not that far away from Tau itself.

Still, Barac soon worked his way into the teams rotation by delivering solid outings. Although quite limited in terms of athleticism and still in need of gaining strength (which will greatly help him to become a more dangerous player in the low post), Barac is really big and he's making a productive living off of his sweet touch from mid-range distances, while he shows nice understanding of the game. He's a guy to closely follow his development in the future.
Read full article

Kristian Hohnjec
@DraftExpress
Barac can be considered one of the biggest sleepers in this draft if he opts to stay in, given the great size and promising skill-set he possesses. He had quite an impressive season playing for Siroki in the Adriatic league, ranking 2nd and 3rd in rebounds and blocked shots per game respectively.

What made him a serious prospect is the growth spurt he hit in the last couple of years. Stanko was first noticed playing in the Reebok Eurocamp back in 2004, where he was overshadowed by the likes of Pavel Podkolzine and Martynas Andriuskevicius. While being praised for his shooting ability and fundamentals, Barac was considered too slow and weak for NBA competition. Since then he grew 4 inches and gained some weight, even if he is still a heavy footed Center who lacks some fluidity in his motions, it is a lot easier to deal with his lack of footspeed and vertical explosiveness at 7-foot-2.

Barac is still by no means an outstanding prospect, especially when considering the direction the NBA is heading these days, with the emphasis being on quickness and versatility, but he did a good job turning himself into a someone the majority of teams will consider in the 2nd round.

Despite being high one of the top players in the Adriatic League as far as his defensive stats go, Barac still has a lot of learn on that end of the floor, even if there are definitely some positives besides his sheer size. Barac shows solid toughness, not being shy about physical contact and taking pride in protecting the rim close to the basket. Sometimes he struggles making timely rotations and gives up deep position on the block too easily, while his perimeter defense is almost non-existent.

Teams often try to lure him away from the basket, which promptly puts him in foul trouble being due to his inability to stop dribble penetrations. Stanko will surely have to work on his foot-speed, but his presence around the basket often intimidates shooters and forces them to take low percentage shots.

Offensively, Barac doesnt have great polish and is a bit mechanical in his movements, but he can do a little bit of everything and put up points on the board. At this point his most consistent weapon is his perimeter jump-shot, but unlike some other European big men, Barac doesnt overdo it and spends most of the time in the paint, where his size is a great asset on offensive glass.

Back to his shooting capabilities, Barac is an above average static shooter with range out to the international three-point line. He doesnt have the fast release of a Zydrunas Ilgauskas, but his mechanics are solid enough to get his shot off when given some space. If the defender plays him closely, Barac can take the ball to the basket thanks to the surprisingly good ball-handling skills he possesses as well as the long strides he makes.

In the low post he is not most skilled guy, but he can finish around the basket with both hands and shows good accuracy shooting the hook shot with his right hand. Barac has above average passing ability for a player his size, recognizing cuts and openings in the defense well.

Barac will be participating in the Reebok Eurocamp, and that could go a long way in determining where his stock lies, with an impressive showing there it is not out of question that Barac could get some looks in the late 1st round, even if the 2nd round is probably his most likely destination should he decide to stay in. If he decides to withdraw his name from the draft, Barac would give himself another year to work his way into the first round, which he certainly seems capable of doing.
Read full article

Luis Fernández
@DraftExpress
Barac is a very skilled center with deceptive athleticism. At first sight he looks like a slow and heavy-footed player, but then you see him taking his man off the dribble from the three-point line with surprising quickness (nice first step, long strides), and you have to reconsider your opinion on him. He lacks some reactiveness, thats true, while hes not a very active guy and shows questionable stamina. But once in motion, hes capable of decent athletic efforts, always considering hes 7 feet, one inches tall. In terms of strength, Barac displays a nice frame to work with. Actually, hes not your typical skinny international big, just a nicely-built guy who still needs to get stronger.

Skill-wise, Stanko displays the abilities of the two biggest frontcourt positions. As mentioned, hes a surprising slasher who shows very nice ball-handling skills and is capable of attacking his opponent with both hands. However, its not the most common thing to see him do. When facing the basket from the perimeter, he usually settles for static jumpers. Hes quite an orthodox shooter with three-point range (he credits a respectable 38.7% from behind the arc). Besides, he also enjoys a nice post game, showing very interesting footwork in the paint and the valuable ability to finish with both hands, sometimes with a jump-hook. Still not a great defender, Barac gets eventually pushed around by stronger opponents, showing average lateral quickness and not always being active enough from the weak side. But hes already a decent intimidator who is willing to use his nice wingspan and decent timing to block some shots.

Were growing optimistic about his draft chances in the future (most likely, the 2008 draft). Hes big, hes skilled and he should become strong enough; considering the usual policy of NBA teams in the second round, its hard to find a reason why he should be left out. But theres more: if Barac manages to take his game to a higher level next season (and he likely has the potential to do so), the first round is not out of question.
Read full article

Kristian Hohnjec
@DraftExpress
Stanko Barac was first noticed at the Reebok Eurocamp in Treviso a couple of years ago, stringing together a very nice performance that was especially impressive in terms of his long range shooting. As a 6-foot-10 Center with slow feet, Barac was labeled at the time as strictly a Euroleague prospect, with the NBA probably being out of his reach.

He is still not and will never be first class talent, because his athleticism is really below average by NBA standards, but Barac's stock is definitely on the rise, and he could see his name called in the 2nd round of this or next year's draft.

Stanko is very big, a legit 7-foot-1 with a good wingspan and frame. He definitely plays stronger than he looks, showing the necessary toughness and grit under the rim. Barac is a dependable defender, using his big body to put opponents into uncomfortable situations. Despite not being able to get much lift off the ground, he blocks a good amount of shots thanks to his anticipation, positioning, and willingness to alter shots.

Offensively, Barac is a smart and skilled player, possessing a reliable jump-shot with range out to the international three-point line, as well as some effective, although unpolished post moves. He is a good passer out of double teams and shows an above average basketball IQ.

Although he doesn't ooze with potential like some others, Stanko is a hard working 7-footer who will most certainly find his niche on the basketball map. It's yet to be seen if he will be able to carve out a niche in the NBA, but we are most certainly talking about a desirable Center for Euroleague teams.
Read full article

Luis Fernández
@DraftExpress
One of the few surprises in the tournament, this fundamentally sound 7-1 center emerged as a very consistent low post presence. Playing only 13 minutes per game, he led Croatia in scoring average with 11.2 points. Actually, its rather surprising the little action he enjoyed given his reliability with his back to the basket. He uses his body quite well, showing remarkable footwork in the post, and the ability to finish with both hands even in semi-hook fashion. Given his size, it was very difficult for his rivals to stop. He can also put the ball on the floor and has a decent, albeit inconsistent shot. The biggest knock on him is his poor athleticism; as he shows heavy feet and poor reactiveness. He has a nice frame that he still needs to completely fill out, so strength wont be a problem. All in all, he has some nice potential, and an excellent chance next season to showcase his abilities in the Adriatic League with Siroki.
Read full article

Pooh Jeter
@DraftExpress
One last name, a player that probably doesn't have great NBA potential. Not strong or athletic enough, but a player with great fundamentals. Had some extremely impressive shooting performances (20/25 from the FIBA 3pt line). Showed the ability to put the ball on the floor and most importantly, never forced any situation, always trying to do the easiest and most productive thing. He might not become a star, not even in Europe, but he'll probably have a very nice career.
Read full article