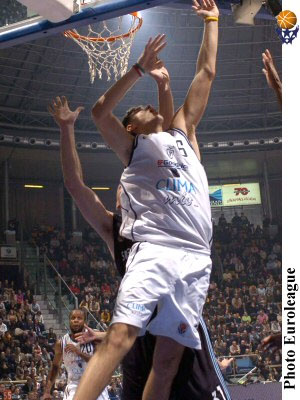 Strengths
Stefano Mancinelli is clearly an NBA caliber athlete. He's a well built 6-8 forward, who runs and hustles all over the floor showing explosiveness and a great vertical leap. His team, Fortitudo Bologna, runs an uptempo offence and that lets him shine while closing the primary fastbreak with spectacular dunks or going for dynamic offensive rebounds.

He usually plays as the starting small forward or as the 6th man (there is no real set starting line-up for this team), giving the team an energy boost on both sides on the floor. On defense he's often matched up with bigger players which he doesn't suffer too much playing against, but who he can often outrun them on the other side of the ball. He's always a threat in the passing lanes or to come up with a block from the weak side.

In the half court, he usually hangs out around the 3 point line, from where he's become a decent spot-up shooter, improving dramatically on what was his always biggest weakness, his lack of shooting touch. He often likes to cut to the basket, showing good hands for catching the ball, and both the strength and the will for a strong finish even if he's being contested by a big man.

He's still working on his game, even recently showing a mid-range jumper off the dribble, a fundamental he never mastered. He's a very good passer from outside of the 3 point line, both able to find slashing cutters or make the entry pass to his big man.

Mancinelli has been an important contributor for one of the top teams in Europe, and he's one of the most proven international players in the draft this year.

Weaknesses
Mancinelli is clearly a small forward at the NBA level, but the best things he's done so far were from the power forward position, taking advantage of his quickness and athleticism against big men.

While that's a pretty common situation for a player coming to the NBA, having to adapt to moving down one spot position wise, Stefano has sub-par fundamentals to consistently play the 3 position.

We already stated how he improved his outside shot, but he has a very low release (and ugly mechanics, but that's not relevant as long as the shot ends up in the basket), he absolutely needs to have his feet perfectly set and to be in his favored spots behind the arc. It's unlikely that teams will take advantage of his shooting touch, but he has still a long way to go, because for such an unnatural shooter, adapting to the NBA 3 point line won't be automatic.

His ball handling is suspect, looking tentative when pressed and having little vision off the dribble to find the open man, and lacking a proper use of his off hand as he always tries to go left. Because of this he is not as dangerous as he should be at beating the big men he's often matched up with off the dribble.

While he surprised everyone by hitting some shots off the dribble (going left), he's still robotic in the process and it's highly unlikely he could do it effectively in the NBA.

His limitations lead to the fact that at this point he's not a player who is able to create his own shot and create for teammates, not even at the European level. There are some question marks about his potential, is he going to be just a very good energy guy or will he develop in a more complete player? Scouts might also wonder, what is the one thing that he really does well for him to earn playing time off the bench?

Competition
Fortitudo Bologna is one of the top teams in the Italian league, which is the premier league in Europe along with the ACB Spanish league. Fortitudo (or by their sponsor's name, Climamio) is currently playing in the Italian playoffs.

Mancinelli played in the Euroleague Finals last season and his team made it to the TOP16 of the competition this past year.

He's played for the Italian national team already and was the last player cut from the team that won the silver medal in Athens last summer. He's going though to be in the roster for the 2005 European Championships this summer in Belgrade.


Outlook
The biggest knock on Mancinelli's draft status is the fact that he is somewhat of a tweener for the NBA at this point. The biggest asset he has at the European level is his athletic ability, but he won't be considered a freak of nature at the next level so that alone won't guarantee him success in the NBA. He needs to develop more of a small forward game, but while he's shown the right work ethic, he's hardly as polished as other international NBA prospects, and that will make it very tough for him to find a spot in the first round.

His game, though, could be better suited for him to become a role player in the NBA rather than to become a superstar in Europe. It might be easier for him to translate his current game at a higher level rather than make the next step in Europe, by developing skills that are at a very raw stage at the moment.

For the near future in the NBA, the biggest question he needs to answer is about his accuracy from outside of the 3 point line. He might remind of Houston draftee Bostjan Nachbar, whose inability to be consistent from behind the arc cost him the possibility of finding minutes on the floor for his team. While Stefano is probably stronger both physically and mentally than the former Benetton player, he hasn't shown the same shooting touch in the Italian league.

Comments
Most International prospects are big men who are able to play outside the paint, something scouts have problems finding in the NCAA. Mancinelli is a small forward who has often played the power forward position, which is something that is not incredibly hard to find amongst the NCAA draft class.

What should make a General Manager decide to invest in him? First of all, this is a guy who's proven himself at the highest level outside of the NBA. Second, this is a guy that already accepted playing a secondary role and had an impact that way, so it's easier to imagine him doing the same rather than converting a scorer into a role player. Third, he showed a promising attitude to work on his game, and there's still the option to leave him in Bologna for another year or more, to find a more ready player later.

While all this isn't probably enough to warrant a selection in the first round, Mancinelli is likely to go in the first half of the second round.

Euroleague: Youngsters Fighting for a Place Under the Sun

Matiz Tratar
@DraftExpress
A guy who was once barely considered anything more than an athletic player, now looks like a very promising small forward with some very intriguing developing skills, as he has shown in this year's Euroleague.

Besides his personal effort, there were two big things for Stefano Mancinelli to work on heading into this season: gaining playing time and especially meaningful minutes at the small forward position, as he was too often used as a power forward by his team. Despite playing for a very competitive team (Climamio finished the regular season with a 12-2 record), coach Repesa has given him both, and it has paid off big time.

Of course Mancinelli has mainly been a role player for his team, another piece of Bologna's deep rotation, bringing to the court athleticism, intensity, rebounding and defense, to allow other teammates to shine. But in the process he has shown a much improved perimeter shot (he has netted 50% of his treys) as well as very nice passing abilities. Spending more time on the perimeter, he has been able to handle the ball more, revealing quite good court awareness, and looking rather comfortable. However, he has delivered most of his best performances this season in the Italian league, where for a few times he has looked like first round material.

It will be very interesting to see how Stefano evolves in the near future. His physical and skill set make him a very attractive long-term prospect, and he might end up being one of the big sleepers of this year's draft.
Read full article