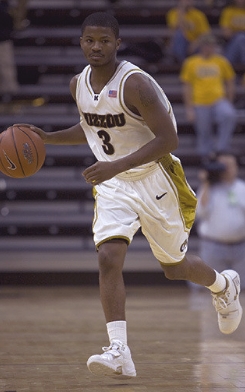 Joey Whelan
@DraftExpress
Even though Texas sophomore D.J. Augustine has gotten more press than any other Big 12 guard so far this season, Missouris Stefhon Hannah has been right on his tail, racking up impressive numbers in his first 14 games this season. The former transfer from Chipola Community College ranks in the top ten in the conference in five different categories, including leading the Big 12 in free throw percentage. The senior has been a big part of the solid start that the Tigers have had this season.

Physically, Hannah has the tools to make him a solid college point guard, but leave a few things to be desired as far as being a pro prospect is concerned. At 61 he isnt severely undersized, but he will find himself going up against taller opponents almost every night if he were to make it to the next level. He has decent quickness which allows him to get into the lane at this level, but nothing outstanding to allow you to envision him as a great shot-creator in the NBA. Hes much better handling the ball with his right hand, and his efficiency suffers when forced to go left. Despite Missouris all-around fast paced game, Hannah does lack phenomenal lateral quickness which hurts him on the defensive end. Hannahs lack of explosiveness, and his tiny frame hurt him when he finds his shots contested around the basket.

Despite the fact that he is a point guard, the majority of Hannahs offense comes off of spot up situations. He is a solid perimeter shooter, knocking down just over two three pointers a game, and connecting on 40% of his shots overall from beyond the arc. Hannah has a nice form on his shot, but his release isnt that quick and he struggles to knock down shots off the dribble, so typically he needs some space to be a consistent threat from the outside. He does show some nice ability to catch and shoot when running off screens, something the Tigers have done a fair amount with him so far this season.

Hannah is probably at his most effective when he can get out and run in transition, as his craftiness and ability to break down defenders off the dribble make him hard to stay in front of on the break. He has shown excellent court vision this season, picking up just over five assists per game, although he does occasionally try to force the issue passing the basketball. Hannah also seems to be more comfortable handling the basketball in the open floor than he does in half court sets. While he will rarely lose control of the ball when on the break, at times he will get stripped while maneuvering on the perimeter or attacking the hoop.

The Mizzou senior struggles quite a bit with his mid-range game. While he is able to beat defenders off the dribble, Hannah has yet to show the ability to pull up and knock down shots from inside the perimeter. When he attacks the rim, there is also a fair amount of inconsistency in Hannahs game. He typically exhibits solid body control around the basket, but his lack of explosiveness and overall strength makes it tough for him to finish in traffic. Often Hannah will try to float his shots over taller players, but he doesnt shoot a very high percentage with these attempts.

Defensively, Hannah is a hard worker, but sometimes his overzealousness gets him into trouble. This has a lot to do with the style of play Missouri implements, though. Hes probably not quite as quick as he needs to be to put as much pressure on the ball as Coach Anderson needs him to in their system. While his active hands and anticipation earn him nearly two steals per game, Hannah has a tendency to over commit on help defense, which often leads to him getting burned by his man. His lack of bulk makes it difficult for him to get through (or quickly recover from) screens that are set on him, and his lack of size means that taller perimeter players can shoot over him fairly easily.

As a player, there is a lot to like about Hannahs game, and he is sure to find success at the professional level in some capacity. He is a solid outside shooter, possesses good court vision and is a steady all-around player. The majority of the issues with Hannahs game stem from his physical limitations. His 61 183 pound frame hurt him around the basket and in some senses defensively. While he at the moment he looks like a long shot to be drafted, he as a very good chance to get invited to Portsmouth to improve his chances after the season is over, and still has the entire Big 12 slate to draw attention to himself in the meantime. Winning will go a long ways in helping his cause.
Read full article