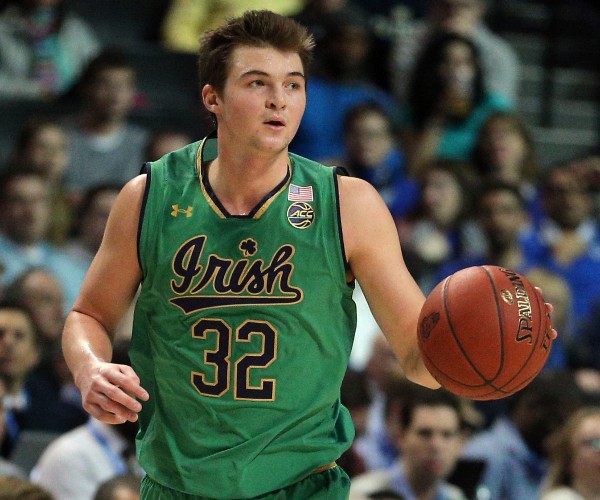 Steve Vasturia was the quintessential role player for a Notre Dame team that went 32-6 and won its first conference championship in program history. While Vasturia scored in double figures in less than half of Notre Dame's regular season games, he stepped up during the NCAA Tournament in a big way, averaging 13.5 points per game and playing a key role in the Irish's run to the Elite 8. With Jerian Grant and Pat Connaughton now in the NBA, Vasturia has the opportunity to take the next step forward in his development and improve his status as an NBA prospect.

At 6'5 with a 211-pound frame and an average wingpsan, Vasturia does not have the most impressive physical profile for an NBA shooting guard. He is an average athlete, as well, even though he maximizes his physical abilities due to his savvy and feel for the game. Regardless, Vasturia hardly stands out from a physical perspective, even if he played well against more athletic players on a nightly basis. 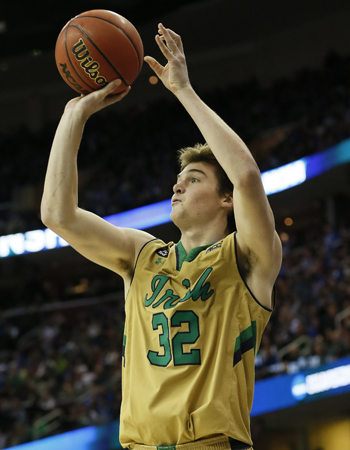 On offense, Vasturia averaged a mere 12.4 points per 40 minutes pace adjusted on just 13.2% of Notre Dame's possessions. While he was rarely featured in Mike Brey's offense, he did an outstanding job of moving without the ball, running in transition, cutting to the basket, and spotting up along the perimeter. Likewise, he is an unselfish and intelligent player whose willingness to make the extra pass and scrap for loose allowed him to emerge as an essential component of Notre Dame's elite offense.

A majority of Vasturia's looks as a sophomore were jump shots and he made an impressive 41.5% of his overall attempts. He was particularly effective as a spot-up shooter (43.4% FG), and he made 48.4% of his open looks. Almost 90% of his jumpers came from beyond the arc and Vasturia improved his 3FG% from 32.9% during his freshman year to 41.1% as a sophomore. On film, he demonstrated NBA range with an excellent shooting touch and consistent mechanics. Vasturia was a noticeably less effective shooter when he was guarded and he rarely had the opportunity to shoot off of the dribble, but he showed the potential to continue to develop as a shooter as his role increases for Notre Dame.

Vasturia was not just a shooter, either. Despite his average first step and limited ball skills, he did a solid job of getting to the basket and completed 58.2% of his attempts. He attacked the basket aggressively with effective body control and a soft touch around the rim, showing little fear going against far bigger and more athletic big men. While he may never become an NBA-caliber slasher, he seems to know his limitations and, at this level, relies on his instincts to find his way to the basket.

While he looked solid in a limited number of pick-and-roll and isolation situations, he lacked the ball handling and first step to consistently create looks for himself and must improve as a shot creator. Though he took a big step forward offensively as a sophomore, he still must prove to scouts that he can contribute offensively at the next level beyond his shooting, especially given his physical limitations.

On defense, Vasturia lacks standout lateral quickness, but he worked hard to stay with his man, both in one-on-one and in pick-and-roll situations. Getting stronger will allow him to fight through screens more effectively, but he will undoubtedly struggle to guard NBA-caliber athletes on the perimeter. His combination of fundamentals and intensity, as well as his ability to play within Notre Dame's team defense, alowed him to competently defend good offensive players at this level, but it remains to be seen how he stacks up against NBA competition.

Ultimately, Vasturia is a role player whose perimeter shooting ability, basketball IQ, and gritty style of play make him an intriguing prospect. Notre Dame will be a very different team next season and Vasturia's ability to step into a larger role will likely have a lot to do with the Irish's success in 2015-2016. Scouts will be watching, as well, to see just who Vasturia is as an NBA prospect, whether he remains a career role player or if he can take his game to the next level.
Read full article