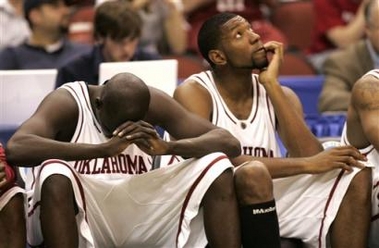 Eric Weiss
@DraftExpress
Taj Gray did nothing but help himself with his play in Orlando. Grays energy and relentless aggression led to a high level of productivity in a camp where stats were hard to come by. Gray was a force at times on both ends of the court, using his superior quickness and explosive burst to block shots, tip loose balls, and coral rebounds. Offensively, Gray showed much better technique on his jump shot as well as from the free throw line. More than anything, it was Grays heart and intensity that stuck out the most.

As far as weaknesses were concerned, Gray still did not show tremendous footwork in the post and his fundamentals on his rebounds were hit and miss. As a face up power forward, Gray will need to hone his ability to consistently hit the mid range jump shots and use the threat of that shot to drive when the ball is in his hands.

Grays game is most similar to that of David West. West took 3 seasons to fine-tune his game and develop his go-to moves that enabled him to star last season for the Hornets. Gray has the beginnings of the skill set and the energy to develop into this type of player if he works at it. He is a superior athlete and that should get him drafted somewhere in the early-mid 2nd round.
Read full article

Eric Weiss
@DraftExpress
Gray put on an impressive display for the second day in a row. He used his athleticism to block shots throughout the game, and elevate above everybody for rebounds on both ends of the floor. On one occasion, Gray grabbed a defensive rebound he had no business getting, ran the floor to get an offensive rebound, and threw down an impressive putback dunk. On offense, he had some spectacular dunks, including one towards the end of the game where he took off from the block and threw the ball down hard while getting fouled by Justin Williams. Gray tried too hard to create his own look on offense on a few occasions, which led to some turnovers. However, it appears he has added a nice mid-range shot to his repertoire, and his footwork is improving to the point where he can create his own look off the dribble from time to time. Gray has helped his stock as much as anybody, and has the potential to be a great hustle player in the NBA.
Read full article

Joseph Treutlein
@DraftExpress
It wasn't so much his overall stat-line (although the fouls and turnovers begin to tell the real story) that hurt Taj Gray's stock today as it was the way he looked while he was out on the floor playing in the last college game of his career. Gray was a complete non-factor for huge stretches of OU's loss today, not looking to involve himself in the offense, letting smaller and far less athletic players get the best of him, settling for shots that he should never settle for and generally looking more like a freshman with the fouls he committed and the decisions he made than a senior about to graduate to the NBA.

Two straight charges on back to back possessions really hurt any momentum his team had going for it as they tried to come back from a double-digit deficit late in the game. He then capped off his performance with an incredibly foolish and completely unnecessary foul far from the basket that finally sent him to the bench with 5 fouls and severely hurt any chances his team had of coming back to win the game.

It's one thing to play poorly, but what was most baffling about his performance was the fact that it didn't seem to phase him that much. Gray is usually an emotional player who wears his heart on his sleeve, but in the game that should have had him as pumped as he's ever been in his career he came out completely flat and did not bring any of the energy he usually provides his team as his best contribution on the floor.

Gray will now kick off his preparations for the NBA draft, with many private workouts likely in his near future. What end of the 6'8 mark he ends up on in measurements might play the biggest role in where he lands in the NBA draft.
Read full article

Strengths
Gray is an energetic, versatile and skilled PF who is probably the biggest reason behind Oklahoma's success this year besides the coaching of Kelvin Sampson. It's scary to think that this is just his first year of playing Division I basketball, his rapid improvement over the season considering the transition he's had to make has been nothing short of remarkable for those who have followed him.

Gray is extremely athletic and will likely thrive in an up-tempo offense; he runs the floor very well and has an outstanding vertical leap. He gets off the floor instantly and can bounce back quickly to go up for the rebound or blocked shot. Gray is a fantastic player to have in transition because he can handle the ball for short periods of time, pass real well, or get off the floor to finish with a thunderous alley-oop.

Gray is a skilled and physical post player who can be counted on for a field goal when his team needs it most. He is strong enough to establish position deep in the paint, and once he receives it he has the skill, smarts, quickness and strength to work his way to the basket and finish with a great touch, being almost automatic from short range. He is not afraid to take the ball up strong to the hoop, often drawing contact and finishing, but also showing that he can nail the turnaround jumper if his matchup over-commits.

His defense is pretty solid, showing good lateral quickness and very nice shot-blocking ability thanks to his strength, athleticism and an above average wingspan.

Gray shows a very good court demeanor, he is unselfish and very energetic, knowing how to get the crowd fired up with the way he leaves it all out on the floor, but especially with his shot-blocking ability and highlight reel finishes. He's a real fun player to watch, a true sparkplug. He also has no problem doing little things like diving for loose balls if it means giving his team a better chance to come up with the victory.

According to people around the team, especially Coach Sampson, Gray has an outstanding work ethic and is often the last player to leave the gym after practice. He is a strong player, but has the frame to add even more bulk if needed.

The most intriguing part of his game is probably his outstanding court vision and passing ability. Gray has a great feel for the game, and has shown to be an excellent interior passer as well as a player that can make good decisions with the ball out on the perimeter, be it finding the open man while he cuts to the basket, or just making a simple bounce pass to the open man for an easy bucket. Considering that he was playing Junior College just last season, it wouldn't be a stretch to say that the game comes easy for him.


Weaknesses
Measurements will be key for him. As long as he is a legit 6-9 he will be fine, but anything under this is going to spell trouble for him.

Gray is a very complete player; he really does a lot of things well, but still has a few things he needs to work on.

His free throw shooting is his most obvious weakness right now. He's shooting 60% for the season and that needs to improve.

Gray plays with a lot of emotion, and while that's certainly a good thing, it can also get him into trouble sometimes, usually in the form of early foul trouble.

While Gray is a solid post player at the NCAA level, he often relies too much on going to his right shoulder, and you can tell that teams have started to pick up on that as conference play progresses. While his post game is an excellent weapon for the Sooners, it would be even more lethal if he improved his footwork and developed some more moves to compliment his strength and soft touch.

Gray's face up game looks good at times, but still needs work to really become a legit NBA Power Forward. His shooting mechanics are bad (releasing the ball from his chest as you can see in his headshot) and he has yet to show that he can hit jumpshots consistently.

When it comes to rebounding, Gray appears to be too used to playing at the junior college level where he can catch any rebound he wants with his size, strength and athletic ability. He needs to work on boxing out his man a little better.

Competition
Gray went to school for his first two years out of high school at Redlands Community College in Oklahoma for academic reasons.

In his second season at Redlands, he averaged 18.1 points, 10.8 rebounds, and 3.3 blocks per game. He was voted on to the first-team NJCAA All-American team and was named the Region 2 Player of the Year. His team lost in the NJCAA tournament finals.

Gray was named Kansas high school player of the year in his senior season.

His coming out party on the national stage was probably the defeat Oklahoma handed UConn in early January, where he dominated potential lottery prospects Charlie Villanueva and Josh Boone with 24 points, 10 rebounds and 4 blocks. Had an equally impressive showing against rivals Oklahoma State with 22 points, 8 rebounds, 5 assists and 2 blocks.


Outlook
Gray will have a very tough decision to make this offseason. On one hand, he is in a fantastic situation at Oklahoma, and most of their core players are returning next season with some good JUCO recruits coming in as well. He still has some holes in his game that can be ironed out with another year under Coach Sampson and Hoffman.

On the other hand, his stock has to be skyrocketing right now with the way he has been playing, and if it keeps rising after the NCAA tournament, it might be tough to turn down the lure of being a first rounder.

As a junior he can test the water this year if he wants to. That would allow him to attend the Chicago pre-draft camp, find out what he needs to work on for next year from the NBA scouts, and pick up some valuable experience going up against some of the top players his age in the world, just to see where his game stands.
Read full article