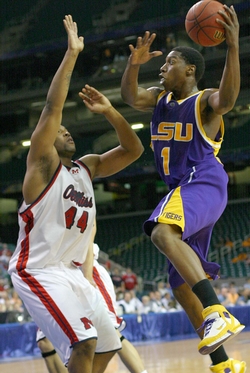 One year ago, we predicted that a strong season would help put Tasmin Mitchell back onto the NBA radar. Mitchell definitely met our expectations, posting career highs in points and rebounds while boosting his efficiency and shooting percentages in the process. He declared for the NBA draft, but withdrew his name from consideration, solidifying his status as the unmistakable leader of the young LSU Tigers. As a senior, Mitchell must continue to prove to scouts that he can further expand his game to the perimeter, while still playing efficient basketball.

From a physical standpoint, Mitchell is a mixed bag. Standing 67, he has good size for an NBA small forward, even if last season he proved himself to be more of a face-up power forward, in the mold of a DeMarre Carroll or James Johnson. As we have said before, he has a very good frame and solid quickness, but overcoming his lack of standout athleticism and length will be obstacles for him at the next level. He is a very intelligent player, however, and very well aware of his athletic limitations, both of which help his standing in the eyes of NBA scouts.

Offensively, Mitchell has a combo-forwards skill-set and was consistently a very efficient scorer. Boasting career high field goal and three-point field goal percentages (52.2% and 52.6%, respectively), not to mention a True Shooting Percentage of 57%, Mitchell showed that he could score effectively and efficiently in a variety of different ways. He hits open jump shots consistently, showing a somewhat stifled shooting motion while almost always fading away from the basket. Nonetheless, he manages to put very good arc on his shots and he maintained his shooting form even when his shot was contested, a skill which will prove valuable at the next level.

While he has displayed solid range from beyond the arc, he only attempted 19 three-point field goals last season, which is significantly less than the 109 he attempted as a sophomore. It would be unlike Mitchell to sacrifice team play for personal statistics, but it certainly would not hurt if he could more often prove his perimeter shooting abilities to scouts.

While he showed proficiency as a spot-up shooter, Mitchell continued to show flashes of a mid-range game, though at this point he is more comfortable operating out of the post with a barrage of turnaround jumpers and cuts to the basket, rather than a more traditional perimeter game. Considering his size, skill, and athleticism for his position at the collegiate level, Mitchell should really attack the basket more often and exploit the constant mismatches he sees on the offensive end of the floor. One of the reasons it seems as though he does not utilize his slashing game is that his ball-handling skills are still fairly crude at this point. A better handle with both hands, though particularly with his left hand, would allow him to open his game up tremendously and is vital if he transitions to the perimeter at the next level.

In the post, he has superior quickness and footwork in addition to his already high skill level, which allows him to score in a variety of different ways at this level. He plays with a high degree of aggressiveness and intensity, as well, and always seems to be a factor on any play, whether it be diving for loose balls or on the offensive boards. His scrappy play will be yet another valuable skill at the next level, particularly considering the ways that most combo-forwards are utilized in the NBA.

Mitchell is a very active defender, incredibly aggressive and smart, which are attributes that combine to make him quite a presence at the collegiate level. Though he has average lateral quicknesswhich certainly calls into question his most effective NBA positionhe can guard both perimeter and post players relatively well at the collegiate level. Perhaps his most impressive intangible on the defensive end, however, is his ability to communicate. He is a great team defender and is constantly talking to his teammates, making sure they are in the right place at the right time. Whether or not his abilities and intangibles translate to the next level, however, is unknown and complicate his NBA potential considerably.

Tasmin Mitchell has improved since his freshman year at LSU, but there are still many questions surrounding his NBA potential, as he may not be deemed to posses the upside to compensate for his average skill-set and athleticism. Next season will be telling in terms of Mitchells future. He will once again be the top option on offense as well as Louisiana States defensive anchor. Opportunities for him to show scouts what he can offer at the next level will be plentiful and, after entering the draft last summer, he has a good idea of what aspects of his game need improvement.
Read full article

Joseph Treutlein
@DraftExpress
Tasmin Mitchell looks to rebound this year after suffering a horrendous ankle injury as a sophomore just three games into his season. It appears as if he will be granted a medical redshirt, leaving him two years to show his stuff to NBA brass. The departure of Anthony Randolph to the NBA and de-commitment of current UCLA big man J'Mison Morgan has opened up plenty of opportunity for Mitchell to put points on the board this year for the Tigers.

Standing 6'7 and weighing a legit 235 pounds, Mitchell fits the ideal mold physically of a power wing. He is incredibly strong and uses his strength to his maximum advantage, making up for some of the deficiencies that he has. He is not blessed with an outstanding wingspan, nor is he overly athletic, but he uses his cerebral style of play and high basketball IQ to overcome his athletic shortcomings.

Mitchell appears to be an absolute coach's dream as far as intangibles are concerned. He is a vocal leader who plays every minute on the court as if it were his last, diving on the ball for loose balls and constantly hustling for rebounds out of his area. Blessed with a high basketball IQ, Tasmin seems to have a knowledge of the game that is uncommon amongst most players his age.

Offensively, Mitchell puts points on the board in a variety of ways. He shows a strong dribble drive when going towards his right, finishing well around the rim with either hand. The Louisiana native is also strong enough to post smaller defenders, and even shot the ball with 37.6 accuracy from beyond the arc. A strong mid-range jumper was also shown, giving him a nice arsenal of skills for a player looking to show scouts that he can transition from the power forward position. He also scores a nice amount of points through simply being at the right place at the right time, seemingly always flashing in the proper areas of the defense to free himself up for open looks.

Passing the ball is one area that Tasmin has shown nice promise, primarily due to his high basketball IQ. Not a guy who is going to completely collapse a defense, he does a good job of finding open shooters when he is cut off en route to the rim.

Ball-handling is an area of concern for Mitchell, especially going left. He drove left only 25.81% of the time as a sophomore, looking increasingly uncomfortable when doing so. Even when going right, the former McDonald's All-American shows off a high handle that can be quite erratic at times.

While Mitchell has improved mightily shooting the ball, he could still use some serious polish before he will be considered a threat from beyond the arc at the next level. His mechanics can be a bit wild at times and his shot is a bit slow, with most of his made three pointers being when he was left completely open. These are areas that can be fixed with proper skill training and development, but should be identified before he makes the jump to the NBA.

There is little not to like about Tasmin on the defensive end, though. He is strong enough to guard power forwards and quick enough to guard wings, making him incredibly versatile. Mitchell is able to corral a nice amount of steals without over gambling, and is also a strong rebounder for a small forward, bringing in about 6 rebounds per game.

This season will be crucial for Mitchell to prove that he is able to live up to the acclaim that he had as a prep star, ranked 10th in the class of 2005 according to the RSCI. A strong season will help put Mitchell back on the NBA radar, and it appears that he could very well be in line to do that under new LSU coach Trent Johnson, who will probably value his all-around skill-set dearly. First he needs to show that he is completely healthy, though
Read full article