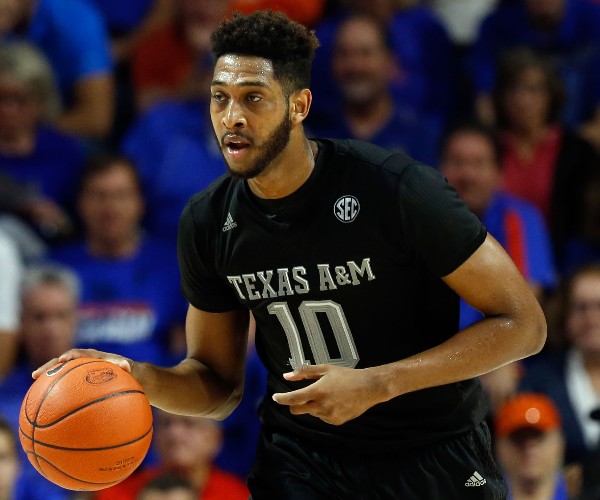 Tonny Trocha-Morelos, a native of Cartagena, Colombia, arrived in College Station by way of St. Thomas School in Houston, Texas. Trocha-Morelos competed on the national stage for Colombia in the FIBA U18 Americas tournament in 2012 and quickly moved to the United States where he was widely regarded as a four-star recruit. He signed with Texas A&M in November of 2012 but did not make his debut until the 2014-2015 season after experiencing difficulties in gaining entry to Texas A&M, in large part because of entrance language requirements. After playing sporadically as a freshman, averaging only ten minutes per game, Trocha-Morelos saw a significant increase in opportunity as a sophomore, averaging over 17 minutes per game. 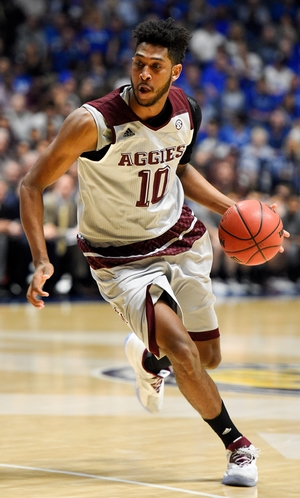 Standing 6'10, Trocha-Morelos has good size for the power forward position, coupled with a wingspan that is likely larger than his listed height. Trocha-Morelos has a decent frame, but needs to continue to add strength to maximize his potential. He isn't an elite level athlete, though, he is very mobile and runs the floor well, but lacks explosive vertical ability.

Trocha-Morelos saw the majority of his offensive possessions featuring as a screener, off-ball cutter and spot up shooter. He shows solid basketball instincts, and is able to find open space which creates opportunities for catch and finishes. Despite being able to find open space, Trocha-Morelos has poor hands and often times struggles corralling what should be easy dump offs for dunks or layups. He has decent touch around the rim, shooting 54.9% on attempts around the basket, per Synergy Sports Technology, but struggles to finish when he is forced to play through contact. Despite his skinny frame and lack of elite athleticism, he does a good job of battling on the offensive glass to the tune of 3.8 offensive rebounds per-40. His lack of explosive leaping ability from a standstill is concerning, but coupled with his lack of strength and poor hands it could be a significant hindrance to his development.

With his combination of size and ability to space the floor, scouts may be appropriately intrigued, but equally skeptical. Only attempting 2.2 three-point attempts per game as a sophomore is not statistically significant, but the fact that he made 37% of his attempts makes this something to track moving forward. His touch from the perimeter looks natural, fluid and effortless at times, but his struggles from the free-throw line, where he has shot only 46.3% over two seasons, are concerning. He has a tendency to short-arm his follow through, not quite finishing as high as he should, yet on the perimeter he does a tremendous job of elevating on balance, shooting the ball at the peak of his jump, and following through.

Trocha-Morelos found success using his shooting touch to stretch defenses, where he shot 40.9% in all pick and pop situations per Synergy Sports Technology. If he doesn't have an open shot Trocha-Morelos struggles to put the ball on the floor and be effective, often times being out of control attacking the rim or settling for a contested jump shot. When Trocha-Morelos has time and space he is a capable passer, evidenced by his 2.3 assists per-40 as a sophomore, but if forced to make passes under pressure, on a nail catch for example, he struggles to make good decisions.

Trocha-Morelos' lack of lower body strength is evident in his inability to be effective on the low block. He struggles to gain and maintain deep position, often allowing opponents to displace him with relative ease. He prefers to pound his dribble trying to gain an advantage in order to finish with a right hook. Trocha-Morelos has shown some decent footwork but it is limited because of his lack of lower body strength. If he can't get to his right hook he will settle for difficult, typically off-balance, fade-away jump shots.

Trocha-Morelos is not the difference maker that his size and length may initially suggest. His per-40 numbers on the defensive end leave much to be desired with only 1.4 blocks and .9 steals per-40. That said, he shows flashes of being a capable, if inconsistent, one-on-one low post defender, where he contests vertically without fouling. His toughness can come and go though, often allowing opponents great position in the paint without much resistance. His competitiveness on the inside needs to be more consistent this season, along with a greater focus on the defensive glass, where only averaged 6.1 defensive rebounds per-40 as a sophomore.

Trocha-Morelos really struggles when forced to guard on the perimeter. He doesn't possess the lateral mobility or quickness to keep quick power forwards in front of him, nor does he seem comfortable attempting to move his feet and recover to shooters. In one of the best games of the 2016 NCAA tournament, Northern Iowa continually put Trocha-Morelos in spread pick and roll action and challenged him to guard multiple actions while not losing track of his man, who was often a stretch four capable of making shots from the perimeter. While he isn't adept on the perimeter, he does show good anticipation, often times drawing charges on the drive or as a weakside defender.

Already 22 before beginning his junior season, Trocha-Morelos has an opportunity to showcase his skill alongside other talented players such as Tyler Davis and D.J. Hogg this season in College Station. He will have to continue to make strides on both ends of the floor, and on the glass, to maintain his intrigue among NBA scouts considering his age, but he will have an opportunity to produce for Coach Billy Kennedy and the Aggies.
Read full article

Strengths:
-Has good physical attributes for a big man, including size, long arms and a nice frame
-Very mobile player. Runs the floor well, can play above the rim, quick second bounce
-Can make a mid-range jumper
-Soft touch around the basket
-Good defensive potential. Shows nice timing as a shot-blocker. Can step out on the pick and roll. Agile enough to contest multiple shots around the basket in a single possession
-Puts a good effort in on the glass

Outlook: Also known as Tony Trocha. Springy, agile big man with strong physical attributes. 18 year old import from Colombia who played well this past summer at the U18 FIBA Americas Championship. At a very early stage of his development both physically and skill-wise, but shows nice tools in a couple of different areas. May be eligible to enroll in college at the semester break in December reportedly. Will likely need some time to get his feet wet.