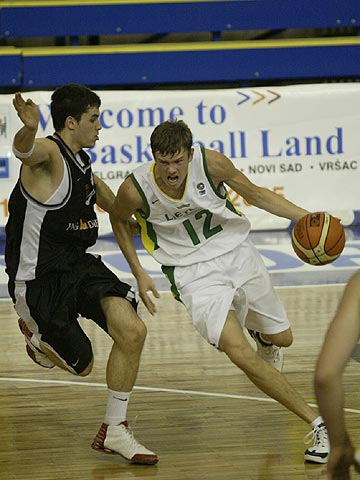 Roundup: Rollercoaster-Ride Batum On the Upside

Luis Fernández
@DraftExpress
Coming off a disappointing one-year Spanish adventure (he was loaned to Unicaja Málaga), Vilmantas Dilys is back with Zalgiris, and after some weeks getting burn in the first team, hes playing now with the second squad in the NKL, the Lithuanian second division. A very weak competition, hes averaging there 9.37 points and 5 rebounds in 25 minutes. But it gets a lot uglier when you check the last three-game clip, as he was only able to average 0.7 points and 1.3 rebounds in 19 minutes of playing time, always as a starter.

Quite a gifted player given his 6-9 (or taller) body, combined with solid athleticism at the small forward position, plus some natural talent to play this game, Dilys has always lacked consistency in his game. Hes as able to deliver fantastic offensive outbursts as he is capable of going completely unnoticed on the floor. As it has been usual in the last years, hes a player who lacks fire and intensity. More particularly, I think we can confidently label him as soft.

Its quite depressing to watch him going against younger guys and still settling for jumpers and fade-away moves, always trying to avoid contact, instead of attacking the rim or looking for good options near the basket to cash in off his superb length. Although quite in love with his own shot, Dilys still hasnt been able to gain enough consistency to live off his perimeter stroke, so his whole game heavily depends on a very unreliable weapon. Indeed, its not surprising to see that he shoots more often from the three-point line than from inside the arc (he combines for a very poor 38.5% from the field); neither is his pathetic average of 0.5 free-throws attempted per game, which speak volumes about his aggressiveness playing the game. And it doesnt get much better on defense, where hes easily outhustled.

At this point, its pretty hard to expect anything out of him anymore for very high competition, although hes a talented guy and theres always the possibility of a turning point.
Read full article

Luis Fernández
@DraftExpress
You will find very few guys as inconsistent and irregular as Dilys. We had seen him earlier this year winning MVP honors with Zalgiris in the Vilagarcía Basket Cup with an impressive outing (its always impressive when you see a 6-9 athletic guy playing almost as a guard, regularly hitting his perimeter shots, passing the ball very well or even successfully attacking the basket), while he went completely unnoticed whenever we saw him in this tourney (he had a few nice statistical efforts, though). Hes still the very same gifted and talented player, with a long and promising physical set, athleticism, some serious flair playing the game and a bunch of guard-esque skills; but his mental struggles are really hard to swallow. He gets dissolved as easily as sugar.
Read full article

The European Junior (U-18) Championships: The Small Forwards

Luis Fernández
@DraftExpress
Among the theoretical team leadersand Dilys was definitely supposed to be the man for Lithuania-- no one showed as much inconsistency as Dilys. He could very well go completely unnoticed during long stretches, and then suddenly overwhelm you with a spectacular play. Unfortunately, the first feeling was far more dominant than the second, leaving a certain feeling of overall disappointment here in Belgrade.

A 6-9 small forward with good athleticism, he has a guards mentality without good enough ball-handling and perimeter shooting skills to make it playing outside successfully on a regular basis. Its not that he doesnt feature these skills-- indeed he does, even fairly nicely for a small forward-- but perhaps still not consistent enough for the type of game he likes to play. I dont think we would be totally wrong saying that he was a kind of poor mans Korolev out there. On the other hand, hes still developing his game, and any improvement in these skills will serve him greatly as a mature player.

For Dilys, his scoring effort was about firing three pointers. His mechanics are not very orthodox, but thats usual among lefties, while the quickness in which he got off his shot was ok. His percentage doesnt look bad, 35%, but he was rather streaky and inconsistent getting to it.

Vilmantas enjoys nice court vision, sometimes materialized in spectacular one-handed passes across the court, or in off-the-dribble assists while slashing towards the basket, although again its not something he does regularly. He has a decent first step, but particularly his long strides help him penetrate.

Keeping the tune, hes not a defensive stalwart at this point either. Featuring nice tools, even if he needs to add some bulk to his skinny body, his intensity could be better.

Inconsistency, thats the word for Dilys at this point of his career. Vilmantas is a player whose mental strength raise doubts. He has wonderful tools to become a very good player, even potential to eventually make it to the NBA, but it appears that he will have a long road to fulfilling it, if he ever does.
Read full article