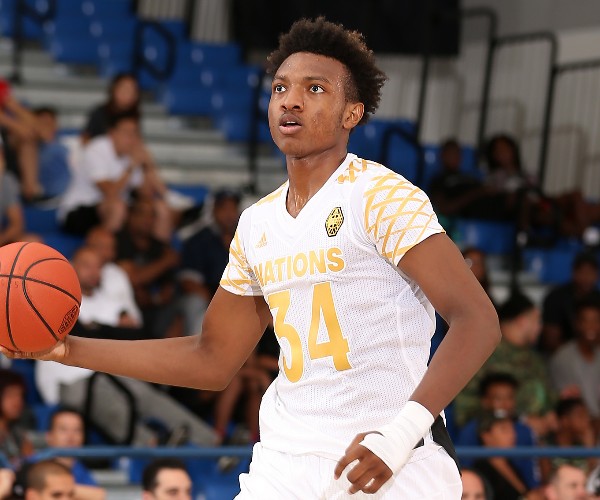 
Strengths
-6'10 in shoes with a 7'3 wingspan, a 9'0 standing reach and a 257 pound frame. Big enough to play center at any level of basketball
-Comfortable operating both facing and with his back to the basket. Skilled big man with a polished feel for the game. Uses both hands around the basket
-Great hands and timing as a cutter/finisher. Toughness, powerful frame allows him to take contact around the rim.
-Surprises you at times with his explosiveness off two feet when he has time to gather
-Outstanding offensive rebounder thanks to his length, timing and instincts. Multiple effort type guy
-Very good passer out of the post. Type of big man you can run things through in the high post and with DHOs. Solid understanding of the game for a player his age.
-Shows potential with his jump-shot. High release point and soft touch. Solid in mid-range spots, should be able to extend his game out to the 3-point line in time. Has a really nice turnaround jumper he likes to go to out of the post
-Competitive and instinctual defensively. Gets in passing lanes, has timing for blocks. Covers ground.
-Shouldn't have any problem stealing some minutes at the 4 in two-big men lineups.
-Highly productive in every setting he's played in. Ultra consistent. Fundamentally sound.


Weaknesses
-Good athlete but not exceptional. Lacks a degree of explosiveness at times with his finishes in traffic. Not the type of guy who is going to catch lobs off the pick and roll. Needs time to load up
-Lacks a degree of focus and intensity in drills. Can get a little bored at times it appears. Doesn't show much emotion. Not overly focal
-Passes up open shots in the mid-range in-game settings. Not very comfortable operating outside the paint
-Doesn't have great height for a center. Earth-bound style makes him somewhat less effective when going up against length. Needs a lot of shot-fakes to get his post-moves off.
-Motor comes and goes at times on the defensive glass


Outlook Carter is a known commodity at this stage who gets overshadowed in this class at times by the taller, longer, more explosive and flashier players surrounding him in the top ten of the rankings. Nevertheless, he seems to be the most sure-fire player of the bunch, as he's already very much a ready made product who should be able to come in and make a major impact in college from day one. Carter's NBA upside is significant as well, as he ticks quite a few boxes teams look for in a big man, somewhat in the Al Horford mold.
Read full article 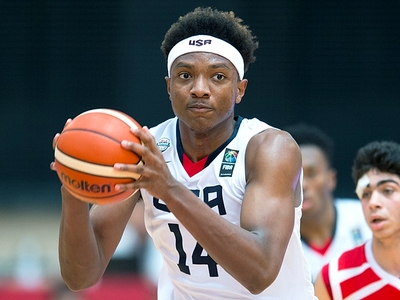 Strengths
-Strong, mature frame. Somewhere between 6'9 and 6'10, but has a huge 7'3 (or possibly 7'4) wingspan that will allow him to play the center position at any level considering his ripped 254 pound frame
-Mobile and explosive. Looks like he's improved his athleticism. Quick off his feet
-Outstanding finisher around the basket. Has great hands. Bouncy and powerful off two feet. Great pick and roll target
-Has some skill around the paint as well. Throws in swooping hook shots with either hand
-Made a handful of 3s in the EYBL as well as in the USA Basketball training camp. Looks like something he can continue to develop
-Mid-range stroke looks good
-Shows some flashes putting the ball down in a straight line. Can bulldoze his way through the lane with his strength
-Solid passer. Has a good basketball IQ
-Protects the rim with timing, length and smarts
-Loves to compete on the interior on both ends of the floor. Has no qualms about throwing his body around
-Plays with great intensity level defensively. Covers ground well

Weaknesses
-Early bloomer physically. Body hasn't changed much in the last two years.
-Very good athlete, but not a freak
-Relies heavily on his strength operating with his back to the basket. Will need to continue to add counter moves and polish as the competition stiffens.
-Still working on the consistency of his outside shot. Mechanics are sound. Just not always on balance with his footwork. Leaves a lot of his misses short
-Shot just 59% from the free throw line in EYBL play. 67% at the U17s. Career 63%
-Bites on fakes defensively. Will get backed down at times. Still working on making the right rotations and reads, particularly on the pick and roll

Outlook Starting center of US team and a catalyst of the squad. Only played 15 minutes but was dominant in his time on the floor, averaging 25 points, 18 rebounds, 2.8 steals, 2.5 blocks and 2.5 assists (and 4.9 turnovers) per-40 minutes on 62% TS%. Hasn't changed much physically, but is improving his skill-level continuously and really showing signs of becoming someone who can play both the power forward and center positions at a high level. Has an ideal combination of tools, toughness and intelligence. Mature frame and game may cause some to question the extent of his long-term upside.
Read full article

Mike Schmitz
@Mike_Schmitz
A consensus top-10 recruit, Wendell Carter (#5 Scout, #10 ESPN, #8 Rivals, #3 24/7) continues to grow, adding around an inch of height, wingspan and reach since last October according to the measurements, bringing him closer to NBA center dimensions. The same can be said for his basketball ability, as he was an absolute dominant force at times during the training camp this past week. Carter can score with his back to the basket thanks to his ripped 249 pound frame, solid footwork, and nice instincts, using hook shots and powerful explosive finishes, but didn't force the issue much, as he's extremely patient for a player his age. He was a consistent presence on the offensive glass with his near 7-4 wingspan, and defensively, wasn't afraid to throw his body around, even if he isn't much of a shot-blocker at this stage considering his excellent reach.

Carter is very mature physically, which can be misleading at this age, so he'll need to continue to work on his skill-level, particularly his jump-shot, which is not very pretty at the moment. He was one of the easiest players to pencil into the 12-man final roster from the 33 invited, as there are very few 16-years old in the world who can handle a player with his size, strength, skill and feel. He has a great future ahead of him.

Jonathan Givony
@DraftExpress
One of the youngest players in attendance at just 15 years old, Wendell Carter has extremely impressive physical tools relative to his age, measuring 6-8 without shoes to go along with a 7-3 wingspan, a 9-0 standing reach and a 246 pound frame. He has huge hands and shoulders, indicating he might not be done growing yet, and showed impressive ability to block shots and play above the rim within his age group.
Read full article