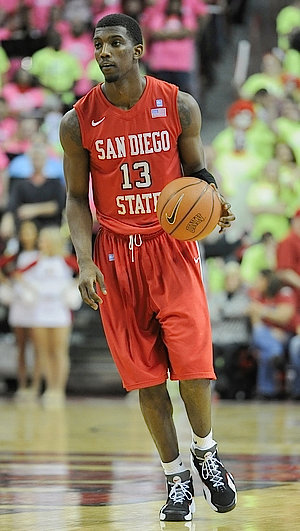 Coming off an underwhelming freshman season as a 20-minute per game role player on a successful San Diego State squad, Winston Shepard should have every opportunity to expand his role and live up to his lofty recruiting ranking as a sophomore. With teammates and leading scorers Jamaal Franklin and Chase Tapley both no longer on campus, there will be a considerable void for scoring, especially from the perimeter, for the Aztecs, though it remains to be seen whether Shepard is ready for the role.

Standing 6'7 with solid length, a decent frame, and excellent athleticism, Shepard certainly passes the eye test for an NBA wing, and he shows occasional flashes of the skills as well.

On the offensive end, Shepard is still a fairly raw player at this stage of his development, relying mostly on transition plays, straight-line drives, off-ball cuts, and offensive rebounds for his shot attempts. He's a rangy player who shows solid creativity and touch finishing around the basket, though isn't as likely to finish with power as you might expect from someone with his tools. To his credit, he is still aggressive when he does have the ball, getting to the line at a strong rate (6.3 free throw attempts per-40), though he could take better advantage of that by improving on his poor 57.7% free throw percentage.

For all of Shepard's physical intrigue and flashes of exciting plays, he's unfortunately a very inefficient player presently, being extremely turnover prone (0.27 turnovers per possession) and scoring at an awful clip inside the arc (43% two-point percentage). Despite occasionally bringing the ball up the floor for the Aztecs and initiating the team's half-court offense, while also being a respectable handler in space, Shepard's advanced ball-handling skills are not great at this stage, and he has trouble taking advantage of his athletic tools in dribble-drive situations.

Shepard doesn't do a great job getting by his man on dribble-drives, even of the straight-line variety, and when he does, he's a relatively poor finisher at the basket, not transitioning well from dribble to shot attempt. He's a better finisher in off-ball situations, but his scoring production and shooting efficiency vary wildly from game to game, which is indicative of both his limited role and a tendency to not always be completely zoned in.

Shepard's jump shot is unfortunately even further behind than the rest of his game, as he sports wildly inconsistent and ineffective mechanics, looking very out of sorts when shooting contested or pulling up off the dribble. He's a more competent shooter in space when he has the chance to get his feet set, but still has a ways to go and doesn't exhibit the best feel here.

On the defensive end, Shepard is a much more effective and developed player, being far more capable of applying his tools. He has the versatility and athleticism to defend 3-4 positions at the college level, and played very well in the Aztecs' excellent defensive scheme last year. Shepard shows a tendency to lose focus at times on this end of the floor as well, but with his size and speed, he's capable of practically locking down opposing players even when he isn't fully zoned in, a testament to his defensive prowess. It will be interesting to see if he takes the next step in his development here this season, as he likely has even more to offer on this end of the floor.

Looking forward, Shepard's simplest path to the NBA clearly lies on the defensive end of the floor, and there's no reason why he can't be one of the most disruptively effective defensive players in the country every single night for the Aztecs. Fully living up to his potential as a defender should be his highest priority, but developing into a more efficient offensive player will also be key. His jump shot is probably still a ways away from being a reliable weapon, so he should focus on cutting down on his turnovers and being more efficient from the field. The perimeter scoring void for San Diego State this season will certainly give Shepard plenty of opportunities to expand his role, and we should have get a better feel for how his offensive skill-set is evolving fairly quickly.
Read full article

Shepard is still the same excellent prospect from a physical tools standpoint as was observed the last three times we wrote about him, having all the length and athleticism necessary to defend as many as three positions at a high level. He showcased his versatility nicely here, and did a better job than he has in the past of staying dialed in consistently throughout the game.

Shepard didn't show much new from a skills perspective offensively, but did a nice job using his motor to stay involved, scoring 16 points on 7-for-12 shooting, mostly on lay-ups in transition or on putbacks. He did also knock down a spot-up three and another long two, but hit just 1-of-4 of his free-throw attempts, so inconsistency with his shooting likely still remains a concern.

Looking forward, Shepard obviously has some excellent tools that will make him someone to watch closely throughout his college career, and improving his spot shooting, straight-line drive ability, and keeping his effort level and focus up on both ends of the floor should be his priorities. He's yet to decide on a school, but has offers from strong mid-majors like UNLV and San Diego State, both of which could allow him to make an impact along with provide for room to grow his game.
Read full article

Combo forward Winston Shepard (#43 Scout, #40 Rivals, #68 ESPN) was somewhat up and down throughout the course of the adidas Nations, but there was no mistaking his merits as a prospect.

A small forward with excellent size, length and athleticism, Shepard was arguably the most versatile defender seen in LA, being the one responsible for locking down the opposing team's most dangerous scoring threat every time he stepped on the floor. He did a terrific job hounding opponents around screens and denying the ball, showing excellent lateral quickness and intensity, to go along with the size and wingspan to lock down positions 1-4 depending on what was asked of him.

Offensively, Shepard is still a work in progress, as he was most effective in transition, where his explosiveness really shines through. His shot-creating ability shows potential, mostly thanks to his long strides and terrific first step his ball-handling skills are still mostly a work in progress. Shepard has the ability to knock down the occasional spot-up three, but his perimeter shooting looks to be pretty inconsistent from what we saw.

Shepard's effort level and focus wavered at times, as did his body language, which wasn't always the best around his teammates. When he was fully dialed in and playing up to his strengths, Shepard looked every bit the part of an NBA prospect, but that wasn't always the case. Thankfully he still has plenty of time to figure things out.
Read full article

A physically gifted combo forward with long arms and excellent athleticism, Winston Shepard (#62 Scout, #32 Rivals, Unranked ESPN) is a very interesting 2012 prospect who is being recruited by many of the top basketball programs in the NCAA. Underdeveloped physically at the moment with a somewhat narrow frame, Shepard played two games at the HoopHall Classic with a big bandage on his hand, but that didn't stop him from making an impact in almost every moment he was on the floor.

Shepard's biggest virtues at the moment lie on the defensive end, where he can guard multiple positions and is extremely active. He puts good pressure on the ball, getting down in a low stance and doing a nice job crashing the glass.

Offensively, he's most effective in transition and finishing around the rim, as he's not a great shot-creator in the half-court and appears to possess poor mechanics and limited range on his jump-shot at the moment. Shepard nevertheless makes an impact with the sheer energy and athleticism he brings to the table, as he's active on the offensive glass and is always diving to the rim looking for a way to get the ball in a position to score. He's also an unselfish player with an above average feel for the game, contributing nicely to his team's ball-movement and showing good passing ability for a player his age.

Moving forward, Shepard is going to need to round out his skill-set and continue to add polish to his offensive game, but he's off to a nice start and clearly has major upside to grow into down the road.
Read full article

Jonathan Givony
@DraftExpress
Winston Shepard is a long, athletic combo forward who is extremely aggressive on the offensive end. He passes the eye test on first glance and definitely has many of the budding characteristics you look for in an intriguing long-term prospect. He's outstanding in transition with terrific explosiveness and a knack for getting to the basket thanks to a quick first step. Shepard is still working on his offensive polish, but he looks to be on his way to emerging as a legit small forward. His perimeter shooting skills need work, as do his ball-handling and passing skills, but his talent level and aggressiveness allow him to make things happen on both ends of the floor. He's a highly competitive guy capable of making plays all over the court thanks to his terrific physical profile. This gives him excellent potential on the defensive end as well.
Read full article