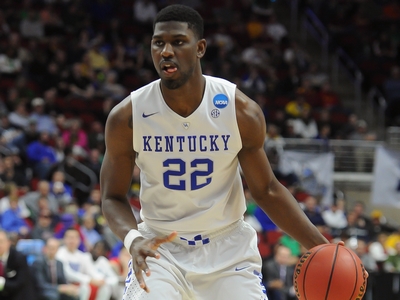 Alex Poythress was assumed to be another one and done John Calipari recruit when he entered Kentucky as the #8 recruit in the 2012 high school class, according to the RSCI. Instead, he turned into a four year player and was a crucial role player for the team throughout his career, bouncing between a starter and a sixth man. 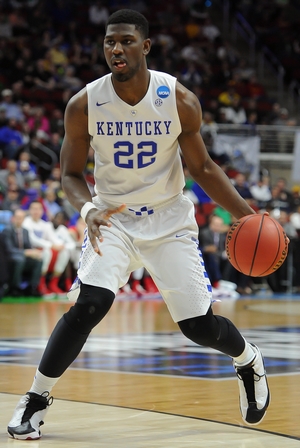 After Poythress decided to return for his sophomore season, he expressed that he wanted to develop more as a player. He hasn't quite shown the level of improvement that scouts have hoped for and there are still some question marks as to what his offensive role might be in the NBA.

Poythress' offensive production climbed up to 17.3 points per 40 minutes as a senior, still on the lower end relative to other top 100 prospects, but which represented his highest mark since his freshman year. His 65.3% true shooting percentage shows he can be efficient in a low-usage role, but he has yet to demonstrate the type of versatility teams increasingly expect from the forward position.

His draft potential still revolves largely around his physical profile with his 6'8 height and 6'11 wingspan providing him with a nice foundation as a potential combo forward. He also has some impressive athletic ability and doesn't seem to have lost anything since his ACL tear early in his junior season. He has a strong, developed frame at 240 pounds with great open court speed and explosiveness in the half court that makes him a physically imposing prospect, particularly on the defensive end.

His best offensive skill is his ability to finish at the rim where he converted an impressive 65.7% of his shots. Cuts made up 25.7% of his possessions logged by Synergy Sports Technology and he relies on his teammates to get him open looks. He does excel at cutting from the free throw line or the baseline, getting to the rim without a dribble and rising up for a dunk or two handed layup. He was one of the most impressive finishers you'll find at the college level, and will come up with a highlight reel caliber play at least once per game.

Poythress is not nearly as effective when forced to create offense on his own, as he struggles when he needs to put the ball on the floor more than once and doesn't get the same level of explosiveness after needing to take a dribble to get to the rim. Many of his cuts start close from inside the arc to limit the amount of dribble he needs to take because of his weakness in creating off the bounce. This inability to put the ball on the floor is also true in other offensive possessions including isolation or rolling to the rim off ball screens. He will likely be asked to play a more perimeter based role and will need to be comfortable timing his cuts and moving the ball from that spot on the floor.

Poythress' perimeter game is also hurt by his lack of growth as a jump shooter, as he made just 7-23 three point attempts (30.4%) and attempted just 28 jump shots overall according to Synergy Sports Technology with a 35.7% accuracy. His mechanics haven't improved and he is still a hesitant shooter with a rigid release who sprays the ball all over the rim with limited touch. NBA teams will want to see him become a semi-reliable option as a catch and shoot threat from the perimeter, as otherwise defenders will just sag off him and make things very difficult for his teammates.

There are some questions about Poythress' basketball IQ and feel for the game which is especially problematic for a senior. He clogs up space on the perimeter by filling space already occupied by a teammate, failing to have a big picture for the spacing on the floor. His 0.27 assist to turnover ratio is third lowest among all prospects in our top 100 and Poythress has been unable to create offense even by making simple passes to teammates in scoring position.

This is also manifested defensively with Poythress committing 6.1 fouls per 40 minutes. Many of his fouls are avoidable and are not caused by aggressiveness but rather are careless fouls with him reaching in needlessly or losing focus off ball, being a step late to react and having to foul.

This lack of focus and awareness is especially frustrating considering the physical tools Poythress has that gives him the potential to be a versatile defender. When he's engaged and locked in, he can stay in front of basically anyone with his lateral quickness and use his strength to assert his will on players big and small. He produces from a box score perspective by being one of 17 players in our top 100 to post at least one steal and one block per 40 minutes to go along with his rebounding numbers.

He needs to clean up his effort level and fundamentals to become a more consistent and imposing defender without fouling, both on and off the ball. This has been a problem throughout his collegiate career and defensive contributions will need to be a major part of his professional role considering his offensive limitations.

Poythress turns 23 in September and will need to answer several major questions before he can be trusted as a NBA rotation player. That said, he clearly has the body and athleticism of a NBA forward and if he can make some key improvements to his game, it's not out of the realm of possibility that he will play himself into the league down the road, possibly in an Andre Roberson type role.
Read Next...