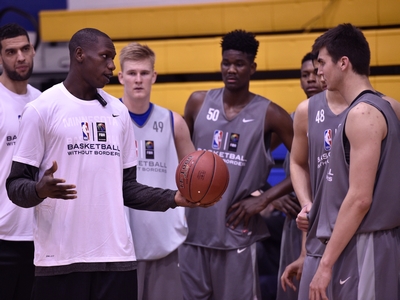 Strengths:
-Physical specimen. Has a perfect frame for a modern day NBA center. Very well proportioned with long arms. 7' 4.5" wingspan and 9' 4.5" standing reach
-Moves exceptionally well for a player his size. Runs the floor. Quick off his feet. Highly explosive. Excellent body control
-Excellent hands. Catches everything.
-Shows some ability to stretch the floor. Can make a catch and shoot jumper, or even a pull-up at times. Better from mid-range spots but shows the potential to extend out to the 3-point line. Mechanics need to be cleaned up, but ball comes out of his hand nicely, and there's no question he can develop into a very good shooter in time.
-Can attack defenders off the dribble in a straight line using a powerful first step and very long strides. Will mix in an occasional spin-move
-Has very soft touch around the basket. Will drop in an occasional jump-hook
-Outstanding rebounder thanks to physical tools, soft hands and solid instincts. Not afraid to throw his body around.
-Shows huge potential on defense when he's locked in and playing with a high motor. Talks to his teammates and shows some real personality.
-Difficult to back down in the post with his strong frame. Has very quick feet stepping out on the pick and roll. Can get down in a stance. Covers ground extremely well
-Upside is simply off the charts if he can put it all together. Situation will be huge for him

Weaknesses:
-Shows average awareness defensively. Often a step slow reacting to things on the fly.
-Doesn't always protect the rim at the level you might hope. Partially due to a lack of commitment/intensity, but also partially due to the fact that his timing is not off the charts.
-Doesn't show much of a back to the basket game. Doesn't really want to catch the ball in the post. Struggles when he does get touches down low. Footwork is rudimentary. Not much in the ways of countermoves. Needs to develop his off hand.
-Jump-shot shows great potential but is currently on the streaky side. Shoots a line-drive jumper with inconsistent mechanics.
-Doesn't really know his limitations offensively. Gets impatient when he doesn't get his touches and can get somewhat wild with his shot-selection and decision making
-Never boxes out on the glass.
-Fundamentals in general are not great. Motor/focus comes and goes. Doesn't really know how to play strong defense yet without fouling
- Already shows a superstar attitude. Faked an injury cramps and refused to participate in final day of camp, which caused many NBA scouts and the coaching staff to shake their heads.
-Very emotional on the court. Body language can be extremely poor. Complains a lot when things don't go his way and is quick to point fingers at teammates, coaches, refs, etc.

Outlook: Big man with an unlimited ceiling. Can absolutely do everything on the floor when he's playing to his full potential. Was somewhat inconsistent at this camp, struggled with the physicality of the international bigs and the fact that the game didn't revolve exclusively around him like it has in every setting in his career thus far. Has undoubtedly been coddled quite a bit thus far and there are some question marks about whether he can/will achieve his incredibly high potential because of that. Does not seem to deal well with adversity. Maybe just a product of immaturity? Could really benefit from a year in college under a respected and strong-minded coach that will challenge him, but there are major question marks if he can get eligible due to the controversy surrounding his high school. Only time will tell, but may be too talented to pass up at the very top of the 2018 NBA Draft regardless.

NCAA schools we contacted who are recruiting him do not seem overly concerned by these allegations made by his head coach, and told us they will continue to do so, speculating the club may have had an inkling that he will elect to go to college, and that they were hoping this account they opened would prevent him from doing so.

Outlook: Much improved Brazilian center who was brought to Spain when he was 13 years old. An interesting long-term project without a doubt. Not awkward or goofy like many young 7-footers his age. Has a lot of things you can't teach. Reportedly has made massive strides in the past year or two. Very productive at the junior level. Named MVP of the prestigious L'Hospitalet Euroleague junior tournament last month. Had his moments at this camp, even if he's obviously still a long ways away from reaching his full potential. Absolutely worth tracking to see how he continues to progress.

Strengths:
-Has strong physical attributes, standing around 6'10, with very long arms (reportedly 7'4 wingspan), big hands and a tremendous frame.
-Moves well for his size
-Very well coached big man. Skilled and competitive
-Shows really nice footwork inside the post and soft touch with back to the basket. Uses crafty spin-moves and pivots.
-Has potential as a long-range shooter. Good mechanics, follow-through and touch. Doesn't translate to games yet.
-Goes out of area for offensive rebounds
-Showed some timing as a shot-blocker
-Comes from a strong background. Moved to South Africa and received some very good coaching. Looked very focused during the camp. Seems to have a good feel for the game
-Played up a year (or even two) at this camp and didn't have a problem making his presence felt

Weaknesses:
-Maybe an inch or so undersized for the center position
-Good, not great athlete. Does not get off the ground that well with second bounce
-Struggled to translate his shooting prowess to the actual games. Does not shoot it consistently every time. Tends to fade unnecessarily and contort body sideways on release, leading to some long misses. Easy to clean up, but needs to be done.
-Hangs his head a bit when things don't go his way. Needs to continue to develop his killer instinct and play hard all the time

Outlook: Relatively unknown big man who just arrived in the US this past fall. Isn't getting much buzz in recruiting circles so far, but will undoubtedly emerge as a high-level college recruit. Has all the tools you look for in top-shelf center from a college perspective.
Read Next...