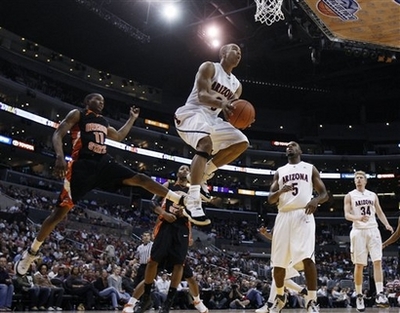 The first day of the PAC-ten tournament was quite an event in the NBA draft world. An unbelievable amount of teams showed up already for the 7-10 seed games, which is virtually unprecedented as far as past years are concerned. We saw at least eight general managers in attendance already, including Mark Warkentein (Denver), Bryan Colangelo (Toronto), Chris Wallace (Boston), Bernie Bickerstaff (Charlotte), Larry Harris (Milwaukee), Danny Ferry (Cleveland), Danny Ainge (Boston), Ed Stefanski (Philadelphia), and possibly othersnot to mention a horde of agents and sneaker company executives. The LA Times says that 26 of 30 NBA teams are represented here, and a total of 42 NBA people are here. In case youre wondering, this is the place to be as far as NBA talent is concerned

Ryan Anderson- Had a big game statistically with 22 points and 16 rebounds, but only shot 6 of 15 from the field. He showed a lot of versatility offensively as usually, putting the ball on the floor nicely, showing his outside shot, battling with mixed results in the post, and looking like a decent athlete in person. He does a lot of things for Cal, getting his hands on a lot of balls and showing a very good feel for how to maximize his tools, particularly on the glass. The downside is that he seems to be allowing himself to do some things offensively that he may not have tried previously, taking bad shots, and thus shooting lower percentages. He lacks the explosiveness to play inside the paint as much as Cal wants him to, and this was against some very poor competition as Washington was without Jon Brockman. Defensively, he doesn't make much of an impact. He showed some character (after disappearing in a few of Cals close games the past month or so) by hitting a huge shot with about 30 seconds to go and 2 seconds left on the shot clock on an inbounds play, draining an 18 footer at the buzzer to put Cal up four and win the game. NBA people we talked to are saying mixed things about him. He could be a mid to late first round pick, but could also go in the second round if a lot of underclassmen declare.


Devon Hardin- Came off the bench, as he was injured the week before and is still probably working himself into optimal game shape. Offensively, he isnt much of a factor in Cals game plan as far as touches are concerned, which is probably a good thing. He does not does establish position in the post very aggressively, and when he does receive the ball, showed very little touch or footwork.

With that said, you cannot ignore the impact his physical tools make on the glass and inside the paint defensively, and he indeed came up with 8 rebounds in 20 minutes. His body and athleticism are really impressive in person. He could have made his presence felt even more as a weak-side shot blocker, as his timing and reflexes are just not there, at least not consistently. Were not sure this season has been exactly what he envisioned when he passed up Detroits offer to take him in first round (he is rumored to have been in and out of Ben Braun's doghouse all season, while his minutes have been inconsistent) as hes probably in the same exact spot he was last June, but he has a chance to help himself with a big game against Cal today.

Quincy Pondexter- Showed a pulse for the first time in a long time, with a 23 point, 9 rebound game that kept UW in the game for the most part. He used his athleticism to make plays all over the floor, mostly by beating guys off the dribble with his left hand, but also by playing inside. He was a big mismatch at the four spot with his excellent quickness and long arms, looking very aggressive and confident today. Thats hopefully a good sign going into next year after he lost so much of his shine over the past 14 months. He needs to improve his shot-selection and overall decision making, as well as polish up his entire skill-set, particularly his perimeter shooting.

Arizona- Arizona absolutely pummeled Oregon State in the second game, jumping out to a 59-21 lead in the first half, which essentially killed any interest anyone had in watching this debacle. Well wait to draw some more conclusions after the quarterfinals, but we have to note how impressive Jerryd Bayless looks in personhes so incredibly smooth and fluid with the ball in his hands, showing a great court demeanor, never forcing a thing, and even though he can only go right with the ball, and everyone knows that, still manages to do basically anything he wants on the court. His talent is simply off the charts.

Donte Greene- Greenes performance (17 points, 5 rebounds, 4 assists, 5-18 shooting) in Syracuses opening game exit from the Big East tournament was a microcosm of his entire freshman season: up-and-down play with flashes of great shooting ability and struggles with his dribble-drive game. Greene shot well from behind the arc, hitting 4-for-9 of his three-pointers, with only one or two shots that could be labeled as questionable. Syracuse got off to a decent lead early behind his hot shooting, but he cooled off after hitting three of his first four from deep. Greene also hit a very nice contested pull-up 12 footer off the glass in the first half, though struggled on all of his other forays with the basketball, not showing the handle to create good shots in or around the painted area, shooting a woeful 1-for-9 on two-point attempts. Greene did show off some good passing ability and court vision in the game, dishing out four assists, and also made some impact plays on defense, where he played a solid game overall. With this loss, Syracuse will most likely not be invited to the NCAA tournament, which should provide Greene with even more reason to return for his sophomore year, where he could try to develop a more well-rounded game and play with more consistency.

Joe Alexander- Had a very good game leading West Virginia past Providence in the first round of the Big East Tournament, playing all 40 minutes and scoring 22 points on 8-for-17 from the field. Alexander filled his typical niche well, getting off his jump shot in various ways, be it turning around in the post, pulling up off the dribble, or spotting up from the mid-range. He shows excellent elevation on his jumpers and gets off a lot of contested shots while not forcing the issue, but he still isnt consistent from behind the arc (though he did hit a very nice buzzer-beater to close the first half). Also played very good defense throughout, matching up with point guards to power forwards at times due to switches, and always held his own with his athleticism and size. Showed very nice passing out of the post as well, dishing out four assists hitting cutters and open shooters. Still could use some more polish, specifically with his ball-handling and range, so hes probably best off waiting a year on the draft, though he could be in lottery discussions next year if he improves as much as he did this year.

Jason Thompson-
We got a nice chance these past few days to take in three consecutive games of Jason Thompson as his team advanced all the way to the finals of the MAAC tournament, where they lost to Siena. That probably makes a good dozen times weve watched him in the past couple of years, but still, its hard to really get an accurate gauge of the type of prospect hell be in the NBA. Most of that has to do with the incredibly poor level of play the low-major MAAC is known for. Thompson had one average game in the first round against Canisius (a terrible team even for the Metro Atlantic), saddled by foul trouble, one terrific game against Marist (whos coach shockingly decided not to double him even once), and one lackluster game in the finals against Siena, where he absolutely ran out of gas in the second half.

What he showed was a real mixed bag of strengths and weaknesses-- some very nice pivot moves and touch in the post, almost unopposed against JV-type defenses, the ability to handle the ball semi-well in the open floor, and a jump-shot with range that extends out the NCAA 3-point line (even if he air-balled one attempt badly). At the same time, he played little to no defense, lost his focus and failed to box out his opponents for rebounds on some key possessions, and showed an all-around awareness, toughness and basketball IQ that leaves a lot to be desired. At times he seems too comfortable just blending in, not appearing to be very comfortable trying to dominate his weak opponents, and being all too happy being the nice guy who feeds his teammates on the perimeter rather than trying to help his team by carrying them offensively.

Still, you cant ignore the fact that hes 6-11, with a good frame, solid mobility, long arms, some very versatile skills, the ability to operate in the high post, and seemingly a nice amount of upside that he has yet to tap into. Once you get outside the top-15 or 20 picks or so in the draft, there are not many guys you can still say that about. Even if hes only a Mark Blount-style backup, that still has some value.

Many teams are going to want to work him out at the end of the day, and well probably learn a lot more watching him in the pre-draft camp against legitimate high-major big menif he decides to show up.
Read Next...