Joey Whelan
@DraftExpress
Rucker Park has always been synonymous with exciting, crowd pleasing basketball. The high flying, fast paced brand of basketball played there is as much a part of the culture at Rucker as the court itself is to downtown Harlem. The arrival of twenty-four of the countrys best high school players on Friday night for the Boost Mobile Elite 24 Hoops Classic made for another electrifying night at the famed park. DraftExpress was in attendance as the Goat Squad came away with a 169-164 victory over the Skip To My Lou Squad.

The Elite 24 differs tremendously from all other high school All-American showcases in that it is played on an outdoor court with baskets that have been worn down from years of use and exposure to the elements. These conditions make for a completely different kind of game than many of these players are used to. From the opening tip, to the final buzzer, the game was played at a furious up and down pace. The few possessions that slowed to a half court set turned into one-on-one battles where players would try to out perform each other, much to the delight of the crowd.

Though the game included a long list of players with tremendous shooting prowess, the condition of the baskets discouraged much perimeter shooting; most players opted to take the ball to the basket. The fast pace favored some players tremendously, while others who had dominated in half court settings against similar competition, struggled at the Elite 24.

Here are some scouting reports of some of the most intriguing players that participated in Fridays game.

The Oak Hill Academy senior continued to dominate the summer circuit, putting together a brilliant performance in winning co-MVP honors for the second straight year at the Elite 24. Jennings posted 19 points, 7 rebounds and an Elite 24 record 23 assists.

The high-speed pace of play favored Jennings tremendously, who gets up and down the floor with the basketball faster than most players do without. His court vision is off the charts as exemplified by the continuous no-look alley oops that he lofted on target to streaking teammates. A true point guard in every sense of the term, Jennings also recognized when he should take over offensively and score himself. He has great ball-handling skills and a blazing first step, which allowed him to penetrate into the lane with great ease against very stiff competition. Once in the lane, he combined fantastic touch off the glass with a real knack for using his body to shield the ball. He was able to knock down a couple of outside shots, but like most players, chose to take the ball to the basket more often than not.

Jennings is going to be a perfect fit for Lute Olson and the Wildcats with the non-stop up-tempo offense. The thought of Jennings running the show with a lot of firepower around him should be enough to make other Pac-10 teams nervous.

Riek was probably the most intriguing prospect at the Elite 24. A legit seven-footer with a massive wingspan, Riek has been impressing scouts all summer long with his performances against top competition. Despite this, Riek had probably his worst showing of the summer on Friday, and many of his weaknesses were exposed.

The fast pace of the game did not favor Riek at all, as he is obviously better suited to play in half court setting. His conditioning, which has been questioned at times, proved to be poor, as the big man ran out of steam quickly. Once his energy ran out, Riek proved to be completely ineffective on both ends of the floor. Offensively it was clear that Riek was tired as he had trouble holding his position on the block, and defensively, he had trouble keeping up with some of the quicker players.

Clearly Riek is a talented player with a tremendous amount of potential, but Friday nights game did not cater at all to his style of play.

Rick Pitino is getting himself a low-post force next year in Samuels, who is one of the strongest players in the country and showed it on Friday night. Every time the big man from New Jersey touched the ball on the block, he either drew a foul or threw down a thunderous dunk. 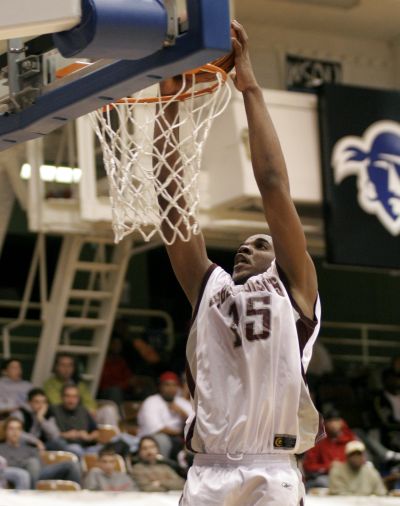 Samuels did a fantastic job getting position on the block and finding his way to the basket once he was fed. Where he runs into trouble is his lack of overall athleticism and explosiveness. Often times, Samuels was forced to alter his shot or give an added head fake, since he lacks a stellar vertical jump.

He ran the floor very well, often beating the defense down the floor for an easy basket. What really impressed about Samuels was his soft touch around the basket. He clearly has a good feel for playing with his back to the basket, which will help tremendously when matching up against taller defenders.

Defensively, Samuels was by far the best rebounder in the contest. He does a great job at getting position, and once he has a man, sealed him very hard to get over or around him because of his massive frame.

Easily one of the most athletic players on the court Friday night, DeRozan showed off an array of high flying dunks on his way to 26 points. DeRozan, who is a deadly perimeter shooter, didnt show off much from beyond the arc as a result of the sub par conditions of the baskets.

What DeRozan did show was solid ball-handling skills and a great first step getting to the basket. He was also on the receiving end of plenty of stellar passes from teammate Brandon Jennings. The USC bound guard also has tremendous leaping ability, often skying for acrobatic dunks without seemingly putting forth much effort.

The future Buckeye may have been the most impressive player at the Elite 24. Mullens fully exhibited his freakish athleticism with a flurry of put backs and dunks, including a one handed alley-oop that was caught a good two feet about the rim.

Mullens has all the tools of an NBA big man. He has a very soft touch and a nose for the basket. He was very aggressive on the offensive glass, picking up plenty of put back baskets thanks to his ability to elevate over defenders. He runs the floor well for his size and shows a very good feel for the game.

Though he has the ability to play out on the perimeter and shoot from the outside, Mullens stayed primarily on the block throughout the game. He did have one nice drive to the basket after catching the ball near the top of the key.

Defensively, Mullens played solidly, blocking a couple of shots and altering a few more from his interior position.

Stephenson was clearly the hometown favorite in this contest, receiving plenty of backing from the crowd on hand. He didnt disappoint. The rising junior was co-MVP of his team, scoring an Elite 24 record 38 points. Stephenson showed his full array of offensive talents in hitting the record mark.

In the first half, Stephenson attacked the basket with a fury, beating any and all defenders off the dribble and showing great touch around the hoop. In the second half he showed off his stellar shooting abilities, knocking down several shots from beyond the arc, the only player to do so consistently throughout the game.

The one criticism of Stephenson, which has been noted before, is he sometimes tries to do too much on his own, often forcing up tough shots. He did record 4 assists in the game, but most of those were on easy fast break attempts.
Read Next...