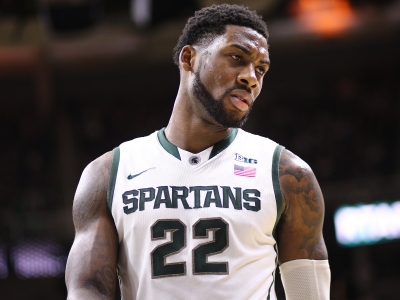 A player we've written about in our Big Ten preseason coverage each of the last three years, Michigan State senior Branden Dawson saw his college career come to an end at the hands of the eventual National Champion Duke Blue Devils in the 2015 Final Four. Never making the transition to the perimeter, Dawson's scouting report reads similar to how it read after he bounced back from ACL surgery as a sophomore.

As has been the case throughout his career, Dawson's intrigue starts with his tremendous athleticism. He's a powerful athlete with good speed, strength, and outstanding explosiveness off of two feet. With some 20% of his possessions coming in transition, where he shot 75% as a finisher according to Synergy Sports Technology, he's a highlight waiting to happen when he finds a lane to the rim, especially in the open floor.

His physical profile also translates nicely to the defensive end, where he was terrific at times defending multiple positions at the college level en route to earning Big Ten All-Defensive Team honors as a senior. Dawson was one of 11 players to average over 25 minutes per game last season and record 2 blocks and 1.5 steals per-40 minutes pace adjusted. He'll need to be a bit more physical than he already is on the block to make up for his lack of size in the pros, but has a chance to be a very good defender at the next level offering similar versatility on both the perimeter and interior.

Exhibiting the same trademark grit that has become common among Michigan State big men during Tom Izzo's tenure, Dawson is also a terrific rebounder, ranking 13th in offensive rebounding and 8th in defensive rebounds per-40 minutes pace adjusted among players in our top-100.

The issue with projecting Dawson to the next level, as has been the case for some time now, is his lack of offensive skills, particularly on the perimeter. Pegged, perhaps unfairly, as a small forward by some early in his career--due to his lack of height, Dawson was 0-9 from three over the course of his college career and went 11-40 from the midrange as a senior, while shooting a career low 49% from the line this season. He has yet to develop the shooting touch that would allow him to slide over to the small forward position (offensively) for extended stretches.

Dawson isn't entirely inept offensively. He's a terrific finisher who can attack the basket in a straight line when given a lane and make use of his physical tools going one-on-one in the post. The Gary, Indiana native isn't a liability with the ball in his hands as his 1.7 assists per-40 minutes pace adjusted isn't anything special, but it ranks 4th among power forward prospects in our top 100. His lack of polish on the block limits him against collapsing defenses and longer, comparably athletic players, but he flashes some ability from the post attacking the middle of the lane for jump shots and spinning to score baseline on his best nights.

Dawson is a player who, when engaged, was a difference maker at the college level, as his inclusion on the All-Big 10 2nd Team suggests. Looking ahead, Dawson's lack of improvement on the perimeter coupled with his short stature for a power forward will give team's pause, but his excellent toughness, defensive potential, and rebounding ability will earn him plenty of workouts and it wouldn't be entirely surprising to see a team draft him in the hopes he emerges as a Renaldo Balkman or Mike Harris style energy guy down the road.
Read Next...