Brandon Jennings to Europe, Which Europe? 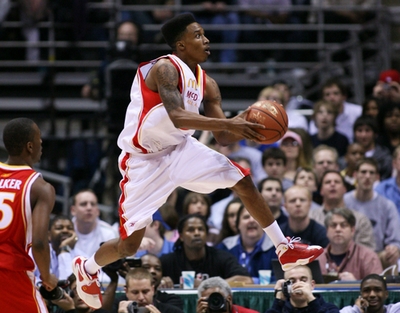 Luis Fernández
@DraftExpress
Widely spread news by now, one of the very top high school players, Brandon Jennings, is looking to join a European team for the following season. Its not only a pioneer move (concerning highly touted recruits), but also could unfold some serious consequences in the future.

We've heard that there are much bigger reasons for Jennings deciding to go overseas than meet the eye, but will stick to the facts for now until more light is shed on the rumors that abound at the moment. 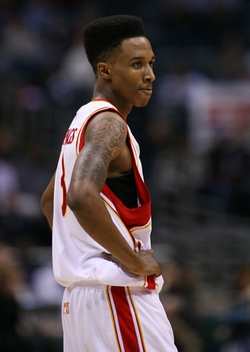 At this point, anything that happens to Jennings will be scrutinized and used as an example for others in the future. His failure could very well close this newly opened path; his success might dangerously open a flood of teenagers looking for a paycheck, since they cant get into the NBA, especially if the 20-year old age limit is dictated.

However, any attempt to draw simplistic conclusions is bound to lead to wrong decisions.

First and foremost, we have to understand that Europe is a huge mass of different basketball competitions, with some of them hardly resembling each other. This is not like playing in the NBA, where there are 30 defined teams and a comparable level between them. Overseas, there are some incredibly competitive leagues and some easier ones, balanced and unbalanced, defensive oriented and scoring happy, with an intense tactical approach and more free styled, better leagues and worse leagues, with a huge gap between them.

So its not simply about going to Europe and collecting your pay check, but you have to make the right choice. And Jennings, as good as he might be, will have to as well.

We all know the kid, oozing with talent, blessed with excellent athleticism, ball-handling skills, very nice shooting touch and passing ability. It has been a piece of cake for him to disrupt opposing defenses at the high school level, either playing against mediocre teams or in all-star type settings.

But this is completely different, as he will face tougher, stronger, bigger, more experienced and much more organized defenses (on a different degree depending on where hes headed to). A teenager, lacking strength and without any real knowledge of how to run a motion offense (the staple of European basketball), a dominant ball-handler who has never been asked to play any type of real defense or execute in high pressure situationscould really struggle to adapt in such a short time-frame.

It would likely be a big mistake for Jennings to put himself into an excessively demanding environment. A high profile team (like Euroleague outfit Rome- who are rumored to be strongly in the picture) usually enjoy a deep roster and a very structured game on both ends of the court. There are no one-man shows here, the ball needs to flow and the team works united for a purpose. A player like Jennings, who loves to jack up shots and to dribble looking for the final definitive pass, probably doesnt enjoy the experience and maturity to adjust quickly enough. Playing in a top league, you need to be extremely mature and consistently effective in order to enjoy significant freedom within the system, certainly not the easiest task for such a young kid playing the point guard position.

Every loss in Europe is treated like a tragedy for the entire week until the teams suit up againcertainly a far cry from the AAU type settings Jennings is accustomed to where teams often dont even have to wait for more than a few hours before forgetting everything and hitting the court again. 2-3 consecutive losses in Europe usually lead to a variety of reactions coming from sponsors, the front office and the often incredibly negative mediacausing the coachs seat to heat up, the paychecks to arrive a little bit later (or not at all), and even players getting cut for imaginary breach of contracts.

So if he doesnt fit, he could easily end up relegated to the bench, regardless of being perhaps the most talented player on the roster, a dreadful scenario heading into the draft.

For a guy like him, who comes to the Old Continent just en-route to a quick exit to the NBA, its all about being on the court and able to display his abilities. Forget about learning the nuances of a highly structured basketball system in depth. If you think hes coming back in a year looking like a cross between Stephon Marbury and Theo Papaloukas (the Greek guy who killed the US Team at the 2006 Worlds schooling them on the pick-and-roll), youre very wrong. If he were willing to do it, which is not happening, it would take him significant time and would put his draft stock in serious danger.

Going just by leagues, the Spanish ACB, for example, mentioned by Jennings as a country-name he happens to be familiar with, would likely be the worst possible choice.

The strongest domestic competition in Europe, its very deep and extremely competitive. Without huge differences between the top teams and the bottom, theres a bunch of legit title candidates, while you usually have close to half of the squads battling not to get demoted, so theres high pressure and little patience. For a mid-sized team, a few bad games might mean to find yourself out of the playoffs and fighting for your life. Besides, theres not much up-tempo basketball, just two Americans are allowed per team (often playing marginal roles), deep benches, and the game is usually highly structured. Just take into account that college graduate rookies rarely succeed in the ACB, and it even takes significant time to adapt for those coming or returning from the NBA. Its nearly impossible to see a team in this league putting their fate in the hands of an American teenager.

The Italian league is another spot mentioned as a place Jennings would considerRome (the clear-cut second best team) seems to be looking strongly at him right now. This is a very physical league where strength and mental toughness is at a premium, two things a player like Jennings cannot be expected to bring to the table at this point in his career. A smaller team in first division may be able to offer him shelter here playing alongside an experienced American guard, but most of the usual suspects you would consider expressed very little interest to us when asked about this possibility. The option of playing in the Italian second division (still a fairly strong league by European standards) might be even more attractive, as there are only two Americans here (and one European) and there should be more patience to be found in a setting like this.

On the bright side for a player like Jennings, France is an interesting league. Although showing good parity considering the relatively small differences between the best and worst teams, you will find a lot more freedom, up-tempo basketball and guard-oriented style, with many fast and athletic players, not much size and not showing the most tactical emphasis around. Financially, mid-level teams can offer between 100-150 thousand dollars (but often closer to 80 or 90k)nowhere near the 300-800 thousand his people have been mentioned as looking for.

Israel is another attractive choice. Although Hapoel Holon pulled a shocker this past season, this is a league tyrannized by Maccabi Tel Aviv, so the pressure to perform from day one is not that big. Here you can find some of the highest scores in Europe, as theres more of a laid back attitude on the game style, and off-court demands. Besides, Americans seems to adapt pretty fast here, finding a friendly environment and many countrymen sharing their teams within a very small radius. The budgets here outside of Maccabi are even smaller than in Francethink 80 to 120k.

Another good showcase (thats the main point, after all) could be Turkey, especially out of the top 5 or 6 teams, where high scores are a regular fit, players enjoy extended minutes on the court, helping them to engross their stat-lines, and Americans dominate the statistical rankings. The money here flows much more freely than in most other leagues these days, even if teams regularly overspend their budget and are then forced to release players midway through the season (or just not pay them their final monthly salaries). The language and cultural barriers are high, though, and the turnover amongst teams is fairly significant.

Considering how much his stock and future career will depend on this upcoming season, Jennings would be smart leaving money on the table if needed in order to find the most proper league and team to showcase his abilities. Neither to play the Euroleague should be a priority for him: he doesnt particularly need that exposure because teams will go to scout him wherever he plays.

Other kids thinking about following Jennings steps will have to carefully examine the circumstances of Brandons success or failure. Will he prove that Europe is a viable option for high-school graduate players? Will he succeed because of the setting where hes playing in? Will he fail because he didnt choose the right situation? Does he enjoy or lack some certain ability or mental characteristic that allows or hinders him to adjust to a given European environment?

Just think about the learning curve of NBA teams when drafting international players. They would take almost any seven-footer with potential following Nowitzkis success, and of course it doesnt work that way. For the same reason, the fact that Jennings succeeds or fails is not enough reason for any other top high school kid doing the same in any European team. Different players and different environments require different analysis.

Its a complex world out there.
Read Next...