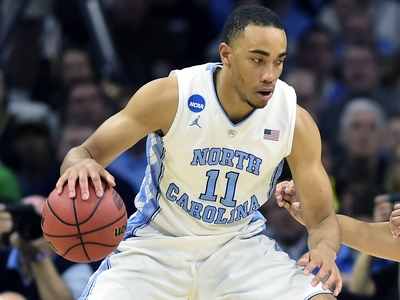 Coming off a solid junior season that saw him take home All-ACC Third Team honors, North Carolina's Brice Johnson emerged in a huge way as one of the most productive big men in the country as a senior. Taking a significant step forward in his development averaging 17 points and 10.5 rebounds per game while helping guide the Tar Heels to a National Championship appearance, Johnson solidified his standing as one of the top NBA prospects in the senior class and a potential first round pick.


Johnson's NBA potential, as it has throughout his entire career, starts with his sensational athleticism, even if he's a bit of a mixed bag from a physical standpoint. At 6'9 with a 6'11 wingspan Johnson lacks great length for his height, and even though he's added some 40 pounds to his frame since his high school days, remains fairly skinny. The South Carolina native does not have outstanding size, but he is, without question, an outstanding athlete. A bouncy interior player with good speed, impressive fluidity, and the type of elite leaping ability that allows him to play above the rim with absolute ease, Johnson's explosiveness is his clear calling card as a prospect.

Putting his athletic merits to good use on the offensive end, Johnson did most of his damage this season as a finisher, primarily off of cuts, put backs, and fast breaks as his effort, instincts, and explosiveness frequently paid off inside. He also saw touches consistently one-on-one in the post as he created some 30% of his offense himself operating on the block according to Synergy Sports Technology. He ended the season ranked eighth in the country in points per possession among the 267 Division I players who used over 500 total possessions. Upping his scoring rate from 19.7 points per 40-minutes pace adjusted as a junior to 25 as a senior, Johnson took on and excelled in a bigger role emerging as the first option on a balanced Tar Heel squad that looked far better on offense some nights than others.

When the Tar Heel offense was rolling, Johnson was one of the primary beneficiaries, as he was one of the most efficiency scorers in the country converting shots created for him. Finishing at an outrageous 83% clip in transition and a markedly improved 69% in the half court, up from 64% a year ago, Johnson's ability to convert lobs, dump-off passes, and create easy shots for himself on the glass stood out at times. A highlight waiting to happen, Johnson seems like the type of athletic big man who could contribute at the next level with his hustle on the glass and athleticism off the ball, especially if he's paired with a dynamic, shot creating guard.

On top of his ability to finish, Johnson's athleticism also translates fairly well to the post. Lacking great bulk, he isn't adept at establishing deep position inside, but he has solid footwork and though his repertoire is a bit predictable, his ability to elevate often allows him to get his shot off when well defended. Making quick, decisive moves on the block, Johnson makes hook shots at the nice rate over his left shoulder and has fairly solid touch on his turnaround jump shot over his right, but will also use aggressive drop steps to get to the baseline where he tries, and sometimes succeeds to score from difficult angles jumping from behind the rim. Johnson doesn't tend to use many counter-moves, leading to some tough shots when the defense anticipates his first move correctly, but the senior shot a very respectable 48% operating one-on-one on the block nonetheless, thanks to his ability to use his athleticism to shed his defender or rise up and score over him at the college level.

Doing the vast majority of his scoring inside, it will be interesting to see how Johnson's offensive game develops in the coming years. His lack of strength may prove more problematic at the NBA level than it did in the college game, and though he only made 36% of the 44 shots he took outside of 12 feet last season, he seems to have some potential as a mid-range weapon. Shooting 78% at the line and making spinning jump shots out of the post at a nice rate, Johnson's form is a bit rigid at times, but his mechanics are fairly consistent and he looked comfortable from the midrange at times when spotting up, leaving some room for optimism that he may become a threat to space the floor a bit and do some damage away from the rim.


Johnson was a very effective scorer and offensive rebounder this season, but the rest of his skill set, like his jump shot, appeared to be a work in progress, as he lacks a degree of versatility. He is a decent interior passer but isn't going to provide much value as a playmaker, and though he can attack slower big men off the bounce, he often plays too quick for his own good when looking to slash the rim. He does a nice job on the offensive boards and rebounding the ball in general, but hasn't been overwhelmingly productive in that regard. Nonetheless, the soon to be 22-year old power forward has a number of tools that could help him find a niche offensively on the right team in his career.

Defensively, Johnson averaged a fairly impressive 2.1 blocks and 1.5 steals per-40 minutes pace adjusted, but digging deeper, has a lot of room to grow on this end. He struggled with foul trouble on a number of notable occasions, still lacking a degree of discipline, awareness and feel inside. More than athletic enough to hold his own defensively at the college level, Johnson had some nice moments using his leaping ability rotating over to the weak side to protect the rim, but also struggled at times, notably with lapses biting on fakes on the perimeter or getting out of position in the pick and roll.

Johnson doesn't always make the most of his quickness pressuring the ball away from the basket and his lack of lower body strength limited him in the post against some players as well. Looking lost, unfocused or disinterested some possessions, Johnson has to tools to be more of a consistent presence on this end, and it will be interesting to see how he progresses as a defensive player at the pro level.

An emotional player who absolutely came into his own as a senior, there's a lot to like about Johnson as a prospect. Despite his experience, he still has some things to iron out and has some upside, which is saying something given that he was one of the most impactful players in all of college basketball some nights last season. Johnson figures to be in a mix to hear his name called in the first round come draft day, and is a name to keep an eye on throughout the coming months as he sits right in the middle of what has become a very intriguing power forward class.
Read Next...