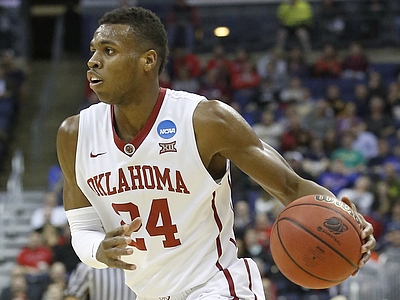 Jonathan Givony
@DraftExpress
This article was originally published on the Vertical on March 29th. Find it here in it's original format.

NBA teams have watched the best NCAA players and NBA prospects see their college careers end in disappointing fashion in the NCAA tournament.

Big Ten Player of the Year Denzel Valentine of Michigan State lost in the first round, scoring 13 points on 13 shots in a shocking loss to No. 15 seed Middle Tennessee State.

Utah's Jakob Poeltl, the Pac-12 Player of the Year, had a season-low five points on five shots in a disappointing blowout loss to Gonzaga in the second round.

ACC Player of the Year Malcolm Brogdon scored 12 points on 14 shots and came up completely flat in the second half as Virginia was the victim of a stunning comeback by Syracuse in the Elite Eight.

Kentucky's Jamal Murray, a projected top-10 pick, needed 18 shots to get 16 points in a second-round loss to Indiana.

Possible top-five pick Jaylen Brown of Cal fouled out in just 17 minutes after scoring four points on six field-goal attempts in a first-round loss to Hawaii.

Yet Buddy Hield is still standing after averaging 29 points per game while making 19 of 40 3-point attempts and leading Oklahoma to the Final Four, where it will face Villanova on Saturday.

Most observers think Hield's NCAA tournament performance is dramatically boosting his draft stock, but that may not be the case.

It's nothing we didn't know or haven't seen already, but it's good to see him doing this on the biggest stage he's played on in his college career so far, an NBA general manager told The Vertical.

Hield's evolution from a raw and wild freshman who averaged 7.8 points per game and shot 24 percent from 3-point range to the best player in college basketball is an incredible story of work ethic, character and determination. He was hoping to enter last year's draft, but was deterred by the feedback he received from NBA teams, which indicated he was, at best, a mid-second-round pick. Now he is expected to be drafted in the lottery in June and may have solidified his standing in the 5-10 range.

But it's important not to go overboard with his NCAA tournament play. As we've seen in the past, strong tournament performances don't always translate into great NBA careers. After all, Tyus Jones, Shabazz Napier, Luke Hancock, Kyle Singler and Wayne Ellington are five of the last seven players to be named Final Four Most Outstanding Player.

The difference between those five and the other two winners of the award  Anthony Davis and Kemba Walker  is that like Hield, Davis and Walker had already cemented themselves as lottery picks before the tournament.

Today's NBA leans toward bigger wings who can defend multiple positions, create for themselves and others, and stretch the floor beyond the 3-point line. Hield can do the most important of those three things  shoot  but falls short in the other two areas. At 6-foot-4½ in shoes, he'll likely defend mostly shooting guards, and his passing metrics rate as the third-worst (ahead of only Brown and Indiana's Troy Williams) among the 45 college guards or wings in the DraftExpress Top-100 rankings.

Still, that shouldn't prevent him from having a long and productive NBA career because almost every team in the league could use someone in his mold. In what appears to be a fairly weak draft, there's a comfort level in knowing exactly what you're getting with Hield.

Here's a look at some comparable college seasons produced by guards selected in the draft since 1983:

Hield's NCAA tournament run should be celebrated and enjoyed by basketball fans. His matchup on Saturday night against Villanova is a must-watch game for most who follow sports, but don't be surprised that NBA general managers are just as likely to be roaming around gyms in Serbia or France while it's happening.
Read Next...