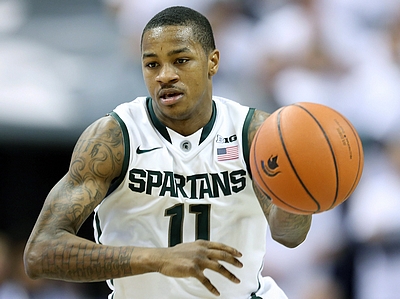 A right wrist injury caused Keith Appling to miss three games in February, but he was able to return and lead Michigan State to the second weekend of the NCAA tournament for the third consecutive year. While the injury seemed to hamper Appling's point production, it did allow him to put his point guard skills on display throughout the year. 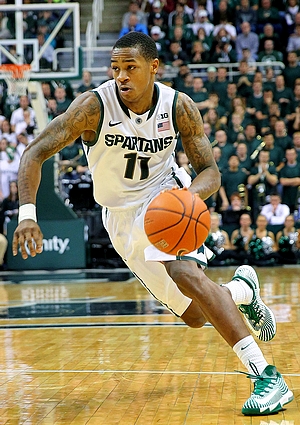 Appling's usage rate decreased from 23.5% in his junior year to 20.5% his senior season, as Tom Izzo clearly instructed his point guard to play more of a facilitating role. His lower usage allowed him to improve his offensive efficiency, as his TS% rose from a mediocre 52% as a junior to a much more solid 56% as a senior. His 49.5% 2-point percentage and 37% 3-point percentage aren't anything to write home about, particularly considering his struggles at the free throw line (66%), but this was the most efficient season he's had since he was a freshman.

Appling's increased focus on distributing allowed him to average by far the highest PPR and assist to turnover ratio of his career, both of which rank third among Top-100 prospect point guards.

Appling has decent physical tools for a NBA point guard, standing 6-2 with good athleticism. While he doesn't always show it, he has excellent speed in the open floor and can finish impressively above the rim with a head of steam, but he never really mastered utilizing these tools consistently at the college level. While his average size and frame won't help his cause among NBA decision makers, they shouldn't eliminate him from the conversation at the same time.

On offense, Appling showed he was capable of running a team by initiating the offense and distributing the ball to his teammates, both in transition and in the half court. He never quite looked all that comfortable running Tom Izzo's conservative offense in his time at Michigan State, but he certainly made strides as his career moved on, particularly by cutting down on turnovers thanks to playing more under control, relative to his prior seasons. He played a relatively minimal role in the half-court for Michigan State at times, though, as the biggest share of his offense came in the open floor, and it didn't always seem like he was trusted to be the main facilitator once the game slowed down.

He played off the ball quite a bit throughout his career, which helped him develop his outside shooting somewhat, something that was previously a major weakness, hitting an average 35% of his jump-shot attempts with his feet set, nonetheless an improvement over what he showed in the past.

In the pick and roll, Appling was useful breaking defenders down off the dribble but he will be handcuffed by his mediocre jump shot, which will allow the defense to go under the screen. He shot only 24% on 37 jump shots off the dribble, according to Synergy Sports. When he does get a head of steam, he is able to get to the rim, usually by splitting the defenders or with a nice inside out move to get around the defense. He makes good decisions out of ball screens, attacking when it is available and finding the open man when driving lanes are cut off, but his lack of in-between game makes him relatively easy to defend. NBA teams will also likely want to see him improve his ability to operate at different speeds and improvise better in the half-court.

He was very good at finishing at the rim according to Synergy Sports, shooting 60.6% on these attempts, making him one of the top guards in the Big 10 in this area. However, he doesn't draw much contact, as his 5.2 free throw attempts per 40 minutes pace adjusted were the second lowest among point guards in our top100. His average size and strength hampers him in this area.

While he can get to the rim out of ball screen actions, he wasn't as proficient in this area out of isolation sets. He had trouble breaking his defender down without the benefit of a screen, as bigger guards were able to cut off his dribble. These bigger players also forced him into difficult jump shots, as Appling struggled when shooting closely guarded jump shots, as his lack of elevation makes it easy for defenders to contest his shots.

Defensively, Appling may struggle at times against bigger guards, especially ones who can shoot over him. However, he has decent strength to not allow himself to be backed down and has great lateral quickness, keeping ball handlers in front of him. He can cut off penetration and puts great pressure on the ball.

Appling's value lies in his ability to play solid defense, not make mistakes, and score occasionally in transition. He shows solid potential as a backup point guard, although it will be interesting to see if the faster pace of the NBA helps him break out of the often vanilla style of play he mostly showcased under Tom Izzo. While an improved jump shot will raise his ceiling as a player, Appling could carve out a nice role in the league by playing to his strengths, being a steady ball-handler and continuing to distribute the ball to his teammates while leading a second unit.
Read Next...