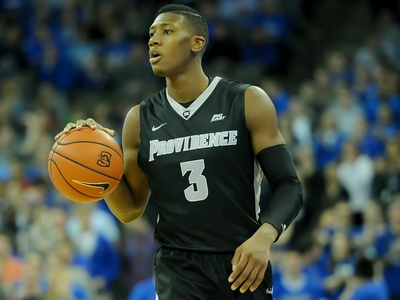 There are some college basketball players who require some nuance in figuring out why they're NBA prospects. A diverse skill level that may not show up right away, an incredible understanding of the game that requires some time before it's really appreciated, a specific role they have to be placed into in order to really have their gifts maximized to the extent that you can see them carving a role at the highest levels of basketball.

Providence junior Kris Dunn is not one of these prospects.

It takes little more than a few seconds of watching Dunn play before you realize why he has a bright future in the NBA. Dunn has an exceptional physical profile for a point guard in today's NBA, standing 6'4 in shoes, with a terrific frame, a long 6'9 wingspan, and elite quickness and leaping ability that place him in rarefied air by even NBA standards.

Dunn spent his first two seasons at Providence fighting off a series of injuries to his right shoulder that prevented his college career from taking off. Dunn tore the labrum in his right shoulder the summer before his freshman season at Providence, then injured the shoulder again in an exhibition prior to what would have been his sophomore year. Dunn tried to play through the injury initially, playing four games for the Friars before conducting season-ending surgery.

After breaking out in a big way in 2014-15, Dunn's progress for this season, classified his junior season after being granted a medical red shirt for the 2013-14 campaign, was much more incremental in nature. His scoring average rose slightly, from 18 points per 40 minutes pace adjusted to 19.6, his three-point shot rose from 35.1 percent to 37.2 percent, and his turnovers dropped, from coughing the ball up on 22.6 percent of his possessions to 18.8 percent, a figure still very much on the high side. His assist rate did drop as well, from assisting on 50 percent of his teammates field goals while on the floor in 2014-15 to 41.8 percent, although this is in large part due to the emergence of sophomore Kyron Cartwright as a secondary ball handler for the Friars, and the presence of Ben Bentil, who created a decent amount of his prolific offense on his own.

Dunn's athletic profile serves as the catalyst for much of his game, including in transition, which makes up just over 25 percent of his possessions, according to Synergy Sports Technology, despite the fact that Providence head coach Ed Cooley hasn't historically been known as an up-tempo coach. Dunn's elite ability to force turnovers  he averaged 3 steals per 40 minutes, pace adjusted, the top figure in our top-100 database  certainly helps in this regard. Dunn has elite quickness with the ball in his hands and an incredible burst, and he's relentless in attempting to use this to his advantage in the open court.

Another area where Dunn really uses his quickness to his advantage is off pick and rolls. Dunn changes gears very well, expertly lulling defenders to sleep with a couple of lazy dribbles before changing gears, and direction, and exploding to the hoop in a manner that's tough for defenders to stay in front of. Dunn complements this ability to attack the basketball off of pick and rolls with an ability to shoot off the dribble, and has excellent elevation on his jump shot, which allows him to get a clean look despite tight defensive pressure.

Dunn's overall numbers as a jump shooter have improved over the years, and based off numbers alone can be considered a strength of his, at least on paper. Dunn shot a career-best 37.2 percent from three-point range on the season, making just over one per contest, and shot 33 percent on jump shots off the dribble, a better-than-average rate. Still, watch Dunn play and the results are wildly inconsistent. At times, he'll make shots that fall effortlessly through the hoop; at other times, he'll miss, wildly, to the left or right, shooting airballs that make you wonder how much progress he's actually made on his shot. In terms of form, there's still quite a bit of extra motion in his shot, and his balance is questionable at times as well, with the plant, angle of jump, and landing seemingly changing from shot to shot, even when not under duress.

Dunn's other main area of concern is his propensity to turn the ball over. The optimist would say he lowered his turnovers from 4.8 turnovers per 40 minutes, pace adjusted, to 4.2. The pessimist would say that's still the worst number, by far, of any point guard projected to be drafted in our latest mock draft. The reasons for Dunn's turnovers are varied, from wild forays to the hoop, to an at-times loose dribble ripe for being stripped, to flat out poor decision making.

Providence is a team that has struggled from the perimeter during the two seasons Dunn served as a focal point, and this lack of spacing certainly provides some hope that Dunn could fix some of these issues at the next level. The spacing Dunn should have in the NBA, with the freedom of movement guards enjoy, the longer three-point line, and hopefully landing on a team with more consistent perimeter shooters are all factors that could help Dunn's style of play. Still, the questionable decision making is a legitimate concern for a 22-year old player who will have the ball in his hands as much as Dunn projects to.

One area where Dunn made progress this season was finishing at the hoop. His overall two-point field goal percentage was still very low, as he shot just 47.7 percent from two-point range on the season, but this was in large part due to how reliant he is on long two-point jump shots to carry the offensive burden he has been asked to at Providence. Dunn shot 58.1 percent on half court shots around the basket, according to Synergy Sports Technology, a significant improvement over the 46 percent he shot during 2014-15, as he did a much better job of using his elite explosiveness and body control to effectively finish around the basket.

While Dunn's decision making and carelessness with the ball still leave something to be desired, he possesses plus court vision, and knows how to use his athleticism and ability to create off the dribble to benefit his teammates, both shooters stationed in those ever-so-valuable corners and big men cutting off the ball.

Defensively, Dunn has elite physical tools, with the size, wingspan, and foot speed to be a lockdown defender when dialed in. Dunn tends to float off the ball, constantly in search of lazy passes for opportunities to force a steal and start a transition breakaway. This can certainly work  as we noted above, he has a prolific steal rate  but it leaves him out of position far too frequently, as he can be prone to being burned by back door cuts, lacks awareness in recognizing screens, and struggles to defend pick and rolls. Dunn's also prone to reaching more often than he should, picking up some entirely unnecessary fouls which limits his ability to stay on the floor. The potential is there, but his current consistency and effectiveness might be overstated if you just watched his highlights or saw his gaudy steal numbers.

Dunn's combination of elite physical tools, ability to get to the rim, both in transition and off the dribble, passing ability, and defensive upside gives him an immense amount of potential to tap into, and should land him very high in the lottery as a result. While his turnover rate and inconsistency in his jump shot are currently holding his game back somewhere, those are correctable flaws and there's regardless quite a bit of room for growth left as the game slows down for him with age and experience.
Read Next...