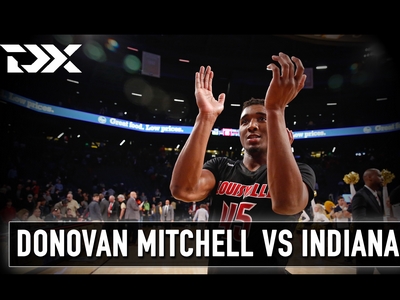 The 6'3 sophomore had arguably his best game at the college level, finishing with a very strong 25 points, 3 rebounds and 3 assists in 33 minutes, shooting 8-15 from the field and 5-6 from the free throw line.

Mitchell is having an inconsistent sophomore season, but has mixed in some very impressive performances like this game with strong outings against Notre Dame, Wichita State and Baylor to show NBA scouts the extent of his upside. Still, he's also struggled against some of the better defenses he's faced, such as Purdue, Kentucky and Virginia, combining to shoot 9 of 32 with 2 assists and 7 turnovers in those three contests.

On the season, Mitchell's numbers are mostly up across the board, as he's posting 18 points per-40 (up from 16), while averaging a stellar 3 steals per-40 (up from 1.8) as well. He continues to struggle to score the ball efficiently though, as he's shooting just 42% from 2-point range and 32% for 3. His 50% TS% is the fourth worst mark among all collegiate players in our Top-100 prospect rankings.

Louisville is 14-3 on the season and is currently 11th in the KenPom rankings.