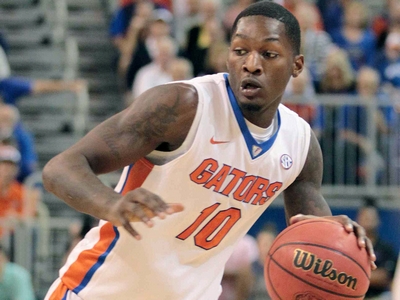 A player we've written about in some depth every season since his impressive freshman campaign at Virginia Tech, Florida senior Dorian Finney-Smith has continued his climb towards All-SEC 1st Team honors in his first season under Head Coach Michael White, solidifying himself as one of the top NBA forward prospects in this year's senior class. Averaging 15.1 points, 8.3 rebounds, and 2.3 assists per game, the Virginia native doesn't play a huge role offensively, but has been a consistent performer for the better part of two seasons, one of the reasons we're electing to evaluate him now.

Standing 6'8 with a 6'11 wingspan, Finney-Smith's size for the small forward position has long been one of his most appealing assets as a prospect. A consensus top-25 player in the high school class of 2011 coming out of I.C. Norcom High School in Portsmouth, Virginia, Finney-Smith is also a fluid athlete possessing good speed and leaping ability to go along with a 220-pound frame that's developed significantly over his 5 year college career. Though he remains on the lanky side and isn't overwhelming quick laterally, Finney-Smith possesses very solid physical tools for a small forward at the NBA level and even the potential to play the four in smaller lineups just as he does for the Gators.

On top of his ideal size, Finney-Smith has developed a skill set that lends itself well to filling a niche as a roleplayer at the next level and allows him to make a consistent contributions as the first-option on Florida team that doesn't have a polarizing focal point offensively. Finney-Smith's foremost offensive skill is his perimeter jump shot.

An erratic shooter early in his career, the turning point for Finney-Smith came after a very poor shooting performance late in his sophomore season when he was coming off the bench for the Gator squad that fell to eventual National Champion Connecticut in 2014. Shooting 3-21 from beyond the arc over his last 7 games that season, Finney-Smith clearly made an effort to improve his range. He has shot 42% from beyond the arc over his final two seasons in Gainesville.


With 45% of his field goal attempts in the half court coming on catch and shoot jump shots according to Synergy Sports Technology, Finney-Smith does most of his scoring with his set shot. Though his mechanics are a bit unorthodox as he gets little elevation and takes the ball further behind his head than most turning his release into a bit of a fling, it is difficult to argue with the results over the last two seasons even if his misses are ugly at times. The senior wasn't always a great shooter, and his 72% shooting from the foul line doesn't jump off the page, but his ability to stretch the floor is perhaps his most intriguing offensive skill from an NBA perspective.

More than just a set shooter, Finney-Smith also flashes the ability to attack closeouts and finish strong inside. Though he isn't very shifty with the ball in his hands and tends to be very right hand dominant dribbling the ball fairly high, he is comfortable using rangy strides to drive past slower or overaggressive defenders from the wing in the half court. Shooting 57% as a finisher, he isn't overwhelmingly proficient inside as he lacks blow-by quickness and struggles to score over length, but he can play above the rim and will and use both hands to convert reverse layups inside.

Though Finney-Smith is not a prolific shot creator and or comfortable pulling-up from the midrange off the bounce at this point, he does generate a bit of offense for himself, primarily with face-up jump shots on mid-post isolations, using his size and jump shot to his advantage. He is also adept at moving without the ball, whether he is getting up the floor and spotting up, taking the ball to the rim using simple crossovers and step-throughs in transition, or cutting to the rim when his defender goes to help in the half court, he does a nice job staying active. An unselfish passer who can make the simple play, Finney-Smith does a bit of everything offensively which should help him blend in nicely at the next level.

Aside from his ability to score, Finney-Smith makes his biggest impact crashing the boards. Averaging 10.6 rebounds per-40 minutes pace adjusted to rank 5th among the prospects in our top-100 that stand under 6'9, the fifth year senior does an very good job pursuing the ball off the rim on both ends for a small forward, using his length and timing to his advantage.

Defensively, Finney-Smith has nice tools for the next level, but is a bit of a mixed bag at this point. He flashes the ability to defend four positions effectively as the Gators switch liberally in the half court as their athleticism one-through-fives make them one of the nation's top defenses. Despite that, the senior struggles defending quicker players on the perimeter at times giving up more dribble penetration than one would hope and isn't entirely comfortable on the block against bigger, polished post scorers either. To his credit, he doesn't quit on plays when he's beat and comes up with his share of blocks and steals by virtue of his length.

Turning 23 in May, Finney-Smith may not have outstanding upside, but his size, versatility, and roleplayer potential will earn him plenty of workouts as he could be a candidate to fill the trendy 3 and D role if he can put everything together. An obvious invitee to participate in the Portsmouth Invitational Tournament in front of a hometown crowd, Finney-Smith could certainly be one of the players in their year's senior class to hear his name called on draft night.
Read Next...