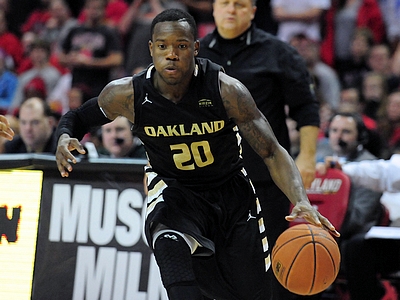 After finishing up a difficult out of conference schedule, which included matchups with the likes of Michigan State, Virginia, Washington and Georgia, now is likely an appropriate time to dissect the merits of Oakland junior point guard Kay Felder as a NBA Draft prospect.

Felder (then called Kahlil Felder rather than Kay) was considered a very important signing for Oakland, but only ended up there due to the lack of interest he garnered from high major conference head coaches. He was a decorated player out of Pershing high school, which produced numerous division one players (such as Michigan State point guard Keith Appling), but was deemed a low-major caliber recruit due to his lack of size, standing just 5'9 with a then very streaky jump-shot.

Felder has since developed into one of the best point guards in college basketball, averaging an outrageous 26.7 points and 8.7 assists per-40 minutes so far this season. Only one other college player (Jose Juan Barea) in the last 15+ seasons has managed to post similar numbers (26+ points, 8+ assists per-40).

While Felder clearly lacks adequate size for an NBA point guard prospect, he helps compensate for that in a number of different ways, as he sports a chiseled frame, possesses a long wingspan, and is a very good athlete to boot. He's capable of playing above the rim, sometimes in impressive fashion, has an impressive ability to operate at different speeds, including a notable extra gear, and makes it very difficult for defenses to stay in front of him due to his herky-jerky style of play, particularly in the open floor.

The key to Felder's success relies heavily on his perimeter shooting ability, which wasn't always the case earlier in his career. He is extremely proficient at shooting off the dribble in particular, creating excellent separation on his pull-ups, boasting a quick release to go along with excellent balance and footwork. Felder is the type of player who needs to be smothered at all times on the perimeter, as he is both incredibly aggressive looking for and making off the dribble 3-pointers, which puts incredible pressure on the defense, particularly early in the shot clock. Oakland plays at a very fast pace and Felder has the green light to operate as he sees fit, which makes them very entertaining to watch.

The threat of Felder's jump-shot opens up the rest of his offensive arsenal nicely. He is a tremendous ball-handler who can blow by opponents using purely his first step, but also has a knack for knowing when to slow down and speed up, sporting a very low center of gravity to complement his ability to handle the ball on a string. He is outstanding at rejecting ball-screens, splitting the pick and roll and keeping his dribble alive and continuing to probe with the defender wrapped around him. He regularly forces defenses to shift and rotate, and then is fairly unselfish about finding teammates spotting up on the perimeter or cutting to the basket.

What separates Felder from most undersized small-conference gunners is his ability to create for others, in addition to his prolific scoring repertoire. His 47% assist percentage ranks second in the country only behind Kris Dunn, and he only turns the ball over on a minuscule 13.6% of his possessions to complement that. He is both a willing and creative passer who doesn't hesitate to move the ball ahead in transition, and can also execute plays nicely in the half-court. He'll often dish off bounce passes in impressive fashion on the move for easy baskets, and will regularly punish defenses for keying in too heavily on his scoring ability.

Felder shows nice toughness and is not afraid to drive into the teeth of the defense to draw fouls (which he does prolifically, and with extreme savvy) or finish around the rim, even through contact. He has a floater he can utilize if things are overly congested, even if he struggles at times against bigger and longer defenders as you might expect at his size, particularly when forced to finish with his off (right) hand. Continuing to improve his ability to finish what he creates around the rim could make him an even more dangerous scorer with off-hand and same-foot finishes as he continues to progress moving forward.

The biggest question mark NBA teams might have about Felder lies with his potential on the other end of the floor. He clearly has all the tools to be a very pesky defender with his strong frame, quick feet, solid length, excellent toughness and strong instincts, but his height is a clear draw-back that he'll have to show he can overcome against bigger, longer and more athletic opponents in the NBA.

Felder's outrageously large role offensively and the fact that he almost never comes off the court causes him to expend very little energy on that side of the floor currently. He stands around on and off the ball, shows poor effort getting around screens, and will give up on plays fairly frequently. Playing a smaller role at the professional level, it's not out of the question that he could offer some value defensively as a pesky waterbug type who hounds opposing ball-handlers for the length of the court.

Felder has accumulated an impressive reel of game-film showing he can compete against the highest levels of competition in college basketball, but it probably wouldn't hurt to make the NCAA Tournament and continue to prove his mettle as of the best point guards in America. Whether he decides to enter this year's draft or wait for 2017 when he's a senior, Felder has shown NBA scouts that he is a prospect that needs to be taken very seriously.
Read Next...