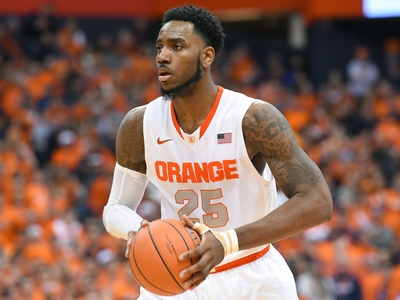 An underachiever for the better part of three years at Syracuse, Rakeem Christmas came to life as a 23-year old senior. He strung together a very productive season that will unfortunately come to a premature conclusion as Syracuse self-imposed a postseason ban preventing the team from competing in the NCAA Tournament, ACC Tournament, and NIT.

Christmas' role grew dramatically playing for one of the weakest Syracuse teams in Jim Boeheim's tenure, with his usage rate rising from a middling 12-13% his first three years to 26% as a senior. Despite the huge increase in touches, his efficiency remained extremely high, with his 62% TS% rating 14th best among college players in our Top-100 prospect rankings. He's been very effective with his back to the basket this season, is a near-automatic finisher around the rim off cuts and pick and rolls, and hits a respectable 71% of his free throw attempts, a place where he's found himself very frequently.

Sporting very good physical tools, Christmas doesn't have great size for a center at 6-9, but makes up for that somewhat with a very long 7-3 wingspan, strong athletic ability, and a frame that should continue to fill out in time. This, combined with his solid timing and ability to get off the ground quickly, helps him as a rim protector, where he blocks 2.9 shots per-40 minutes, good for 12th among DX Top-100 prospects.

Christmas still has an uphill battle in terms of showing he can translate his effectiveness within the confines of Syracuse's 2-3 zone defense to NBA settings, where he won't just be able to park in the middle of the paint for 35 seconds every possession.

Beyond the numbers, his awareness and intensity level still leaves a lot to be desired at times, as he's frequently posted up due to his lack of lower body strength or caught out of position showing lackadaisical effort and poor fundamentals. This shows up in his rebounding numbers as well, where he's just average at the moment, despite having good hands and strong physical tools. Besides learning an entirely new way of playing defense at age 24, Christmas will likely need to move down a position in the NBA as well, as he'd almost certainly struggle having to guard centers full-time, all of whom will be significantly taller and stronger than him.

Christmas has done an excellent job of making substantial improvements as a senior, but there are still significant question marks about how his game will translate to NBA settings. His offensive game remains limited, as he's much more of an undersized center offensively than the type of versatile power forward we're increasingly seeing in today's NBA. Trying to post up NBA big men will likely be very different than backing down college teenagers, and his perimeter game hasn't shown much improvement since he arrived at Syracuse, besides his free throw shooting.

Combine that with the fact that he's the oldest player in our Top-100 rankings by nearly five months (if he were an international player he would have been automatically eligible for the 2013 NBA Draft) and it's fair to question how much upside he still has left to tap into. Christmas is a day older than Brandon Knight for example, who played his last college game four years ago. He is four and a half months younger than Derrick Favors, who is in his fifth season in the NBA. The track record of players in this mold is not encouraging to say the least.
Read Next...