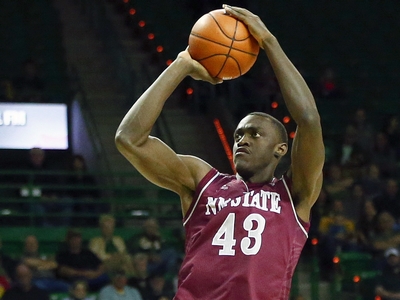 Mike Schmitz
@Mike_Schmitz
New Mexico State big man Pascal Siakam ranks among the most productive players in college basketball, averaging 27.0 points (57% 2P%), 13.6 rebounds, and 2.1 blocks per-40 minutes, while posting a 32.8 PER. From a player standing 6'9, with strong athleticism, a very long wingspan and an excellent work ethic, that has to be taken seriously. But with a strength of schedule ranked just 295th according to KenPom, NBA scouts have had painfully few opportunities to evaluate him against quality competition.

Last night New Mexico State played against Baylor, a team that finally featured some real size and athleticism, which prompted 15 NBA teams to send representatives to Waco to scout the game. While the Aggies trailed by double digits for almost the entire contest, and it is difficult to draw too many long term conclusions off this contest alone, this at least gave us some better film to work with in breaking down Siakam's strengths and weaknesses.

Via Mike Schmitz, here's a five minute video breakdown of some of the more notable things NBA scouts were able to see last night, both good and bad, on either end of the floor.