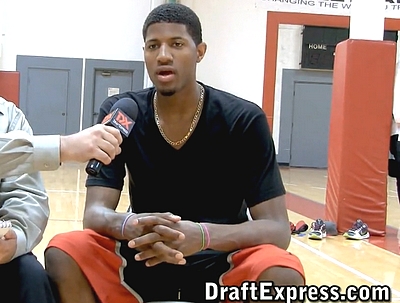 Of all the players in this draft, none elicits as wide a range of responses from NBA talent evaluators as Fresno State sophomore Paul George.

An extremely late bloomer from the out of reach desert town of Palmdale, California who was completely overlooked by Pac-10 teams after being deemed a two-star high school recruit, George is fairly young for his class and appears to have a huge amount of room to grow as a prospect.

As we quickly found out while watching him work out in Southern California, George is an incredibly tantalizing prospect to watch in person due to his physical tools, versatile skills and considerable upside.

The first thing you notice is that he is much bigger than the 6-7, 190 pounds he was listed at in high school (or even the 6-8 that Fresno State pegged him as), measuring a legit 6-9 in shoes with a solid 6-11 ¼ wingspan at the NBA combine. Clearly he has grown a few inches in the past few years and, although his body could still stand to put on weight, his frame should have no problem filling out over the next few years.

The second thing that stood out about George is just how versatile and dynamic a player he is -- far more than we had given him credit for up until this point. Exceptionally smooth with terrific body control and the ability to get off the floor quickly, George is an extremely impressive athlete.

The last revelation from this workout involved Georges skill level. Despite his imposing size, he is a pure swingman -- not the SF/PF we had listed him as following his freshman season (when he played primarily at the 4 spot). His ball-handling skills are excellent for a 6-9 player. He handles the ball on a string and looks incredibly confident, almost effortless, in the way he creates shots for himself in the mid-range area.

As you can see in the video below (take note of the sequence starting 28 seconds in), Georges size, coupled with the elevation he gets on his jumper, allows him to get his shot off whenever he pleases in isolation situations. This was something of a curse for him in college, as he was allowed to take pretty much any shot he wanted in an undisciplined, disorganized offensive system. George clearly did not get the kind of direction and accountability that a late blooming player such as himself needs.

With the right coaching (and a more serious environment), George has the tools to develop into an incredible mismatch.

George scored in a variety of ways in the competitive four on four pickup games we took in: turnaround jumpers and basic post moves (video 2:07); smooth, effortless NBA 3-pointers (2:17); beautiful mid-range jumpers; off the dribble getting to the rack; and ferocious put-back dunks, which he executed with frightening ease. Hes going to be a terror in transition on the right NBA team. His length and explosiveness allow him to finish incredibly well around the basket -- check out the series of dunks we filmed in the video above, starting at the 5:10 mark, for evidence of that.

The most impressive part of Georges workout from our perspective was the potential and intensity he showed on the defensive end -- something we rarely saw at Fresno State. His outstanding size, length, lateral quickness and instincts give him the potential to develop into a Trevor Ariza-type defender. Hes capable of defending up to three positions at the NBA level, and is fully capable of impacting a game on that. Georges anticipation skills were on full display. He was able to block shots, get into passing lanes, contest jumpers and generally touch everything in his area.

George has been criticized for his laid-back demeanor dating back to his high school days. Seeing how easily the game of basketball comes for him, its not hard to see where this is coming from. He has gone from being an unheralded prospect to being discussed as a legitimate lottery candidate, which is a huge jump as far as expectations are concerned.

The biggest factor for George will be whether or not he lands on a team where hell be pushed consistently by the coaching staff and challenged to reach his full potential as a player. While his talent is impossible to ignore (and his ceiling is obviously incredibly high), George still has plenty to prove in terms of his ability to impact the game in a manner that is conducive to winning games -- his Fresno State squad underachieved badly this year. He must show that he can play with a killer instinct and display the willingness to do whatever it takes on both ends of the floor to help his team win.

To his credit, George seems to realize this and touched on that topic in the video above (1:57). Still, theres a big difference between flashing talent in a workout setting and translating it to an actual NBA game. Much of that will come down to how hard George is willing to work (something his trainer Don McLean praised him for emphatically to us) and the situation he finds himself in.

In terms of pure upside, though, there may not be five players in this draft with more overall talent than what we saw from George in Los Angeles. The buzz around him has been gradually building over the past few weeks, to the point that its no longer a stretch to say he could be the first wing player taken after Wesley Johnson.

With teams such as the Los Angeles Clippers (his favorite team growing up), Utah Jazz, Memphis Grizzlies and Milwaukee Bucks all looking for a dynamic swingman who can create, shoot and defend, the chance of George being picked in the 8-15 range looks very good at the moment.

The first one (during which our video footage was filmed) was made up of NBA draft prospects, such as George, Jordan Crawford, Damion James, Luke Harangody, Nick Young and Frank Robinson.

The second workout (which our evaluation is based on) featured the likes of George, Jordan Crawford, Dominic McGuire, Joe Crawford, Frank Robinson, Nik Raivio and Marcus Johnson
Read Next...