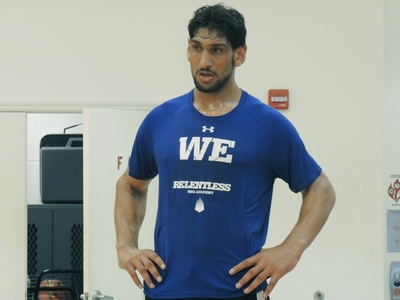 DraftExpress
@DraftExpress
An interview with Satnam Singh featuring footage from his pre-draft workouts with Kenny Natt and Daniel Santiago in Bradenton, Florida at IMG Academy

Singh is a 7-2, 290 pound center born in India who came to IMG in September of 2010. He played for their prep school team, averaging 9.2 points, 8.4 rebounds and 2.2 blocks in under 20 minutes per game according to an article in Sports Illustrated, and elected to enter the 2015 NBA Draft due to the unlikelihood of being cleared academically by the NCAA and the complications involved with arriving in the States not knowing a single word of English.

Singh, only 19-years old, has made tremendous strides as a basketball player, particularly as of late, and impressed over the course of a week of workouts we watched at IMG with his solid mobility and tremendous shooting touch (including range out to the NBA 3-point line) for a player his size, as well as a seemingly outstanding work ethic and gregarious personality.

Singh is far from a finished product at this stage, particularly in terms of his conditioning, experience-level and feel for the game. His physical tools and skill-level leave a lot of room for optimism, though, and may make him worthy of a team deciding to invest a late second round pick and attempting to develop him on their D-League affiliate to see how he continues to progress over the next few years.