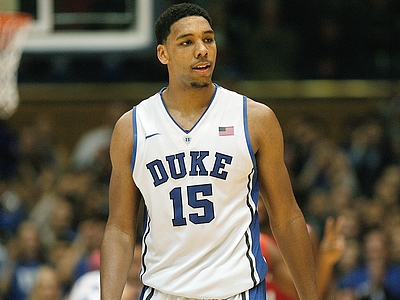 Mike Schmitz
@Mike_Schmitz
For the past few years, NBA teams and fans have been enjoying the unique insight provided by SportVU, the data tracking camera systems installed at every NBA arena.

That technology is slowly trickling down to the college level, and we were fortunate enough to receive a treasure trove of data in the past few days, providing some incredibly unique insight into potential #1 pick Jahlil Okafor as a college player and NBA prospect.

To better explain the data, we've added in a video breakdown of Okafor's impact on the offensive and defensive ends, which help visualize his unique skill-set, as well as his strengths and weaknesses at the moment.

What can we learn?

A Solid Sample to Work With

Duke has played 19 games so far this season, 10 of them on their home floor at Cameron Indoor Stadium, where the cameras are installed. Thankfully, of the nine games they've played away from home, four were played at NBA arenas (the homes of the Brooklyn Nets, New York Knicks, Indiana Pacers), giving us a solid 14 game sample size of nearly 450 minutes. Additionally, looking at the games we don't have data for, it doesn't appear that Okafor had any less success offensively, on average, than he did in the games we do have at our disposal.

Comparing Okafor With Other NBA Centers

This should certainly not be viewed as an apples to apples comparison, since Okafor is going up against significantly worse competition in the form of 18-22 year old college players, but it does provide a baseline for which to understand the different categories we are looking at. In particular, it shows how much Okafor's role in Duke's offense differs from that of the NBA centers we looked at, as well as the impact a player of his caliber can have in the college basketball setting. It will be interesting to see how Okafor's role evolves as the year moves on, as well as how he'll be utilized in the pros.

Okafor Rarely Touches the Ball Outside of the Paint

Before we delve further into the data, it's important to distinguish the difference between a post touch and a paint touch in the SportVU terminology.

Post Touch: A post touch occurs when an offensive player catches a pass while in the act of trying to score with his back to the basket (posting up), regardless of whether he's inside the paint or not.

As we'll see in the video below, many of Okafor's post-up attempts begin outside of the paint, but end up close to the basket, because of his sheer strength and terrific skill-level.

Okafor has posted up incredibly often for Duke--200 times so far this season in the 14 games we have data on. As mentioned, this represents 52% of his overall half-court touches, and Duke scores 1.3 points per possession when Okafor gets a post touch, even though he only actually attempts a field goal 41% of the time. That percentage is a bit low compared with his NBA counterparts, and likely representative of how often he's double-teamed. Okafor draws fouls at a tremendous rate (8 times per-40), and is a very solid passer as well.

By contrast, Duke scores just .993 points per possession overall in half-court situations, per Synergy Sports Technology (including Okafor's post-up attempts) which helps explain why they look to get him the ball with his back to the basket as frequently as they do. 14.3 of Okafor's 25.9 half-court touches per game come off Post Touches.

For comparison's sake, only one player in the NBA gets more post-touches than Okafor currently does in college: Al Jefferson. His post touches aren't quite as fruitful for the Charlotte Hornets as Okafor's are for Duke at .98 PPP, which is understandable since he's going up against NBA caliber defenders, who are far more physically gifted and equipped to handle a player of his dimensions.

Another interesting facet of the SportVU data is the breakdown of a players' success rate off zero, or 1-2 dribbles. It's usually far more difficult to score off the dribble than it is in situations when a player can simply catch and shoot immediately, and Okafor's splits confirm that to a certain extent.

When taking a field goal off zero dribbles, Okafor converts an outrageous 75% of his attempts, while when forced to dribble once or twice, that number drops to a still very impressive 58%. Of the six NBA centers we looked at in this sample, only Al Jefferson and DeMarcus Cousins are forced to operate off the bounce more frequently than Okafor does.

Paint Touch: This refers to all instances in which the player receives a pass inside the paint, including the post touch category above (but excluding post-ups which start outside the paint), adding in such actions as cuts, pick and roll finishes, or when a player receives the ball after running the floor in transition. The player doesn't need to have both feet, or even all of one foot in the paint to count as a paint touch.

Okafor sees quite a few of these, eight per game to be exact. Duke scores 1.46 points per possession when he does get a paint touch, as he converts on an impressive 75% of his field goal attempts in these situations. As you'll see in the video below, his hands, footwork, touch and dexterity are nothing short of amazing for a player his size.

(Video may not load with IE. Use Chrome or Firefox)

While Okafor is the most prolific and skilled offensive big man in college basketball, his play on the defensive end of the floor doesn't inspire anywhere near the same praise.

The numbers here suggest that Okafor hasn't been quite as ineffective as he appears to be on film at times. Okafor has been in a rim protection situation 8.8 times per game on average, which is a similar amount to that of his NBA center counterparts we studied in our six player sample. Opposing players have converted 45.5% of those field goal attempts.

There are a number of potential explanations for this. Our 14 game sample includes games against the likes of Presbyterian, Fairfield, Furman, Army, Elon, Toledo and Wofford, some of were huge blowout wins for Duke. At the same time, Duke's home ACC slate included games against Boston College and Pittsburgh, neither of which present imposing frontcourt challenges.

Watching the film, it's clear that when Okafor is operating at full intensity, he is able to make his presence felt with his strong frame, terrific length (wingspan measured between 7-5 and 7-6 in various settings) and solid anticipation skills. He's blocked 28 shots in 19 games so far this season, a decent mark, but his lapses in intensity, average awareness and fundamentals, and seeming unwillingness to be a consistent presence on a full-time basis have been quite glaring at times this year.

Okafor's ability to emerge as a legit rim-protector, as well as his prowess as a pick and roll defender, which we studied closely in the following video, will likely play a huge role in the type of NBA player he ends up developing into.

(Video may not load with IE. Use Chrome or Firefox)
Read Next...