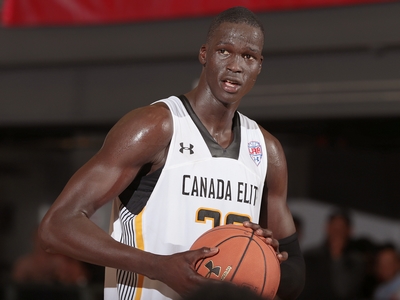 Jonathan Givony
@DraftExpress
Thon Maker, a Sudanese 7-footer by way of Australia who plays his high school basketball in Canada, will attempt to enter the 2016 NBA Draft, multiple sources with knowledge of the situation told DraftExpress.

The 19-year old Maker believes he has a strong case to be considered draft eligible, since he reportedly graduated high school in Canada in June of 2015, and is now technically in his fifth year of high school.

The official NBA collective bargaining agreement rule states that a player can be eligible for selection in the NBA Draft if the player is or will be at least nineteen years of age during the calendar year in which the Draft is held, and, at least one NBA Season has elapsed since the player's graduation from high school.

Subsequently, Maker has elected to withdraw from participating in the Nike Hoop Summit event this upcoming week in Portland in order to focus on his workouts and preparation for the draft. Maker had participated in last year's event and did not leave a strong impression throughout the week of practices and games.

Once considered a potentially transcendent prospect, mostly by uninformed voices based on his Youtube highlight reels, Maker's draft stock has never really gotten off the ground in the eyes of NBA scouts as he has struggled to separate himself in many of the events he's been seen at.

Besides Portland last year, the last exposure NBA scouts have gotten to Maker came in Toronto at the NBA Basketball Without Borders Global Camp during All-Star Weekend, which we attended alongside numerous scouts and executives. Maker had a better showing there, but still did not dominate the event the way some may have expected considering he was the oldest player in attendance.

Still, Maker is very highly regarded by the high school recruiting services, as he's ranked as a top five prospect in the loaded 2016 class by Scout.com.

His competitiveness, physicality and intensity level are impressive for a 7-footer with a 9'3 standing reach, and the fact that he's been able to add some bulk to his upper body and can knock down an open 3-pointer at times bodes well for his role-playing potential. So will his work ethic and strong character. Still, his lack of offensive polish, pencil thin legs, average feel for the game and explosiveness suggest that may be the extent of his long-term upside. And considering how big the jump is from high school basketball to the NBA, it will likely take years to achieve that, which some teams may feel is not worth the time or effort it will require.

With that in mind, Maker will be relying on building momentum in pre-draft workouts and potentially the NBA Combine to try and cement himself as a first round caliber prospect. If he can showcase a more polished offensive arsenal than he's been able to display up until now, in particular a more consistent jump-shot, he could certainly help his standing.

College coaches may express disappointment in Maker's decision, as he had taken official visits to schools like Kansas as recently as the past few weeks. Amateurism concerns were likely always going to be a significant hurdle in Maker's ability to ever get eligible for college, and may have played a role in his surprise decision to enter the 2016 NBA Draft.

Maker will now wait to see if the NBA agrees with his belief that he should be considered draft-eligible already in 2016.
Read Next...