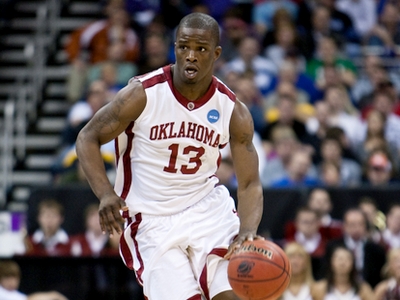 Joey Whelan
@DraftExpress
Our first look at the top NBA draft prospects in the very loaded Big 12 focuses on Iowa State's Craig Brackins and a number of other top prospects that we've focused on heavily towards the end of last season and during this summer.

Having profiled Warren at the conclusion of his NCAA Tournament campaign, as well as this summer at the LeBron James Skills Academy, we will wait until the season kicks off to revisit his scouting report.

Having profiled Aldrich at the conclusion of his NCAA Tournament campaign, as well as this summer at the LeBron James Skills Academy, we will wait until the season kicks off to revisit his scouting report.

Having profiled Taylor in depth this summer at the USA Basketball Tryouts, we will wait until the season kicks off to revisit his scouting report.

Rising junior Craig Brackins has already been detailed and analyzed a great deal on this website, but his unique blend of size and skill continually prompt us to further examine his game and potential. After a sophomore season that saw him come within a handful of rebounds (17 to be exact) of averaging 20 points and 10 rebounds per game, the 6-10 forward surprisingly decided to return for at least one more season at Iowa State before trying his hand at the NBA. Barring some type of major injury, the question at this point for Brackins isnt if he will be drafted, but how high and by whom?

When we last looked at the 22 year-old (next month) big man  about two-thirds of the way through last season  the biggest changes we noted physically focused on the tone he showed in his body and how the drop in body fat had helped him move. That much was and still is apparent as Brackins has significantly more energy on the floor, particularly on the defensive glass (something we have noted) where he hauls in a great percentage of his rebounds simply by outworking opponents. He also looks visibly quicker off the dribble both on the perimeter and in the post, something that helps immensely against defenders who have a distinct strength advantage over the still thin junior. There is no question though that he still needs to put up a good amount of bulk onto his body to effectively compete at the next level.

Brackins continues to become more and more physical when operating in the post, but it is doubtful he will ever be a true grind it out big man who can overpower defenders. The perimeter based skill set that makes the California native such an intriguing prospect to NBA scouts is very much evident in his back to the basket game. He continues to rely mainly on a quick turnaround jumper and a soft baby hook to the middle of the paint, a shot he can get off over most defenders give his length. In a rugged Big 12 conference that features more than its share of tough and talented frontcourt players, dont expect that aspect of Brackins game to suddenly change. He is and will most likely always be a finesse big man ala Channing Frye, but he does get to the free throw line at an excellent rate. Dealing with double teams continues to be an issue for Brackins who doesnt yet have the court awareness to sense them coming on a regular basis, but when he does anticipate the defense, he does a good job of spinning away from the pressure.

Isolation sets continue to be where Brackins is at his most dangerous and we mentioned earlier that he ranked as one of the best power forwards in last years draft class when it came to scoring in these scenarios. The junior is the classic matchup nightmare, with the strong handles and adequate enough quickness to break down big men who venture out to cover him on the perimeter. He is still mainly a player who will only attack in a straight line, but is getting more comfortable with a spin move he can execute. When facing smaller defenders who bring quickness, he counters with his soft stroke and ability to shoot over them. This touch only seems to be consistent from mid-range right now, as his form becomes more awkward and inconsistent the further out he moves.

The knock on Brackins defensively during the midway point of last season was his inability to play effectively when stepping away from the paint; the second half of the year didnt do much to change those thoughts. It has to be remembered, being a big man with a strong skill set geared towards playing away from the basket doesnt automatically equate into being a superior athlete. Brackins isnt a tremendous physical specimen, although he does run the open floor very well. Quickness and explosiveness are not a part of his makeup though and this has caused him to struggle guarding the pick-and-roll while also failing to be a shot blocking presence at his size. Weve already mentioned that he looks most comfortable covering traditional post players inside, but given his frame and skill set, he will need to be able to cover opposing players away from the rim, as well as get stronger to handle the much more physically imposing big men that hell find in the NBA.

In all, Brackins didnt do a tremendous amount in the final six weeks of the season to drastically change the book on him. He has a very nice skill set for a face up power forward, and his improved rebounding ability makes him a lot more attractive despite his defensive shortcomings. What it comes down to now is fine tuning a lot of the finer points of his game: improving the consistency of his stroke as he moves towards the perimeter, handling added defensive pressure better and anticipating better as a perimeter defender. Brackins is always going to wind up making some poor offensive decisions while he is at Iowa State, given the fact that he must single-handedly carry that team, these are unavoidable. Cutting down on these mistakes though will go a long way to showing pro scouts that he is ready and deserving of a high first round pick. After his breakout season last year, the onus will be on him to continue to improve and keep NBA decision makers as high as they were during the pre-draft process on his pro potential.

Having profiled Anderson at the end of last season, as well as this summer at the USA Basketball tryouts, we will wait until the season kicks off to revisit his scouting report.
Read Next...