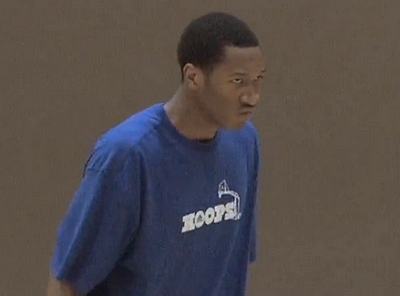 Projected top 10 picks Wesley Johnson and Ed Davis are running on fumes after an incredibly long and busy day at the NBA combine. It consists of athletic testing, interviews with NBA teams, a media session and an extended sit-down with the NBA Players Association that goes on for nearly three hours.

Johnson and Davis are exhausted, but they need to get a workout in, and trainers Tim Grover and Mike Procopio are here to accommodate them in this incredibly important time of the year. Their agent, Rob Pelinka, is on hand as well, keeping tabs on everything that is going on inside the gym. Johnsons brother Craig sits right next to him, urging Wesley along.

In the corner are two sneaker company executives, here to evaluate the players both on and off the court and envision how they might look representing their companys brand.

Johnson stands out immediately. He looks every bit as smooth and polished as we envisioned coming in. The explosiveness he shows is unmistakable despite the late hour and the fact that his body is running on nothing but adrenaline at this point. Some of the dunks he pulls off are incredibly impressive. He glides through the air with the body control of a 6-2 guard, despite measuring out the previous day at 6-7 ¼ in shoes with a 7-1 wingspan (ideal size for an NBA wing). Hes going to be a terror in transition right off the bat. Theres no question about that.

Johnson changes speeds fluidly, looking more comfortable executing advanced ball-handling moves in this setting than we expected. His mid-range game sharpens into focus. He elevates beautifully off the floor for a pretty pull-up jumper, creating separation and banking the shot off the glass effortlessly from 17 feet. His footwork is outstanding, his moves look quick and decisive, and the touch on his shot is excellent.

Any team working out Johnson over the next month or so is bound to come away extremely impressed. Hes far more skilled and polished than most players entering the NBA. Hes ready to contribute immediately, which has to be incredibly attractive to the teams in the lottery who want to get better right away.

The fact that Johnson a little bit older than other players in the lottery is probably working to his advantage at this point, since he comes in ready to play and is very much a proven commodity. He doesnt think that limits his upside though.

I look at that as a positive more so than a negative, he said. I didnt start playing basketball till the 8th grade or 9th grade. Im a late bloomer. Im still new to it basically. Im still learning a lot.

Perhaps more impressive is what weve learned about Johnson off the court. Hes an incredibly humble, well spoken young man with an excellent demeanor. He looks genuinely happy to be here, and hes not taking anything for granted at this stage.

Johnson was nearly a complete unknown going into the 2009-10 season. He was completely off the radar as a high school prospect and therefore does not share the same sense of entitlement that some of his fellow future lottery picks may struggle with at times.

That journey getting from high school to Syracuse taught me a lot, Johnson told us at the NBA combine. Bouncing around made me mature. It made me more hungry than anything. Ive had to prove a whole lot my whole life. Coming out of high school I wasnt highly recruited. At Iowa State I had to battle through adversity. At Syracuse I had to prove myself. Still to this day Ive had to prove myself. Im up for a challenge. Im a competitor. Theres a competitiveness inside of me.

Where will the next stage of Wesley Johnsons journey take him? Well find out on June 24.
Read Next...