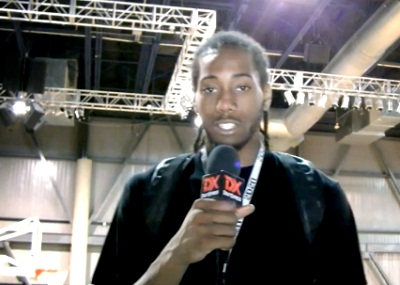 Richard Walker
@DraftExpress
Our 2011 west coast workout swing brought us to Impact Basketball in Las Vegas, where there were nearly 30 potential draftees preparing for their NBA draft workouts.

Joe Abunassar and his staff put each player through extensive workouts both on the court and in the weight room, keep them on an all-encompassing nutrition plan, and unlike many other training centers, have the ability to hold full five-on-five games on a daily basis.

Many of the players in attendance have been working out for almost a month, with others, such as Greg Smith, having spent even longer out in Vegas. The players work out six days a week, usually with a few two-hour on-court sessions daily to go along with basketball specific weight training and physical conditioning off it.

The on-court portion of the training features a mix of drills, skill work, individual training, and three-on-three or five-on-five scrimmaging, with the players usually getting in a few scrimmage sessions a week. There are always multiple trainers on the floor and the players are free to put in extra work once their scheduled sessions are over.

Many of the players are already reaping the benefits of their training, whether through skill-development or in terms of conditioning. In our first of three articles covering and interviewing players working out at Impact, we'll take a closer look at two prospects who have made clear strides since the college season ended in Kawhi Leonard and Greg Smith

One of the most highly touted prospects here training at Joe Abunassar's Impact Basketball, Kawhi Leonard was amongst the most impressive players we had the opportunity to see on a number of levels. Working on his shooting mechanics, ball handling, and overall perimeter skills, Leonard also impressed with his physical tools and stoic demeanor.

Leonard's workouts are geared towards his development as a full-time wing player. He sees himself as a long-term shooting guard/small forward with the ability to defend multiple positions, and seems to have a very good understanding of what he needs to work on. Since the day he arrived in Las Vegas, Leonard has been looking to add polish to his perimeter arsenal, especially his jump shot. We saw some promising strides in his skill level as we watched him go through extensive shoot-arounds, participate in two skill development sessions under the tutelage of Chauncey Billups, and play a few games of three-on-three.

One of the more positive signs we saw from Leonard came in the simple shooting sessions he went through on both days we watched him. Spotting up and knocking down shots from the midrange and beyond the NBA 3-point line, Leonard's shooting mechanics look significantly more consistent than they did during his days at San Diego State. His release point looked the same on almost every shot he attempted, and his footwork appeared to get better as he got more shots up.

In the skill development sessions, we got to see Leonard, along with Alec Burks and Malcolm Lee, work on a number of different spin dribble, step-back, and aggressive scoring moves. With Chauncey Billups taking time to teach each player the nuances of each of the things they were working on, Leonard looked exceptionally crisp putting the ball on the floor. Unlike Lee and Burks, Leonard has quite a bit of power to his gamesomething that should ease the transition he needs to make from the NCAA to the NBA.

Leonard was able to showcase that more easily than his jump shot in three-on-three competition. The rules of the game limited each team to one shot and out, meaning there were no second chance opportunities from offensive rebounds. Under those restrictions, each team was trying to get high-percentage shots on every possession.

Over the course of the games we watched, Leonard looked comfortable handling the ball in traffic and finding teammates moving without the ball. With his biggest strength, rebounding, removed from the equation here, he still made his presence felt on offense with a few midrange shots and finishes around the bucket, but did most of his damage defensively. As you'll see in our workout video, he was extremely aggressive when defending the perimeter and made some impressive plays rotating back to his man on the pick and roll. Leonard did nothing to dispel sentiments that he's one of the top defenders in this class.

Amongst all the prospects we saw here, Leonard may be the biggest beneficiary of Impact's on-court training. He's a ridiculous physical specimen with no body fat, long arms, and giant hands, but has room to improve skill-wise. He's been able to take advantage of his time here to the fullest since he loves being in the gym. With his defensive ability and workman-like interior game, Leonard's ability to showcase what he's been working on at Impact at the combine and in private workouts is worth keeping an eye on as he looks to climb up draft boards.

One of the first underclassman to elect to enter and keep his name in the NBA draft, Greg Smith was also one the first to start his training at Impact. That became abundantly clear right away when looking at Smith's frame. He's maximized himself physically over the last few months, looking big, strong, and lean. We were unable to see Smith in competitive action since he was back in the gym a day after a team workout, but he showed some unique things in the time we were able to watch him.

Perhaps the most ridiculous spectacle we saw all week came in Smith's post drills. Dwarfing most of the players here with his size, Smith also has exceptionally large hands, and on a number of occasions, simply snatched the entry passes directed his way out of midair, palming the ball away from his body as if it were a grapefruit. A prime example of what we're talking about comes just after the 1:00 mark in our workout video below.

The workout we watched was part of what amounted to a rest day for Smith who flew in late the night before to be in attendance. He started off with some shooting drills where he continued to work on his mechanics. The Fresno State product is still in the beginning phases of the development of that part of his game.

In post drills, Smith worked on his footwork and finishing ability. Though we didn't get to see him in competitive action, his sheer size and strength is impressive and should serve him well as he continues to become more fluid and polished with the ball in his hands.
Read Next...