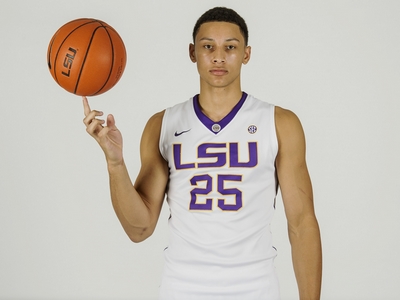 Mike Schmitz
@Mike_Schmitz
A more condensed version of this article was originally published on the Vertical on March 15th. Find it here in it's original format.

Long before some of the loudest but most uninformed voices anointed Ben Simmons the next LeBron James or Magic Johnson, there was already a significant debate within NBA front offices about whether Simmons was even the consensus No. 1 overall pick in the 2016 NBA draft. As the flaws in Simmons' game became more apparent for LSU this season, the question has never changed: Who's No. 1 in June?

For several reasons, Simmons' candidacy as the No. 1 overall prospect is in peril.

Video Analysis of the Last Game of Simmons' College Career

1. Simmons' lack of competitiveness in some crucial games has raised questions about his character as a basketball player. While many top picks succumb to the NBA star lifestyle and emerge as average competitors, it's rare to see that at the collegiate level. From Blake Griffin to Michael Beasley to Carmelo Anthony, those elite college players were rarely questioned about their drive during their collegiate careers. Simmons has displayed an apathy for defense, contact and delivering winning plays in crucial moments. Those troubling revelations in Simmons' game are cause for concern among decision-makers on lottery teams with whom we've had contact.

Here's what NBA teams wonder: If Simmons cares so little about winning crucial college road games at Tennessee or Kentucky that could have delivered LSU to the NCAA tournament, how much will he consistently care about competing over a far more physically and mentally draining 82-game pro season? Truth be told, Simmons will almost assuredly be on a bad team that will need to fight every night to win games.

2. Simmons' box scores have grown increasingly hollow. One NBA executive described him as a taller Rajon Rondo, a more athletic Evan Turner, or a skinnier Royce White. Simmons has displayed a penchant for stat-mongering like few players in recent memory, seeming to pad his numbers in blowouts. At times, it appears he only passes when guaranteed an assist and chases home-run plays at inopportune times in search of a highlight. Simmons seems to value those things over winning.

Simmons' porous defense is masked by his gaudy steal and block numbers. But when watching him closely, it's clear that no opposing player or coach fears attacking him. As Simmons rarely makes the effort to close out on shooters, put a body on opposing big men, or offer much beyond gambling wildly swiping for steals, his lack of intensity is amplified. He has wonderful anticipation skills as a rebounder and will wow you with his instincts in passing lanes. But overall, Simmons hasn't shown the length, toughness and inclination to emerge as an asset on the defensive end.

Simmons' short wingspan (measured 6-foot-11 at the Nike Hoop Summit in April and the Nike Skills Academy in June) won't help him play power forward on an NBA lottery team. To make up for his lack of length, he'll have to display a much higher activity level than what he's shown in college.

3. The report on defending Simmons in the half-court is well known and was utilized effectively in recent weeks. Teams put smaller players on Simmons, backing off him and daring him to shoot. Simmons seems to have zero confidence in his outside shot and becomes passive when guarded this way.

For his size (6-10), Simmons is a gifted ball-handler. He has an incredible ability to change speeds, get to the rim and finish in transition. In the half-court, things haven't been quite as easy against better teams, particularly late in games. There are real questions about pairing Simmons with other ball-handlers or non-shooters in the NBA. Does drafting Simmons in the high lottery mean a team needs to trade the likes of D'Angelo Russell, Julius Randle, Jahlil Okafor or Dario Saric?

4. Simmons' teammates aren't as bad as many would lead you to believe. LSU has six consensus top-100 recruits on their roster (and two more who were ranked just outside the top-100 by various outlets), far more than the overwhelming majority of teams that made this year's NCAA Tournament. If Simmons were truly the -transcendent can't miss superstar many would lead you to believe, he would have found ways to win games against the likes of College of Charleston, Houston, Wake Forest, Marquette, Tennessee, Alabama, N.C. State and South Carolina, all of whom are ranked outside of the KenPom Top-50. LSU doesn't lack talent as much as they lack chemistry, and part of the blame for that has to go to their best player.

Many will point the finger to LSU's head coach Johnny Jones as the culprit behind his team's underachieving, and there certainly is some truth to that. But Simmons has no one to blame for that but himself. Simmons may never get the chance to pick his head coach again in his career, and he decided to put his faith in Jones and his own godfather David Patrick. If Simmons was so quick to quit on his own self-described family member and the head coach he handpicked for himself to lead him at the college level, as soon as things got a little bit difficult, what will happen when he hits a patch of adversity at the NBA level? Will his future agent demand a trade? Or for the head coach to be fired like Simmons' supposed new best friend LeBron James reportedly did with David Blatt?

5. The concerns about Simmons' character didn't magically appear the moment he arrived on campus in Baton Rouge. Those sentiments also have been expressed by members of the Australian national team who have spent time with him at the junior and senior levels. Australian players and coaches who have been around him don't speak about him in flattering terms, calling him the Yank to highlight how different he is compared with most of the players from that country, and perhaps highlight how much moving to the United States at a young age and immersing himself in the AAU world has shaped him.

Those who know him best say he needs things to revolve around him on and off the court and that he's often been close-minded to coaching or instruction. Can all this be blamed on LSU? Check out the mentality section of Simmons' weaknesses breakdown in a video Mike Schmitz created prior to this season.

The uncertainty surrounding Simmons has cleared the way for Duke forward Brandon Ingram to be considered the No. 1 overall prospect.

Ingram is 14 months younger than Simmons, has a longer wingspan by four inches and a standing reach six and a half inches higher. Ingram is a better shooter  which is perhaps the most important skill in today's NBA  and has shown a much better trajectory throughout the college season. The intel on Ingram as a teammate and competitor has been much stronger than Simmons'. Yes, Ingram has a much more frail frame now, but it's easy to envision him filling out as he ages and matures.

There is still plenty of time for Simmons to improve his approach to the game and reach his potential. Although he's not the generational talent he's been sold as by some, he's a unique prospect who could emerge as an incredible asset to a team down the road if he's willing to address his flaws.

If Simmons had a far stronger preliminary case in November to become the No. 1 overall pick in June, our recent conversations with NBA executives have offered a far different reality for Simmons. There may never be a consensus choice for the first pick in this draft, but make no mistake: The debate is on, and the overhyping of Simmons has made its reckoning. Ingram has played himself into the debate, and it promises to rage into late June.
Read Next...