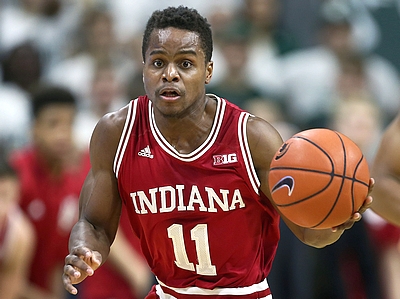 A four year starter at point guard for the Indiana Hoosiers, we've written at length about Yogi Ferrell's prospect status, going back to his days as a highly regarded McDonald's All-American. With his senior season now complete, we can wrap up his draft profile and take one last look at his potential as a NBA player.

Ferrell has developed into a reliable point guard as the linchpin to some of the most efficient offenses in the country, culminating in the Hoosiers scoring the third most points per play. He is an unselfish player who will run the team's offense and keep his teammates involved. His pure point rating of 3.35 has remained relatively steady from his junior season but represents a drastic increase from his first two season and rated seventhamong point guards in our top 100 prospect rankings. He is very confident with the ball in his hands as a decision maker and has no fear about being aggressive to get his team a bucket. 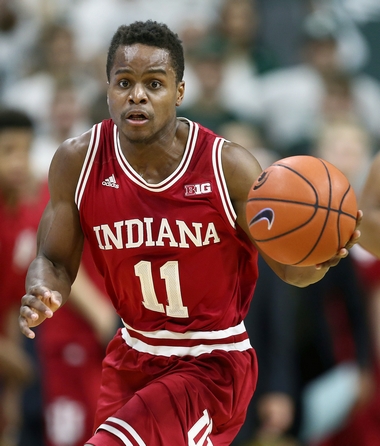 What Ferrell lacks in size and stature at only 6'0, 178 pounds with an average wingspan, he makes up in athleticism with elite speed and quickness. Ferrell will have to prove he has what it takes to overcome his lack of size in order to make an impact against bigger players, but he went a long way with that as a senior. It isn't easy for a small point guard to make his mark in the NBA, but there are several recent examples of players of his size getting drafted including Shane Larkin, Isaiah Canaan, Isaiah Thomas and Patty Mills.

He has ran an up-tempo, pick and roll heavy offense that has prepared him for the NBA, with these possessions accounting for almost 30% of his individual offense according to Synergy Sports Technology. He doesn't rub off the screen tightly but he only needs a small amount of separation as he is then able to rely on his quickness to get past the defense into space. From there, he can create his own shot or find his teammates in scoring position. His smaller size does impede his ability see over the defense to find open teammates from time to time, but he has a high level passing ability and a wide array of ways to get the ball to his teammates, including accurate lobs, pocket passes and over the head passes.

Ferrell isn't afraid to pull up off the dribble when the defender goes below the screen, either from the three point line or a step or two inside the arc and he shoots 40.3% on these attempts according to Synergy Sports Technology. This is a big increase from the 34.1% he made as a junior. While his shot selection has improved over his career, his ability to convert these attempts still leads to ill-advised long two's or contested shots off the dribble early in the shot clock. With his quickness, he will be able to create these shots with the shot clock winding down and he will need to continue to weed out these tough shots with time remaining on the shot clock to run the offense to find a better look within the flow of the offense.

Ferrell relies on pull-up jump shots off the dribble because he has struggled throughout his career to finish inside the paint. He ended his senior season converting just 53% of his 113 attempts logged by Synergy Sports Technology, and 46% of his career 2-pointers. When he sees a lane to the rim, he wastes no time in a straight line drive to the rim but he struggles to finish when challenged by a player of any size at the rim. It would certainly be helpful for him to add some touch to his floaters to give him confidence to continue his drives into the paint to create offense instead of always pulling up from mid-range.

Defensively, Ferrell is at a disadvantage from the start due to his small frame, as his opponent can easily shoot over him on the perimeter. He doesn't help himself by competing inconsistently on this end, not always moving his feet to contain dribble penetration and subsequently giving up on the play once his man is past him. He also doesn't defend well off the ball, losing his man or not rotating properly. It's hard to project him as a strong defender at the next level with his physical tools, but showing more of a commitment with energy, focus and playing within his team's concept will at least allow him to provide some value.

By being a key member of three NCAA Tournament teams, all of which got there through their offensive proficiency, Ferrell has established his ability to lead a strong offense. While he has used his time in college to improve his shot selection and passing ability, he hasn't achieved similar strides defensively. He has to play hard on both ends to overcome his lack of size and if he does, he could become a backup or third point guard that provides a steady hand at the point guard position with some scoring ability.
Read Next...