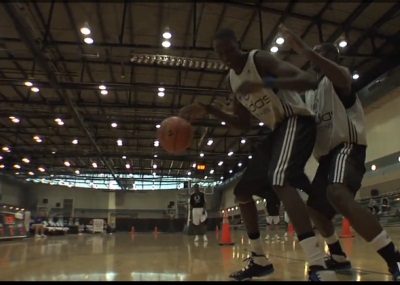 Malian center Bakary Konate, one of the more experienced players on this African roster as a member of Spanish ACB squad Gran Canaria and someone we've seen play fairly extensively at the Euroleague junior tournament level, had just an average showing over the course of the week. His biggest limitations are physical ones. His body is still underdeveloped and his frame does not leave much room for optimism at the moment. His coordination and balance suffer in turn, making it difficult for him to establish himself as a presence in the paint at either end of the floor despite his excellent size and length.

With that said, Konate did drop some intriguing hints of potential. He showed nice timing rotating for emphatic weak side blocks, made some good interior passes and hit the occasional turnaround jumper in the post. He also has some feistiness to him (even if he lacks the strength to take advantage of it at the moment), and he is clearly still in a premature stage of development despite the exposure he received early in his career.

One of the more intriguing prospects to emerge from this camp as far as long-term potential is concerned, Bryan Pamba is not the type of guard you expect to find on Team Africa's roster.

From a physical standpoint, Pamba has quite a bit to offer. He has good size for a point guard to go along with an excellent frame, long arms, terrific strength and outstanding athleticism. He excels primarily in transition at the moment, using big, powerful strides to make his way to the basket before finishing emphatically at the rim. His ball-handling skills remain a work in progress in the half-court, but he already shows the ability to create his own shot thanks to an excellent first step.

Defensively, Pamba is a major asset to have on the court because of his terrific size, length, strength and athleticism. He is capable of shutting down either guard position and wreaks havoc in the passing lanes with the energy, intensity and competitiveness he brings to the floor. His awareness and experience on defense leave something to be desired, but he undoubtedly has major potential at that end of the floor.

Shooting is where Pamba needs to improve the most. He sports a deliberate, awkward shooting motion that varies quite a bit from attempt to attempt and occasionally results in bad bricks. He did show the ability to make shots from time to time, though, particularly with a decent pull-up jumper from 15 feet, but this is an extremely streaky part of his game.

As a playmaker, Pamba is a mixed bag. On one hand, he displays the ability to create shots for others in the form of drive-and-dish plays and is capable of surprising you with his vision and creativity. On the other hand, he clearly lacks experience running a team in the half-court and is very much prone to pounding the ball and making poor decisions, rendering him fairly turnover prone.

His feel for the game looks improvable  something that hopefully will come in time with added experience and playing time. At the moment he looks more like an Eric Bledsoe-type combo guard  very much a feast or famine type from game to game and possession to possession. When at his best, Pamba displays great toughness and swagger and can do many things on the court thanks to his budding talent and excellent physical tools. But he clearly has a ways to go before reaching his full potential. He's already playing in France and is surely someone to keep an eye on over the next few years.

One of the more productive pieces on Africa's roster, Peter Jurkin had a pretty solid overall week at the adidas Nations and is definitely a player to monitor over the next few years.

Jurkin possesses solid physical attributes. He's a good athlete with long arms and wide shoulders that should fill out in time. His lower body is very poor, though, which is something he must work on. He loses his balance pretty easily and gets pushed around quite a bit.

Jurkin's main value at this camp came on the defensive end, where he showed nice timing rotating from the weak side and came up with a number of terrific blocks. He's a competitive guy who puts a very good effort in on this end, showing good toughness and intensity going after rebounds.

Offensively, Jurkin is a work in progress. He has average hands and doesn't have much in the way of footwork around the basket. He clearly lacks experience and polish. His touch around the basket isn't bad, though, and he was able to make his presence felt on the offensive glass, finishing well at the rim when given the opportunity to do so.

Jurkin committed to Indiana at the adidas Nations and will be an interesting prospect to keep an eye on at the college level.

Sudanese center Obij Aget, a 7-footer with skinny legs but a solid upper body, made a good impression over the course of the week and could have some nice upside to grow into down the road. A competitive guy with above average coordination, Aget has great length around the rim and was a consistent presence on the offensive glass. He doesn't have any type of back-to-the-basket game but is capable of making a mid-range jumper with decent mechanics if left open. He made plays on defense on occasion, even if he looked lost at times. It's clear he lacks experience playing high level basketball.