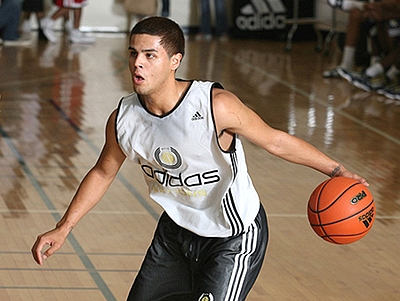 Colombian-born combo forward Hanner Perea was one of the more physically impressive players in attendance here. Based in North Carolina, Perea is already drawing quite a bit of hype from the high school recruiting services, which is understandable considering the upside he shows.

A legit 6-7, with long arms and a chiseled frame, Perea already sports an NBA body despite going into just his junior year of high school. He's an exceptional athlete, cramming home a number of incredibly impressive putback dunks off the offensive glass over the course of the week. He has an outstanding vertical leap and is able to get off his feet very quickly. Perea has an incredible second and third bounce as well, which is what makes him such an effective offensive rebounder. The coaching staff designed a number of lob plays for him in their half-court offense as well as on in-bounds plays.

The rest of Perea's offensive game is still very much a work in progress. He does not possess a high skill level and seems to have just an average feel for the game at the moment. He's able to post up somewhat effectively, but he is not much of a ball-handler or perimeter shooter, which stops him from making the full transition to playing on the wing at the moment. He relies too heavily on his physical attributes to get the job done, which is understandable but won't work nearly as effectively at the college level, particularly if he's to reach his full potential as a small forward prospect.

Defensively, Perea can guard the 3 and the 4 spots, and probably the 5 and the 2 as well if you asked him to. He has the strength to deal with big men and the quickness to match up on the perimeter. He lacks much in the way of awareness, fundamentals and experience at the moment, though, which is not a surprise considering his age.

Perea is obviously a guy to keep an eye on over the next few years to see how he's progressing from a skills standpoint. If his perimeter game starts to catch up with his athleticism, he could develop into an outstanding prospect.

Cesar Guerrero was the driving force behind a good Latin America team that finished a respectable third place at this event. He was something of a revelation here considering his lack of recruiting hype.

A small but very quick point guard with exceptional ball-handling skills, Guerrero is a fearless and highly creative lead guard who plays the game with great confidence. He pushes the ball extremely well in transition but is equally as effective in the half-court. He looks comfortable running the pick-and-roll and finishes much more effectively around the basket than you might expect on first glance thanks to the toughness he brings to the table. A shifty guy who changes speeds well, Guerrero loves to split the double team and finish with a pretty floater once inside the paint.

Guerrero is capable of making pull-up and spot-up jumpers from all over floor. He can get a bit streaky with his shooting, but he should be able to develop into a solid perimeter shooter at the collegiate level. The only thing holding him back at the moment is his average shot selection. He has the tendency to get overconfident at times and force the issue. The same thing applies to his decision making as a playmaker. Guerrero can create for others, often with great flair, but he tries to do a bit too much at times with the ball in his hands.

Nevertheless, Guerrero had a very impressive week. He went up against players much more highly touted than he is and held his own more than often than not. He lacks the size and length to be considered a top-flight guard prospect at the moment, but he should turn into a terrific college player at the very least, with a chance to develop into more than that in time.

Brazilian Gerson do Espirito Santo showed interesting flashes of potential as the week wore on. He is not a very polished player, but he has some nice tools to build off. At 6-9, Santo is a long, skinny, athletic player with the size of a power forward but the skill set of a small forward. He likes to operate on the perimeter and shows a smooth ability to knock down mid-range jumpers; sometimes creating shots for himself off the bounce. He grabbed some offensive rebounds but struggled quite a bit defensively. He lacks much in the way of fundamentals, particularly when it comes to his shot selection.

One of the more complete and fundamentally sound players seen at this event, you can tell right off the bat that Jordan Burger is another in a long line of Spanish school basketball players.

Smart but not particularly athletic, Burger likes to operate on the perimeter and has the skill set to do so effectively. He has a nice first step and is not bashful about going out and creating his own shot. He showed good timing in attacking his man off the dribble. Burger is capable of changing speeds easily, getting to the basket more so with his smarts than his explosiveness. He always dribbles the ball with his head up, which means he can find the open man off the bounce and has no problem operating within a team setting. He's a competitive guy who plays hard on defense and has the tools to get the job done with his nice length, size and frame. He didn't show much in the way of a jump shot and probably needs to improve his mid-range game to continue to be effective as a slasher at the pro level considering his average athleticism.

Despite his young age, Burger looks like a pretty safe bet to have a long and productive professional career, especially if he continues to develop his all-around game.