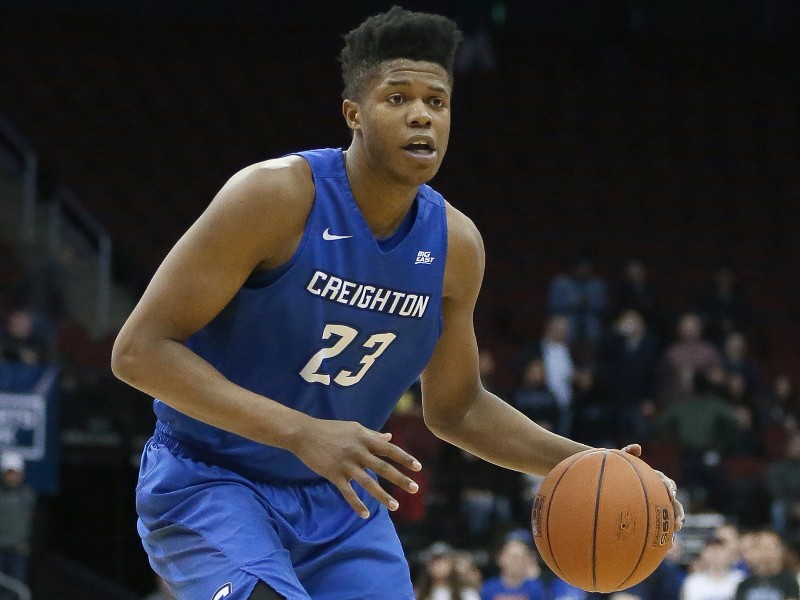 Measured at 7'0, 230 pounds, with a 7'2 ½ wingspan, Patton is an exceptional athlete for the center position. He has a quick first step to move from defense to offense and he is a great rim-runner in transition where his 1.47 points per possession ranked as one of the highest marks in the country last season according to Synergy Sports Technology.


Offensively, Patton has settled into a role that makes it easy for scouts to project him as a player who can fit into NBA offenses. The majority of his offense came out of the creation of others, either off cuts to the rim or lobs out of the pick and roll, and he isn't going to demand the ball with his back to the basket for post-up opportunities. He is always looking to cut into space and he has soft hands that allow him to make tough catches on the move. An impressive leaper off two feet to play above the rim, he finished 74.8% of his field goal attempts around the rim according to Synergy Sports Technology, the sixth best mark of all players with at least 100 attempts.

While Patton plays with a solid activity level, he's a little hesitant to play through contact, and NBA teams will want him to become more aggressive around the rim while learning to be able to finish while also getting fouled. His 3.8 free throw attempts per 40 minutes was the second lowest among centers in our top 100 and developing the toughness to play more physically should help him become an even better finisher at the rim.

Outside of that, he has shown flashes of skill on the perimeter that leads to some added potential that the right team can unlock. While he doesn't have a high sample of jump shots and made just 27% of the 33 attempts logged by Synergy Sports Technology, he's willing to shoot when left open, although his mechanics will need some serious work to have the green light. This improvement isn't a given since he has struggled from the free throw line as he converted only 52% of his attempts on the season, which may be more due to mental struggles than anything.

He is calm on the ball on the perimeter, allowing players to run off him in the flow off the offense. He is gotten better at reading the defense and distributing the ball from the top of the key by dishing out 1.8 assists per 40 minutes. He's also shown some comfort putting the ball on the ground and taking guys off the dribble to finish at the rim, especially going left. While he'll certainly be more of an interior player and his decision making away from the basket must improve (his 2.7 turnovers per 40 minutes being the product of trying to do too much off the dribble), he has the potential to develop into a more versatile offensive player operating away from the rim when called upon.

His ability to rebound against NBA big men will be one of his biggest question marks heading into his professional career. He wasn't a dominant rebounder on either end and his 9.6 total rebounds per 40 minutes (7.1 on the defensive end) ranked near the bottom of centers in our top 100. While he has the explosiveness, second jump and soft hands to control the glass, he has struggled reading missed shots off the to be in the right position to rebound. He got outmuscled time after time on the glass and will need to add strength to his frame to be able to fulfill what will surely be a required role of his as a rebounder. Again, improving his physical toughness and mentality will go a long ways on this end, as he has the tools to be outstanding in this area if he puts his mind to it.

As an individual defender, Patton has tremendous tools, but is still learning the fundamentals and how to harness his gifts to impose his will. At this point, he makes the most impact on the perimeter with his quick feet by being willing to switch onto guards off screens which will allow his team to be aggressive with their ball screen coverages. Even still, he isn't all the way there yet as he is often upright on the perimeter, which lowers his ability to cut off penetration. To maximize his defensive potential, he will need to improve his footwork to be able to stay in front of his man instead of just relying on his lateral quickness.

His 2.3 blocks per 40 minutes demonstrates that he can become an adequate rim protector in time, but his awareness is still a work in progress, as he is often a step late to rotate over to cut off penetration and challenge shots at the basket. He also has a tendency to needlessly swipe at the ball, which gets him into foul trouble, as he was disqualified from three games and had four fouls in eight additional games. Patton is still raw defensively in part because of his lack of high level experience. As he matures, and fills out his frame, he'll need to focus on his fundamentals and awareness to hold his own against other big men.

Despite his redshirt season, Patton is still relatively young for his class as he will turn 20 just a few days before the draft, making him younger than some true freshman and younger than all but a few sophomores in our top 100. His maturity has been questioned as he can be overly emotional at times.

With his elite athleticism and high energy level, Patton has outstanding potential to grow into as a modern day center. He is still at an early stage of development, and will need to make strides in his skill set to earn consistent minutes, but his high ceiling should make him one of the first big men off the board this draft as long as he has a strong pre-draft process.
Read Next...