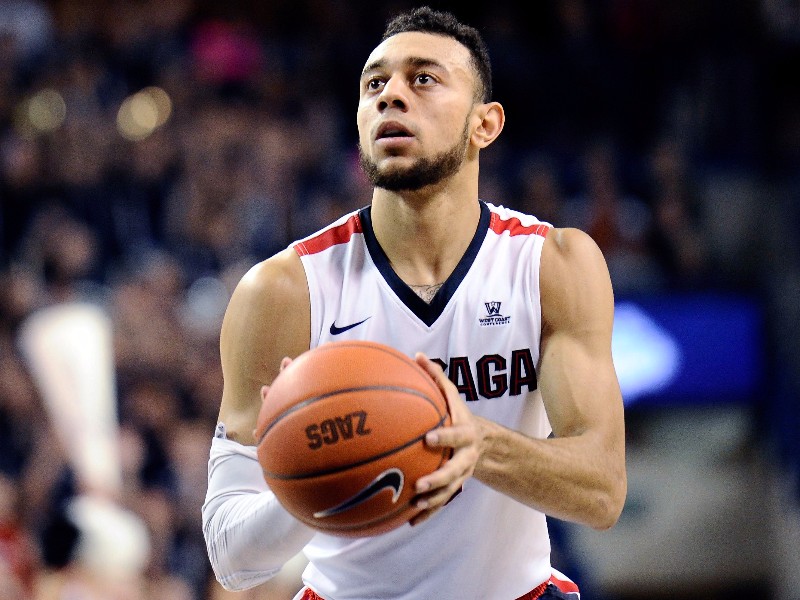 Josh Riddell
@Joshua_Riddell
After two years as a full-time starter at Washington, Nigel Williams-Goss decided to transfer to Gonzaga to continue his collegiate career, primarily to find a program with more stability. After sitting out a season, he became a key cog for the Bulldogs who made it all the way to the NCAA Tournament Championship game before falling to North Carolina. The #37 RSCI ranked recruit in 2013, Williams-Goss elected to join teammate Zach Collins in declaring early for the NBA Draft.

Measured at 6'3 at the NBA Draft Combine, Williams-Goss has good size for the point guard position, while his 6'7 wingspan helps him play even bigger. He isn't a standout athlete but he is a steady and even-tempered ball handler, rarely getting sped up on the ball and able to initiate offense against ball pressure. He isn't known for making highlight reel plays, but he helps his team win by distributing the ball and limiting turnovers to help his teammates get good looks.

Williams-Goss has experience playing the pick and roll, with over 44% of his derived offense coming from pick and roll possessions according to Synergy Sports Technology. He is adept at keeping his dribble alive as he probes into the paint and he can see over the defense to make the right reads out of ball screens.  He can make well-timed and accurate passes on the move to put his teammates in scoring position, averaging 5.8 assists per 40 minutes, while his 2.95 pure point rating ranked fourth among all players in our top 100.

He turned the ball over only 2.6 attempts per 40 minutes, one of the lowest marks among point guards in our top 100. He is confident on the ball, always with his head up to see the entire floor and is reliable with the ball in his hands. He gets into the most trouble when he gets pressured off the dribble or is forced to take quick shots, as he isn't comfortable when opponents speed him up and appears more comfortable navigating the game more at a more deliberate pace.

Possessing just an average first step, Williams-Goss can't always create separation off the dribble, relying more on change of speeds and probing with his size and frame to generate offense. He struggles at times to force help defenders to rotate, which closes passing lanes and lowers his efficiency. He doesn't have a polished mid-range game either, partially due to his struggles to find clean looks. This leads to contested floaters in the lane off the dribble and while he has displayed touch on attempts, it is going to be much more difficult to live off these in the NBA.

While Williams-Goss has shown he has the IQ and vision to execute an offense, he will need to prove he can score enough to keep the defense honest. His average athleticism hurts him in the half-court, but he uses his body well to score through rim protectors or get to the line where he was one of the most efficient players from the line in our top 100 by converting 86.7% on 5.8 attempts per 40 minutes. He is a capable finisher at the rim once he gets there as he converted 62% of his shots around the rim according to Synergy Sports Technology, although he attempted only 79 attempts.

Williams-Goss has been a good but not great jump shooter throughout his time in college as he made 36.8% of his three point shots as a junior, but will need to improve his mechanics to be able to get his shot off against NBA defenders. He is able to knock down catch and shoot opportunities when left open but with his big dip and slow release he struggles with his efficiency when closely guarded. These flaws in his mechanics also limits his success off the dribble, where he made just 32.6% of his attempts last season. With the ball in his hands so much, he will need to be more of a shooting threat off the dribble in the half-court which might require some changes to his mechanics.

Defensively, Williams-Goss has improved over his collegiate career and while he isn't an elite prospect with his average quickness, he does impact the game on this end with energy and smarts. He has been willing to take on the toughest defensive assignments, guarding players anywhere from the point guard to small forward positions and isn't one to back down from contact. This will allow him to be a versatile defender as he could be able to guard several different positions depending on his team's need. He may not become a lockdown defender with his size and lack of lateral quickness, but he showed a willingness to defend and a mental toughness to stay in front of his man.

Williams-Goss was the best point guard rebounder in our top 100, tracking down 6.6 defensive rebounds per 40 minutes. He has a strong frame and is willing to mix it up in traffic to help his team rebound and then lead the break in transition. He also showed some impressive instincts as well, using his length and quick hands to generate 2.1 steals per 40 minutes.

Williams-Goss does a lot of things to help his team win on both ends of the floor and although he may not be the flashiest point guard prospect in this draft class, he fills several roles teams are looking for out of their point guard depth as a steady handed offensive player and versatile defensive presence. If he can become a more consistent shooter and show that his game can translate against more athletic NBA guards, he could find himself on a NBA roster as a backup or third point guard who can see time at either backcourt spot.
Read Next...